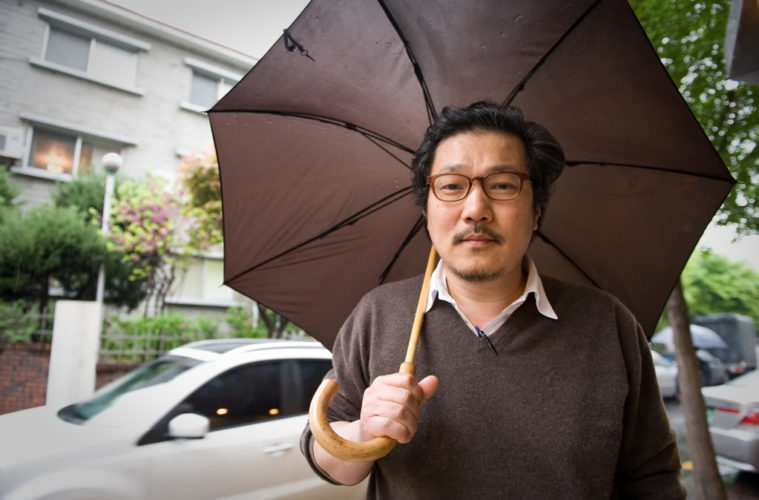 Update: The title (Yourself and Yours) main cast (Kim Joo-hyuck and Lee You-young; not the Right Now, Wrong Then stars), and synopsis for Hong‘s 18th feature have been unveiled. Read more below, thanks to Hong Sang-soo Web and Finecut:

“The mother of the painter Youngsoo is gravely ill. Youngsoo hears that his girlfriend Minjung drank with a man and fought with him. They argue that night, and Minjung goes out, saying they shouldn’t see each other for some time. The next day, Youngsoo looks for her, but can’t find her. Meanwhile, in Yeonnam where he lives, Minjung or some women who look identical to her go around meeting different men. Youngsoo wanders and fights with himself, which is the same as fighting with the world; while Minjung or the other women, resembling the image of her in his fears, wanders seeking the Good man she’ll never met. One day they meet again, stop fighting, and it’s so nice, it’s hard to believe”

Not exactly slowing his roll, Hong Sang-soo is already shooting the follow-up to last year’s Right Now, Wrong Then — one of the finest films we saw in 2015, and one likely to end up on a few best-of-2016 lists after getting a release on June 24th — all the while reuniting with leads Jung Jae-young and Kim Min-hee. Information on his 18th feature remains essentially non-existent to outsiders, but such is my enthusiasm for his work, arguably the best streak in modern cinema, that even a brief notice seems worthwhile. [Korean Film and Keyframe)

Also vague is a report from The Wrap that Leonardo DiCaprio will reunite with Revenant scribe Mark L. Smith for Conquest — a project about which nothing else (save for the involvement of Paramount and producer John Davis) is known. But there you have it.

Here are two casting stories out of Berlin: first, THR tell us Brendan Gleeson, director Jonathan Teplitzky (The Railway Man), and writer Chris Nyst have partnered for Mr. Cranky, a crime comedy centered on “a crime boss who, after the death of his ex-girlfriend, finds himself charged with taking care of her seven-year-old daughter.” Metro International Entertainment are backing the project.

Meanwhile, Deadline have learned that J.K. Simmons and Julie Delpy will lead The Bachelors, an Ordinary People-esque drama helmed by Kurt Voelker (Sweet November). In the picture, a widower and his 17-year-old son “find their lives transformed” upon moving Los Angeles and finding, among the other changes endemic to a location shift, “two extraordinary women coming into their lives.” (We can guess where and how Delpy enters the ring.) George Parra (a frequent collaborator of Alexander Payne and David O. Russell), Matt Baer (Unbroken), and Windowseat will produce the project; shooting begins next month.