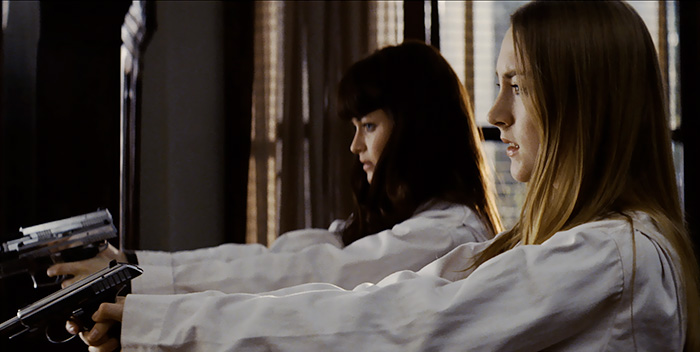 Oscar-winning screenwriter Geoffrey Fletcher has kept busy post-Precious as a Columbia University and NY Tisch School adjunct professor, the driving creative force behind Bombay Sapphire’s The Imagination Series, and collaborating with Doug Liman on a new film entitled Attica about the 1971 prison rebellion. Despite all this, however, it’s his directorial debut Violet & Daisy that has him in the spotlight once again.

I had pleasure of speaking with the soft-spoken and introspective artist about the film’s genesis, its journey to the big screen, and the essence of cinematic storytelling. His is an intelligent voice Hollywood would be keen to utilize more often to help breathe fresh air into an industry often derided for its stagnancy. With an ability to entertain as well as spark conversation, his newest work is ready to breakthrough its preconceptions and intrigue those possessing the kind of open mind it deserves.

—
The Film Stage: To start off, I was wondering where the impetus for writing Violet & Daisy came from?

Geoffrey Fletcher: I’ve always loved the crime genre and the coming-of-age genre as well. I thought it would be interesting to combine the two while following two young women who journey towards their own humanity. I thought early on in the writing process [that] these characters started to speak back to me. So many possibilities came up in terms of entertainment value and humanity that they inspired a story that starts and ends in starkly different places.

So was it all started with the two titular characters? Was the James Gandolfini character [Michael] there too or did he come out of how you progressed the girls’ story?

His character came shortly after theirs. But certainly those two started first.

I noticed so much detail in this film underneath the surface—visual detail. I think you gain a lot in subsequent viewings. There are so many prevalent motifs like airplanes and all these other carefully placed artistic decisions. Could you perhaps shed some light on those?

Sure. I think that there’s a lot of opportunity to tell stories in cinema with the imagery as much as the characters. There can be a lot of real estate in each frame—a lot of depth in the frame—to incorporate additional elements that further tell your story. It can be part of the design for the film to create additional layers as long as they all service the same theme and ideas. And I think this also lends to there being so many different ways to interpret what’s happening. To me, I kept seeing this whole thing as an escapist fantasy. That maybe all these flowery named killers are fractured psyches of one abused girl—a subject that comes into play with a competing hit team. Could you speak about the depth of your script being so open-ended to allow those interpretations? And being that you studied psychology at Harvard—how were you hoping audiences would respond?

I was hoping to hear responses like the one you just gave me. I think at best a film is a dialogue between the audience and the filmmaker. And much like life, it doesn’t always have to give concrete answers even though my reasons as far as portraying certain things in a film are concrete.

If I were to liken filmmaking to painting: I like to leave a little room on the canvas for you as the audience. It really is a dialogue and if it is to reflect real life it should lead you to interpret certain meanings or certain aspects of it.

The result is that something very specific to me might be something very different to you. But it will reach you in a meaningful way that is no less valid than the way I interpret it. One of the best things someone could say to you after seeing your film is that they thought about it later. And when you look at the premise of this film, I think that people will be surprised about how much is going on in it visually, thematically. And they will certainly be surprised by the fact that it starts and ends in such starkly different places [along with] the genres that it bends and blends. And with that dialogue, you’ve assembled this amazingly astute cast that subvert their own character tropes and preconceptions. I mean, I’ve never seen James Gandolfini better than he is here. How was that dialogue with them? How did they respond to the script?

Early on we all knew that we were creating a very particular world and all these actors jumped in headfirst. I think their work is remarkable. I think you’ll see a side to James Gandolfini that you’ve never seen before. The same goes for Saoirse Ronan and Alexis Bledel. And even though Danny Trejo is an underworld figure, he is a different kind than you’ve seen before. And it extends—if you look at Marianne Jean-Baptiste, you’ve never seen her like this before. So, to me it’s a thrill to see Saoirse Ronan next to Danny Trejo in a scene. Or James Gandolfini facing off against Alexis Bledel.

And through it all you have a carefully timed cadence to the characters’ dialogue that recalls Quentin Tarantino or David Mamet. With that kind of lyricism to the dialogue alongside the fantastic soundtrack you’ve compiled, was that rhythm all on the page? Did you work that in later? And did you have those specific songs in mind?

Well, before I start a film I have some ideas for some songs that might work, but inevitably the film tells me what it wants in terms of music. As much as you construct a film, there comes a time where you really need to listen to that film in terms of the music that works. In terms of its soundscape. In terms of its editing. In terms of its pace. By the end of all that hopefully the spirit of your original idea is still intact. Having won the Adapted Screenplay Oscar for Precious with Violet & Daisy coming together shortly thereafter, did you find the win helped open some doors for you? Was everything in motion already? And maybe you could talk about the two-year process from your TIFF premiere to it hitting theaters this week?

Well, there was help from Precious even before the Oscars. People finally listened. The script was very well-received and a lot of astounding actors were interested [along with] a number of financiers.

[As for] your other question—the cut shown at TIFF [2011] was not the final cut. That was completed in 2012. And several great companies were very passionate about the film. Once we partnered with Cinedigm, then it was only a matter of the best time to release the film.

As a final question, one thing that has kept coming up while preparing for this interview is your short film Magic Markers. Besides New York University’s film curriculum, is there any way to see it? Do you have any plans to release that somehow?

No, I don’t. I think that it would be a process because of clearing rights or clearing them again if it’s expired. But that film certainly changed my life. It’s reception led to other opportunities. It led directly to Precious. But that was a 16mm, surreal, black & white and color film.