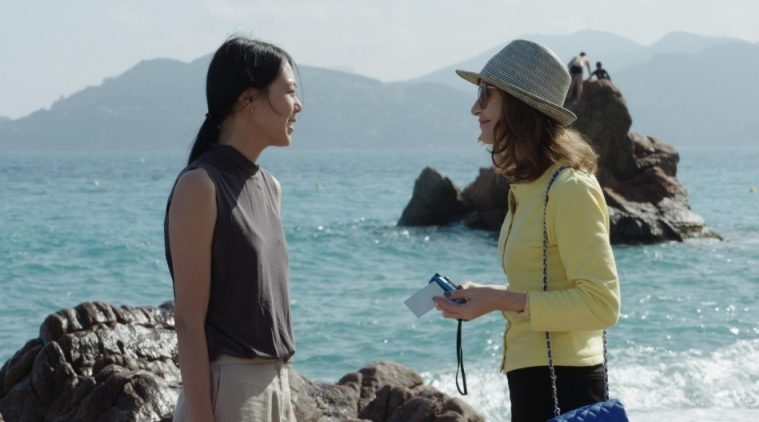 Amongst our most-anticipated of the Cannes line-up are the next two films from Hong Sang-soo, who brought one of the year’s best films so far to Berlinale with On the Beach at Night Alone. Premiering as a Special Screening is a film he actually shot at the festival, Claire’s Camera, which stars Isabelle Huppert and Kim Min-hee, following a part-time high school teacher and writer. Then he will also be in competition with the black-and-white drama The Day After.

Starring Kwon Hae-hyo and Kim Sae-byeok, along with Kim Min-hee (who is also in Claire’s Camera), the story of The Day After follows a woman who begins a job at a publisher, but gets involved in his boss’ affair when the boss’ wife mistakes her for his his mistress, a co-worker who he actually just broke things off with. The first trailers, clips, and posters have now arrived for both, all of which can be seen below ahead of our reviews.

During a business trip to the Cannes Film Festival, Manhee is accused of dishonesty by her employer, and licensed. Claire (Isabelle Huppert), takes a walk in the city to take pictures with her Polaroid. She meets Manhee, sympathizes with her, takes a picture. Claire seems able to see the past and the future of Manhee, thanks to the mysterious power of the beach tunnel. Now Claire decides to accompany Manhee to the cafe where she was fired. This is the moment to discover the power of Claire at work …

Areum is preparing to live his first day of work in a small publishing house. Bongwan, his boss, had a romantic relationship with the woman Areum replaces. Their connection has just ended.
That day, like every day, Bongwan leaves the marital home long before dawn to go to work. He keeps thinking about the woman who left.
That same day, Bongwan’s wife finds a love letter. She arrives at the office without warning and takes Areum for the woman who left.