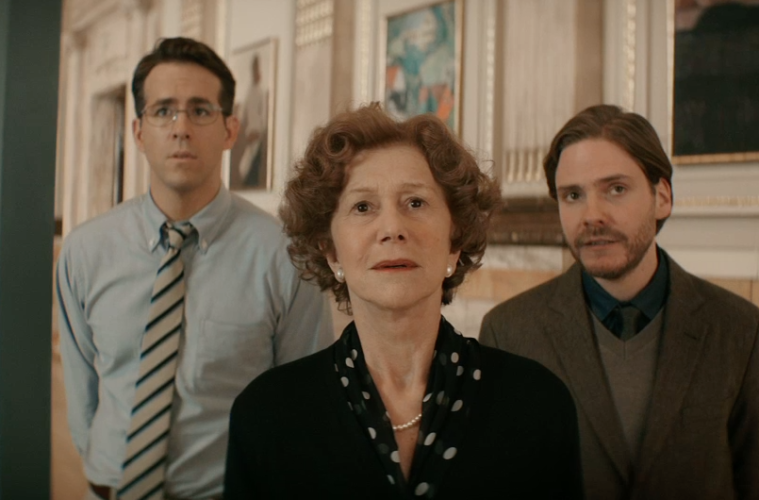 If The Monuments Men didn’t provide enough drama pertaining to stories about reclaiming paintings looted by the Nazis, then you’ll be pleased to find another film with similar themes arriving next year. Instead of the events during wartime, however, Woman in Gold takes on fairly recent events, under the direction of My Week with Marilyn‘s Simon Curtis.

Helen Mirren portrays the real-life character of Maria Altmann, who, while in her 80’s, attempts to track down five paintings looted by the Nazis. The most famous of the pieces is Gustav Klimt’s The Lady In Gold, Portrait Of Adele Bloch-Bauer I, which she (spoilers!) finally received, along with the others, in 2006. Ryan Reynolds plays her lawyer Randol Schoenberg who goes up against the Austrian government, and today the first trailer has dropped. Check it out below for the film also starring Daniel Brühl, Katie Holmes, Charles Dance, Elizabeth McGovern, and Frances Fisher.

Academy Award winner Helen Mirren stars in the incredible story of Maria Altmann, a Jewish refugee who is forced to flee Vienna during World War II. Decades later, determined to salvage some dignity from her past, Maria has taken on a mission to reclaim a painting the Nazis stole from her family: the famous Lady In Gold, a portrait of her beloved Aunt Adele. Partnering with an inexperienced but determined young lawyer (Ryan Reynolds), Maria embarks on an epic journey for justice 60 years in the making. Woman in Gold opens next year.