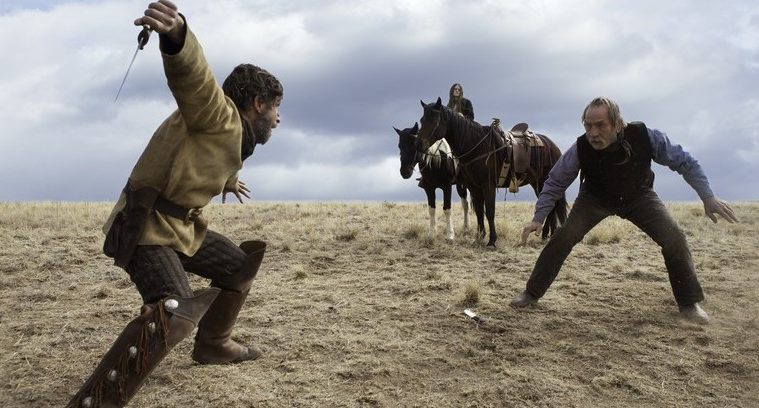 While he directed the TV movie The Sunset Limited a few years ago, Tommy Lee Jones‘ last theatrical feature was 2005’ s The Three Burials of Melquiades Estrada. He’s now returning nearly a decade later with the western drama The Homesman. Adapted by Jones himself from Glendon Swarthout‘s novel, the story follows him as a down-and-out man who gets recruited to take three women on an odyssey from Nebraska to Iowa.

The first trailer has now landed today, which comes from France, where it’ll theatrically release there next month. This is also a likely indicator it’ll hold its world premiere in the country at the Cannes Film Festival, and we’ll find out this week if that’s indeed the case.

The footage is fairly impressive, and we’re always in a good mood for another worthwhile entry in the genre, so check it out below, along with the first stills, for the film also starring Jones, Hilary Swank, Hailee Steinfeld, Meryl Streep, Tim Blake Nelson, James Spader, William Fichtner, and Jesse Plemons. The Homesman is expected to premiere at Cannes and is awaiting U.S. distribution.