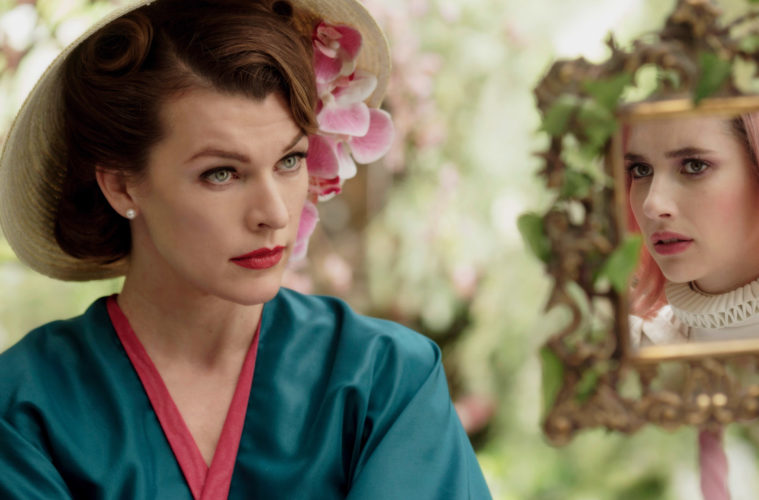 Premiering earlier this year at Sundance Film Festival, the sci-fi fantasy Paradise Hills tells the story of a seemingly idyllic treatment facility in which young women are sent to strive for perfection. Co-written by Nacho Vigalondo, who knows the sci-fi genre well, it’s directed by Alice Waddington and ahead of a fall release, the first trailer and poster have now arrived.

Starring Emma Roberts, Danielle Macdonald, Awkwafina, Jeremy Irvine, Arnaud Valois with Eiza Gonzalez and Milla Jovovich, THR said in their review, this “decidedly loopy work is positively overstuffed with wacky ideas and visual excess, which will make it divisive viewing, even among receptive festival audiences. It’s best to assume the filmmakers have their tongues at least somewhat in cheek, and just embrace the crazy as a pulpy camp indulgence, like some kind of post-feminist Barbarella meets The Handmaid’s Tale.”

On an isolated island, Uma (Emma Roberts) wakes up to find herself at Paradise Hills, a facility where high-class families send their daughters to become perfect versions of themselves. The facility is run by the mysterious Duchess (Milla Jovovich) where calibrated treatments including etiquette classes, vocal lessons, beauty treatments, gymnastics and restricted diets, revolve all physical and emotional shortcomings within two months. The outspoken Uma finds solace and friendship in other Paradise Hills residents — Chloe (Danielle McDonald), Yu (Awkwafina) and Mexican popstar Amarna (Eiza Gonzalez). Uma soon realizes that lurking behind all this beauty is a sinister secret. It’s a race against the clock as Uma and her friends try to escape Paradise Hills before it consumes them all Paradise Hills this theaters and VOD on November 1.