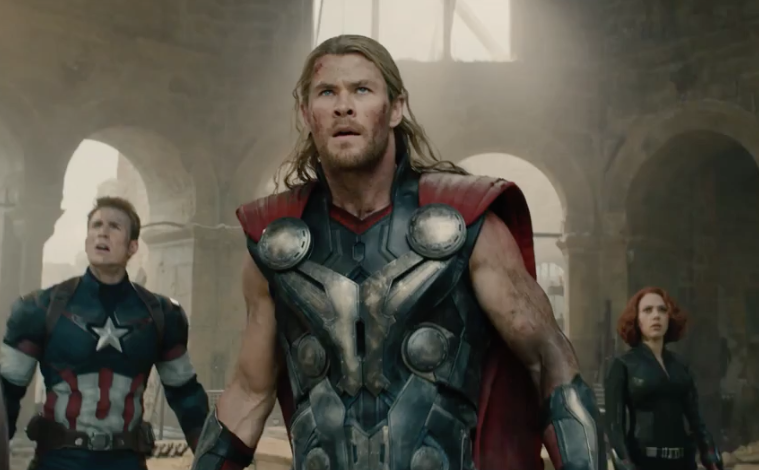 While we did throw out a joke earlier today, the first trailer for Avengers: Age of Ultron has indeed made its way online. Coming from Joss Whedon, the follow-up to Marvel’s record-breaking 2012 hit will be arriving in theaters next summer and features the return of Robert Downey Jr., Chris Evans, Chris Hemsworth, Mark Ruffalo, Scarlett Johansson, Jeremy Renner, Samuel L. Jackson, and Cobie Smulders.

They’ll go up against James Spader as Ultron, “a terrifying technological villain hell-bent on human extinction,” bringing along Elizabeth Olsen and Aaron Taylor-Johnson to help fight. The preview contains the teaser-centered action and introductions one might expect. There’s certainly going for a darker tone here, and we’ll find out early next summer if they’ll pull it off. Check out the trailer below which will likely be attached to Big Hero 6 and Interstellar. Marvel Studios presents “Avengers: Age of Ultron,” the epic follow-up to the biggest Super Hero movie of all time. When Tony Stark tries to jumpstart a dormant peacekeeping program, things go awry and Earth’s Mightiest Heroes, including Iron Man, Captain America, Thor, The Incredible Hulk, Black Widow and Hawkeye, are put to the ultimate test as the fate of the planet hangs in the balance. As the villainous Ultron emerges, it is up to the Avengers to stop him from enacting his terrible plans, and soon uneasy alliances and unexpected action pave the way for an epic and unique global adventure.