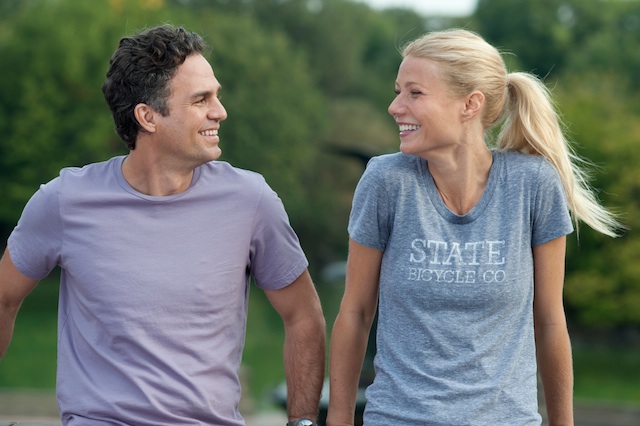 Last year we got what seemed to be the definitive serious sex addict drama with Steve McQueen‘s Shame, highlighted by a stirring performance from Michael Fassbender. On the other side of things, The Kids Are All Right co-writer Stuart Blumberg seems to be taking a lighter approach for his directorial debut Thanks For Sharing.

Leading the ensemble is Mark Ruffalo, who is coming off his hit role in The Avengers. He is joined by Gwyneth Paltrow, Tim Robbins, Joely Richardson, Patrick Fugit, Josh Gad, Isiah Whitlock Jr. and Alecia Moore (or, Pink), the dramedy centers on “a group of unlikely friends brought together through their shared determination to recover from sex addiction as they try to forge meaningful relationships for the first time in their lives.” Check out the first stills and an early poster below.

From the Academy Award nominated writer of The Kids are All Right, Thanks for Sharing is a touching and unpredictable comedy that follows three sex addicts as they struggle to function in society while maintaining meaningful relationships. Along the way, Adam (Ruffalo) attempts to forge a relationship with Phoebe(Paltrow), a wildly independent and beautiful woman who has sworn off dating addicts after breaking up with an alcoholic. Mike (Robbins) is married to his high school sweetheart, but becomes as addicted to his 12 step recovery program as he does to sex. Neil(Gad), on the other hand, hides a camera on his tennis shoe to secretly film up women’s skirts – all while trying to convince his friends that he can live a life without sex. Throughout the film, they each deal with their addictions in different and hilarious ways in this unusual and sweet comedy.

Expect Thanks for Sharing to hit the fall film festival circuit.