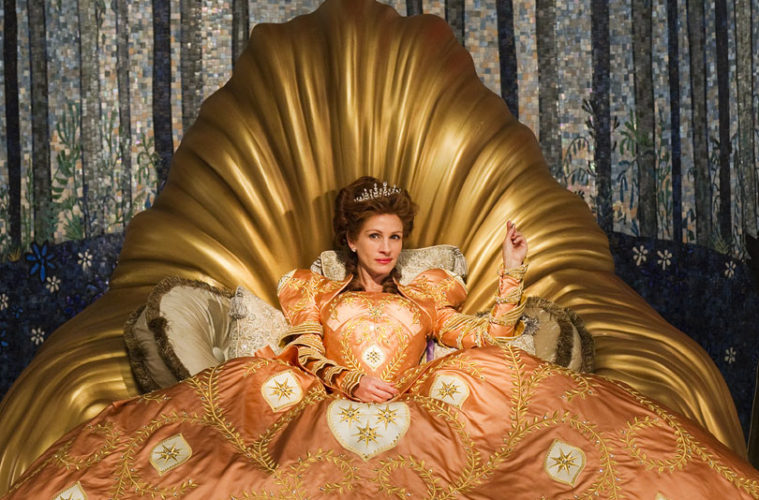 There is a battle on the horizon and it isn’t just contained in the plot of these upcoming films. Universal and Relativity Media each have Snow White films and after a release date shuffle, the openings are (currently) set, and now the marketing brawl begins.

Tarsem (The Fall, Immortals) is directing Relativity’s film, which looks more family-friendly and including the bright palette we expect from the visual expert. EW have unveiled our first look at Julia Roberts as the Evil Queen in her golden throne. And above we have a new look at our Snow White (Lily Collins), with her dwarves (Jordan Prentice, Joey Gnoffo, Sabastian Saraceno, Martin Klebba, Mark Provinelli, Ronald Lee Clark and Danny Woodburn).

I’d much rather have our first reveal of characters be an actual still or an on-set shot, instead what seem like advertisements for costume designer Eiko Ishioka. I have no doubt the Oscar-winner will provide the flair also seen in Tarsem‘s upcoming Immortals and The Fall, but this is more like playing dress-up then giving us any sense of what the actual film will hold. Check them out above and below. Update: Yahoo has posted new photos of the cast including Armie Hammer and Nathan Lane, as well as more from EW. What do you think of the first look of Roberts? Which film are you most looking forward to?