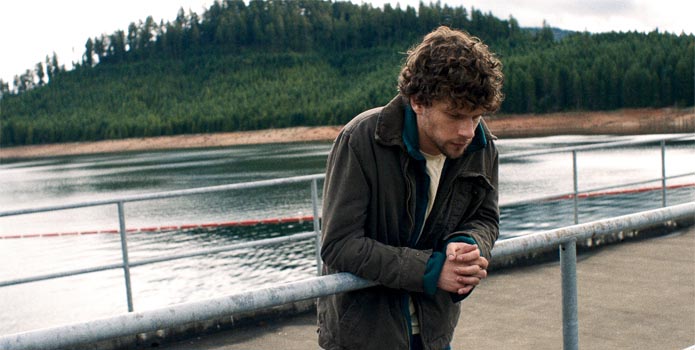 In a landscape where so many films are “seen” before any of us sit down for a viewing, it’s a special kind of pleasure not to have heard much about Night Moves, the new film by Kelly Reichardt (Meek’s Cutoff, Old Joy). Over the next few weeks leading up to its round of festival debuts, our first signs of life have emerged: two photos showing stars Jesse Eisenberg and Alia Shawkat, the former’s facial hair making an impression that can’t be overstated.

In co-writing the screenplay with her Meek’s Cutoff partner, Jon Raymond, Reichardt has crafted the story of three eco-terrorists (Eisenberg, Peter Sarsgaard and Dakota Fanning) who face heavy personal quandaries upon making plans to blow up a dam. (A little outside the Wendy and Lucy template, clearly.) I, like many of the director’s fellow admirers, are thrilled to see where this eventually heads, and its arrival can’t come soon enough — in the meantime, enjoy what’s been provided.

One image is available above (via TIFF), while Eisenberg and Shawkat can be seen below (via Tumblr): Night Moves will premiere at the Venice International Film Festival later this month; no U.S. distributor has been announced as of this writing.

Are you looking forward to Reichardt’s next feature? Any specific expectations?