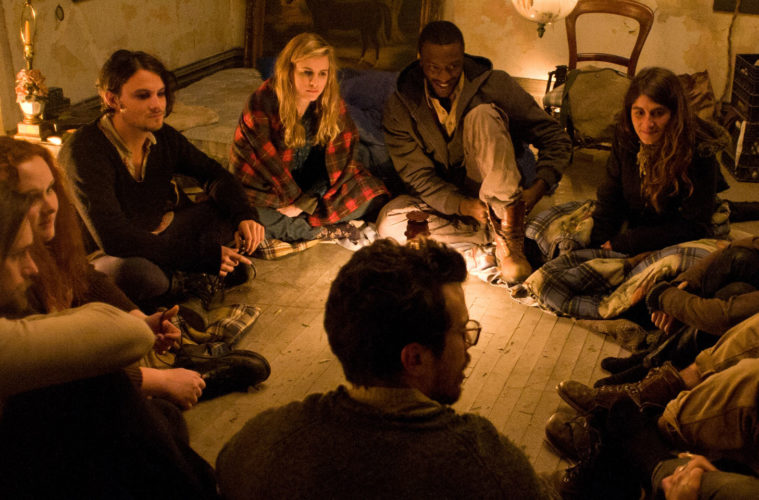 [First Look] Brit Marling & ‘Sound of My Voice’ Director Head ‘East’; Felicity Jones Will ‘Breathe In’ For ‘Like Crazy’ Helmer

Two of the biggest success stories of Sundance Film Festival 2011 were Drake Doremus and his top prize-winning romance drama Like Crazy and Zal Batmanglij‘s low-budget cult film Sound of My Voice. Two years later and both helmers are now set to return to Park City with their stars in new projects and we’ve got the first images from below.

First up, Batmanglij’s The East brings back star and co-writer Brit Marling as “an operative for an elite private intelligence firm who goes into deep cover to infiltrate a mysterious anarchist collective attacking major corporations. Bent on apprehending these fugitives, she finds her loyalty tested as her feelings grow for the group’s charismatic leader.” Above one can see Marling, alongside co-stars, including Alexander Skarsgård, Ellen Page, Toby Kebbell, Shiloh Fernandez and Patricia Clarkson.

We’ve also got the first image from Doremus’ next film, revealed as Breathe In, which sees Like Crazy star Felicity Jones as “a foreign exchange student  who arrives in a small upstate New York town and she challenges the dynamics of her host family’s relationships and alters their lives forever.” Below one can see the first still of Jones with Guy Pearce, in the film also starring Amy Ryan and Mackenzie Davis. Check back for updates on both highly-anticipated films from the festival.