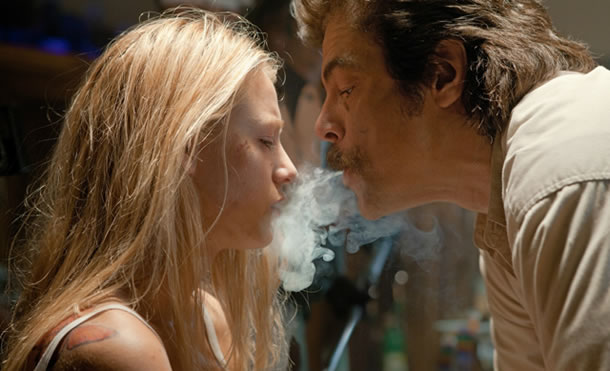 I know it’s difficult to get excited about a new Oliver Stone film these days. JFK, Nixon, Platoon and Natural Born Killer are some of my favorite films, but World Trade Center, W., and Wall Street: Money Never Sleeps don’t exactly measure up to the director’s earlier – and far angrier – output.

When Stone ditches overt politics, he pulls out interesting oddities like the under-rated U-Turn. The forthcoming Savages, based on Don Winslow‘s crime novel, sounds far more promising. We have our first look of Benicio Del Toro, blowing nasty-looking smoke into Blake Lively‘s face, courtesy of Rope of Silicon.

Del Toro plays a henchman for a Mexican drug cartel – led by Salma Hayek, by the way – who kidnaps Lively’s character when her two pot-growing boyfriends from Laguna Beach (Kick-Ass‘s Aaron Johnson and John Carter‘s Taylor Kitsch) resist the cartel’s muscle. They’re stoned-sounding plan? Pay the ransom, all the while scheming to get her back some other way, cash out, then vanish. I haven’t read the book, but I’ll take a wild guess and say that things don’t quite work out as expected.

Oliver Stone returns with this material to the drug-and-mob themes of Brian DePalma‘s Scarface, which Stone wrote while attempting to kick a nasty cocaine habit. Whatever the man was trying to do with his uneven filmography over the past decade, maybe he’s gotten it out of his system, but the idea of pairing Stone with this material is very exciting.

Are you an Oliver Stone fan? Does Savages sound like a return to form for Stone?