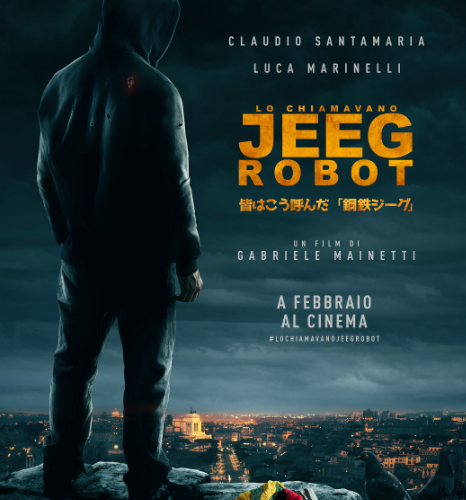 If you’re just about numb to comic book films these days, then allow this quaint Italian picture to cleanse your palette. The debut feature-length effort from from Gabriele Mainetti seems like a fresh yet familiar take on this type of film; it also reminds one how much fun this type of story can be sans all the machismo and infighting. They Call Me Jeeg Robot is an impressive piece of work, with violence to spare, but it doesn’t glamorize heroes or villains. That’s an important thing to note because it also earns points for originality even if the story is of the passé “hero born of toxic waste” variety.

It’s rare to pair the words “origin story” with praise, but there’s no hiding that fact here. Although, this is more of comic film seen through the lens of something like Taken or Layer Cake. For once, someone who doesn’t deserve the gift becomes powerful. But Enzo (Claudio Santamaria), the low level misanthrope, soon learns how he can help, not pursue selfish gains. Now, I could go on about the restraint and internal struggle in Claudio Santamaria‘s performance. But I won’t, because it’s much more fun to talk about the similarly put-upon villain.

The real gem is Fabio (played by Luca Marinelli), and there are no words to describe how unhinged this performance is. It’s not often you get a cold-blooded baddie who can lose it over not getting a phone in his preferred color. Mainetti offers some shock value, but then does a straight-shot for the absurd. The same character is now dressed in laughable ’80s attire singing in a night club. He’s a total wingnut that needs to be seen just for the speed at which he changes gears.

The brutal violence that Mainetti brings to screen will have one imagining how our protagonist and his foil would square off against any Hollywood-assembled comic film. On that note, Luca Marinelli is so oddly capable of playing the Joker that it’s unfortunate Jared Leto beat him to the punch. There is some cause and effect which help advance the affect the plot, but despite this insane performance carrying us along, there still seems to be a void left when it comes to true motivation for all characters. Enzo and Alessa (Ilenia Pastorelli) have a Leon and Matilda kind of relationship, but their development doesn’t feel legitimate and Fabio’s arc seems bypassed entirely.

Holding the film back from being more enjoyable is how things flip back and forth unpredictability. The roots of the narrative, from Nicola Guaglianone, are a gritty crime drama. Yet, even with the preposterous plot, there isn’t much balance between the serious beats and the wacky ones. More times than not, the story comes across straight-laced (imagine Attack the Block with no jokes), but there are plenty of opportunities to have a laugh at itself. Many scenes are void of music, which helps feign realism, but others are so ripe with dark humor, one can’t keep from laughing out loud.

For example, if our toxic waste-enhanced hero is any more noteworthy than the villain, his hobbies can be limited to two: eating vanilla pudding while smoking a cigarette (that takes talent), and watching porn. He’s probably not the kind of hero meant to grace the walls of any kids rooms. Then again, you probably could’ve said the same thing about Deadpool at one point. Still, Enzo is a superhero in suede shoes. That makes this just entertaining enough to be more than a footnote in the alternative hero category (Mirage Man, Super, Kick-Ass, etc.), but also make one want to see more once the credits roll.

Mainetti does his best to ground the highly preposterous, but still have a little Ernesto Díaz Espinoza-style of levity. Most of the time, the bizarre juxtaposition of different tones is on par with what you’d see in Japanese films. Despite being a little heavy and disjointed, They Call Me Jeeg Robot will make you want to jump in your local landfill or waste dump and have your own irreverent, mad-cap fun.

They Call Me Jeeg Robot screened at Fantastic Fest and opens on March 17.