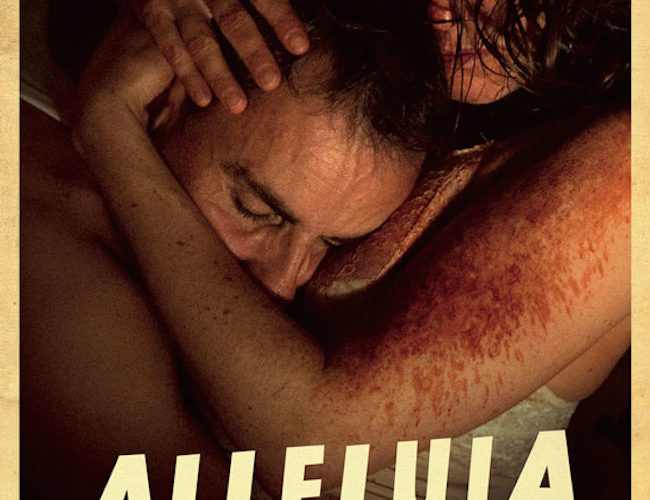 Fantastic Fest is where you come to see the weird and Alleluia has that quotient in abundance. The film, which comes as the second part of a soul-crushing trilogy by director Fabrice Du Welz, follows what happens when passion and violence mingle to disastrous results. Gloria (Lola Dueñas) is lonely and saddled with an unsatisfying life when she meets the charming Michel (Laurent Lucas) online, who turns out to be a swindler. But her interest in him lingers and she convinces him that she is meant to be with her. The danger, though, is that she’s extremely jealous. What follows is a delve into what it means to know that someone cares for you and understands you, yet is a destructive force in your life. Could either of these people ever have soul mates? Likely not. But it doesn’t keep them apart.

The film, which is loosely based on the true murder spree by the Honeymoon Killers (Martha Beck and Raymond Fernandez), weaves a darkly comic tale. Michel has obsessions — he can’t help but want to seduce women sexually. He relishes the power it gives him, but he’s also really into feet. Like, in to them. Soon we come to realize, this film doesn’t really have boundaries. Gloria, being lonely, falls for him and doesn’t care what it takes to be with him. She’ll kill to show her love, and she even does in fits of jealousy. Michel has shades of occult influences and at one point Gloria even asks if he is a sorcerer. Together they go around scamming single women; Michel has been doing this for years and is a slick operator. The set-up is that Gloria is his sister and they need a place to stay. They set up shop together but, as you might expect with a woman that is willing to love a scammer and go into cahoots with him, she is deeply troubled. She throws fits when he doesn’t sleep with her at her whim, even while they are posing as siblings under someone else’s roof.

There are some darker elements in which the director handles in perhaps an odd manner, not quite cohering to the intended effect. At one point, out of the blue, Gloria bursts into song while on the verge of doing something incredibly violent. It’s an oddity that eventually ends up working as a whole on the film but it initially feels out of place. The biggest standout, however, is a fire dance scene that is at once entertaining and incredibly distributing.

When it comes to Gloria, full on tantrums are thrown and it makes her seem like a child. But even so, Michel is connected to her in ways that are stronger and more discomfiting than anything healthy. It’s the common thread that runs through the film. This is just a bleak, dark, and yet humorous experience that is full of twists and turns that are at times truly heartbreaking. It’s not even necessarily the reality of what takes place on screen, but the way that you know their relationship has real-life counterparts, even if they are less dramatic and cruel. If Fantastic Fest is about discovery and seeing the kind of film not built for every taste, the blood-soaked, sex-fueled thriller that is Alleluia is the perfect fit.

Alleluia is screening at Fantastic Fest and will be released by Music Box Films on July 17th.