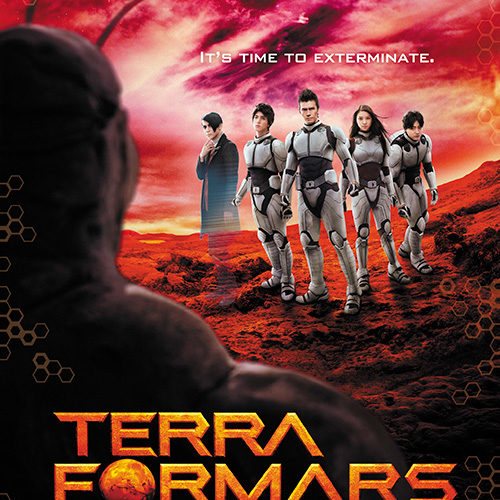 It’s the tail end of the twenty-first century and Earth has nearly overstayed its welcome with dwindling resources and over-population. Scientists believe they can release the CO2 pockets underneath Mars’ surface and move the Red Planet from -50 degrees Celsius into a human-friendly temperature and atmosphere. So mankind sends rockets of moss and cockroaches to commence the process, a half-century passing before a team of colonists can finally journey forth. Everything should be ready for this hand-selected group under Ko Honda’s (Shun Oguri) supervision: go to Mars, kill the cockroaches, and return home with stories of our salvation via a new frontier. It sounds so simple and yet no one is prepared for what they’ll find because no one but Honda and the Japanese government know the truth. That itself is a wild premise ripe for science fiction fun, but manga creators Yû Sasuga and Kenichi Tachibana are hardly finished. The secret they’ve given Honda and his right-hand Sakakibara (Rila Fukushima) is the fact that those original roaches evolved at astronomical speed thanks to space radiation. They are now humanoids (think The Tick but black instead of blue) with lightning speed and a violent swarm mentality. Known as the titular terraformars, these creatures can cut through flesh as though it were paper. In order to combat this strength Honda must genetically alter his welcoming party with an especially potent gallery of bug DNA. Recruiting only criminals in desperate need of cash for the job, no one is the wiser until the time comes to fight.

Adpated by Kazuki Nakashima and directed by cinematic icon Takashi Miike, Terra Formars has seen a lightning quick evolution itself from serialization in 2011 to an ongoing animated television series in 2014 to this live-action take. The latter feels like a living cartoon, its embracement of the medium’s character design and implausible insanity brought to fruition with meticulous care. You only have to look up the cartoon on IMDB to find three images that could well be storyboard slides for Miike’s vision. He stays true to the look of the cockroaches and super-powered antiheroes charged with their respective bug’s natural horrors. While some instances seem Claymation and others are covered in blowing dust to mask shoddy effects, everything is steeped with the manga’s inherently absurdist, darkly kawaii tone.

Is it a cinematic masterpiece? No. But it’s a ton of fun in its blatant joy at not taking itself seriously. The default villain is Honda because he cons these killers, hackers, and Yazuka into this suicide mission yet he’s hardly malicious when twirling around and showing off his new jacket for praise. Tezuka (Ken’ichi Takitô) is a rapist who turns into a bug shooting virtual rocket fuel from his mouth to save the day; Dojima (Masaya Katô) is the epitome of self-sacrificing Captain stoically stopping those ready to battle in order to provide them safety; and Obari (Eiko Koike) and Osako (Mariko Shinoda) are rendered so cutely that their bugs’ badass shells only manifest into covers for their arms so their faces never morph into monsters.

You have the power-hungry Moriki (Rinko Kikuchi, whose familiarity with American audiences as the most recognizable face included will force us to know a potential early exit is impossible); the tragic, money-hungry Hiruma (Takayuki Yamada); desert-clad Middle East soldier Lee (Kane Kosugi); lonely kickboxer Jin (Tomohisa Yamashita); and wanted murderers Shokichi (Hideaki Itô) and Nanao (Emi Takei) rounding out the main cast. None are exempt from violent deaths of decapitation or fists through stomachs (very few actually survive until the end) and most receive both an emotion-filled, expository flashback and a hyper-stylized, quick-cut Entomology lesson when injecting the substance facilitating their transformations. They are here to taken down some of the silent, club-wielding roaches before ultimately falling prey to their enemy’s ever-evolving strength. It’s screaming, metamorphosis, and dying.

If you don’t expect more than that you should have a good time. And if you’re a fan of the manga itself, you might enjoy it too. I’m not certain on this last point since I know nothing of the original story’s content—maybe Nakashima and Miike took huge liberties in the adaptation—but the aesthetic seems exactingly precise from my seat of cluelessness. Everyone’s intentionally over-the-top in his/her performance, but you’d expect nothing less when each plays a role that turns him/her into a human/bug hybrid. You will laugh at the insanity of this plot device; you need to laugh at it because it will be a long, obnoxious experience if you can’t. Think about those overwrought moments in war movies and multiply them by a hundred.

Sure it’s cheesy and yes it makes no sense, but that’s part of the charm. The production design actually looks pretty good in the spaceship with hologram gags and within Tokyo’s futuristic, 1990-era Total Recall oppressive state. Mars is a tad weaker with the cockroaches stilted in isolated motion and muddy in massive swarm waves of carnage, but this adds to the comedy of what we’re to believe is a serious mission of epic proportions. When the de facto hero’s (Shokichi) first step on Mars has him squeamishly recoiling in fear because he thinks he saw a tiny roach under some moss, you realize you’re in for a disposable treat of popcorn glee. Conspiracy theories about pyramids inject weird color, but the whole is fundamentally a mindless romp.