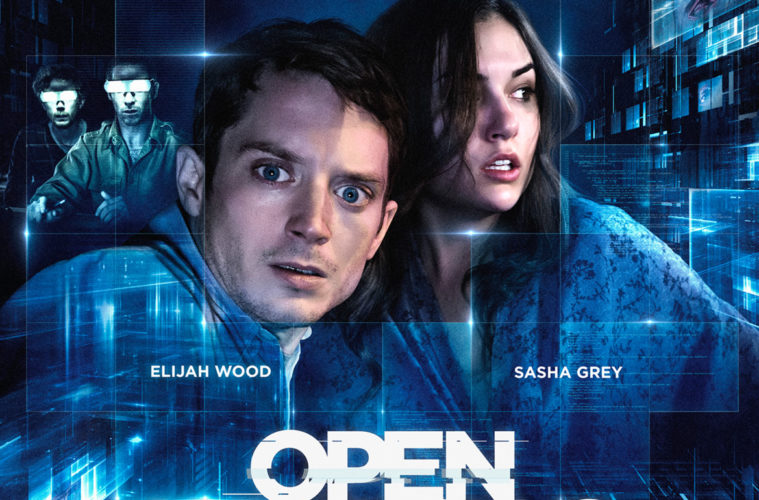 One of the many films to open with the misdirection of a movie within a movie, Open Windows actually earns it, even if the effort it expends in doing so makes no effort in really separating the layers of cinema fantasy. Because while festival programming guides will like to label it as an update of the Hitchcock–De Palma voyeuristic thriller, Open Windows is, if anything, far more like a Feuillade serial: one cliff-hanger after another — which is perhaps why the film runs 100 minutes, instead of the usual gimmick film’s 80 — including criminal underworlds, wild plot twists, and shifting identities.

Attending Fantastic Fest (the film fully aware of its pre-destined genre-festival path) to promote her new sequel, flippant, bored movie star Jill Goddard (Sasha Grey) leaves the event, angered by invasive questions from the geek media. Peering through a live-stream is the obsessive fan, Nick (Elijah Wood), who, after running a website dedicated to her, seemingly has his dreams fulfilled by the contest prize of dinner with her, which is quickly cancelled by the pouty starlet. Yet before any misogynistic rage can kick in, he receives an anonymous call from one who claims to have some inside information on Jill — soon becoming invasive to a sinister degree, sending Nick on a race against time to save her life. Like Kevin B. Lee’s recent desktop essay, the film takes place entirely on a computer screen, weaving in and out of links, video windows, Skype calls, locations, and vantage points, thus being gifted with a kind of continual motion. Yet it still manages to run into the problem of repetitiveness, relying far too much on the same trick; just count the number of shots through the windshield of Nick’s car as he messily navigates through traffic and, inevitably, pedestrians.

Given the chance to rescue her while still peeking through the villain‘s invasive view, this is all the set-up for male escapist fantasy, with even the kidnapper / killer on the other line more like the voice in Nick’s head as opposed to a true antagonist. Especially after his appearance in last year’s Maniac remake, Wood’s aged pretty-boy looks and meek demeanor make Nick all the more susceptible to registering as creepy for an audience.

Grey, on the other hand — and while still a limited actress — is cast (like in Soderbergh’s The Girlfriend Experience) more for the implication, herself being the object of so many (ahem) internet videos. Unfortunately, a more interesting idea late in the game of another character overtaking both the camera’s gaze and the kidnapper’s disappears in a mad rush to the next twist and turn.

Only by the film’s final third does it realize the proper sense of escalation. The multiple-screen conceit becomes more controlled by enlarging its windows to full screen and giving a strict three- or two-point confrontation between our main characters. Perhaps that’s all we can expect from a film only so dependent on intermittent engagement.

Open Windows is currently screening at Fantasia Festival and will be released by Cinedigm.