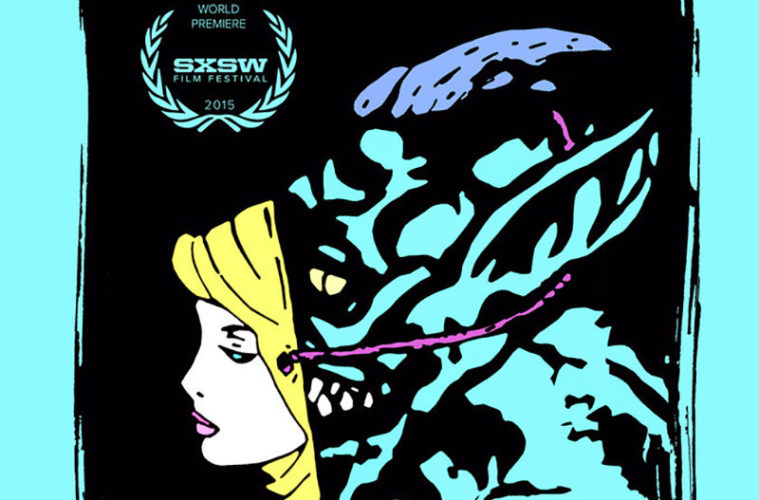 When the industry is inundated with supernatural horror redundancies like it has for the past two decades, work like Edgar Wright and Simon Pegg’s Shaun of the Dead or Justin Benson and Aaron Moorhead’s Spring are necessary to kept things from going stale. A point when audiences simply stop caring does exist. It’s apparently much farther out from the fad’s onset than you’d think America’s attention-deficiency would tolerate, but it will eventually arrive. Perhaps this extended longevity can be attributed to just such offbeat evolutionary leaps retaining enough of their genre’s tropes to be accepted by fans while taking a wholly different direction for added intrigue and nuance that provides enough breathing room to forget we’ve seen it multiple times before. Jordan Galland‘s Ava’s Possessions is this trend’s latest example of a fresh spin on a classic theme.

The beauty of what he’s accomplished is its simplicity. We’ve become so conditioned to horror films depicting demonic possessions that conclude on a bittersweet ending of survival—with the requisite room for sequels immortal entities allow—that the question of what happens next for the victim is all but ignored. We accept that the tragic soul received a hug from his/her loved ones and continues forward into a brighter life and looming therapy bill. Being alive to tell the tale is enough and the wake left by the evil deeds done while out of his/her control are expunged from our memory. Well reality has something different to say and Galland has constructed his comedy to be the mouthpiece ensuring we never forget the collateral damage. Ava (Louisa Krause) did some horrible things and the law requires retribution.

Luckily for her the world in which she lives has endured enough exorcisms to render “I was possessed” into a legitimate not guilty plea. The trouble is that it needs to be proven to avoid jail time similar to an insanity defense. Thus enters the institution known as Spirit Possession Anonymous where recently vacated victims can talk out their fears, work towards asking those they harmed for forgiveness, and strengthen themselves from a statistically inevitable return affair. Group leader Tony (Wass Stevens) takes things super seriously with a handbook and a magical amulet that literally puts the demon back into its host for the purposes of fighting it without the assistance of a priest. He stays close to remove the charm if things go awry, but the goal is to personally take it off to prove you’re healed.

This is the over-arching narrative: salvation from the spirit world through inner strength and confidence. The process’ step of finding those you hurt under the influence, however, opens the door for many forks in the road Ava cannot avoid. One is the brilliantly as-yet unexplained aftermath of her exorcism with Dad’s (William Sadler) neck scratched to hell, Mom’s (Deborah Rush) eye bandaged over, torn up and tossed around furniture, a mysterious blood stain underneath the carpet, and an engraved watch in the sofa. Needing to apologize to the owner who obviously was in her apartment during her involuntary 28-day incarceration—along with strangers, a pimp (Joel de la Fuente‘s Escobar), and hooker (Alysia Reiner‘s Noelle)—she makes some calls, enlists her lawyer’s (Dan Fogler‘s J.J.) help, and stumbles upon a truth she isn’t prepared to face.

What follows isn’t necessarily unique in its content, but it is in the way it unravels. Galland sprinkles in clues as to who was involved in Ava’s dance with the devil yet does so in a way that gets our minds working one way before revealing what happened to be a skewed version of our hypothesis. There’s something fishy going on with her sister Jillian (Whitney Able), future brother-in-law Roger (Zachary Booth), and nice guy Ben (Lou Taylor Pucci) whose path she crosses along the way. Add a new friend who laments the day her own demon left (Annabelle Dexter-Jones‘ Hazel), a daub of black magic courtesy of Carol Kane‘s eccentric purveyor, multiple conspiracies, and waking nightmares of burnt teddy bears that talk and your mind will work overtime conjuring theories to distract you from the actual answers.

At only 90 minutes it does unfortunately drag at times—due more to my impatience in trusting I had solved things despite only guessing half correctly than a gross misstep by the filmmaker—but a new dryly comical joke or situation would always enter to reengage me when my attention wandered. Sadler and Rush are great at delivering such moments through straight-faced worry and ambivalence respectively while the absurdity of Stevens’ Tony directing Possession Anonymous participators towards the light entertains more broadly. Much of the success, though, can be attributed to Krause at its center because her Ava proves extremely relatable and sympathetic. Her attitude in response to her circumstances is a believable mix of fear, frustration, and curiosity. I’d like to think my reaction to being possessed and left to rebuild my life would take a similar tone.

It’s not all comedy as visions of the drumming Naphula’s approach to reclaim her body conjure enough trepidation for the horror label to stick. The genre places in third behind the laughter and mystery sleuthing, but it’s still the story’s backbone. Galland simply found a way to subvert our desire to fear the unknown by making it commonplace. I loved the background details bringing the ramifications of possession into a place of taboo like drug abuse or adultery rather than the supernatural. I was fascinated by human aspects such as a friend uninviting Ava from her birthday because she slept with her boyfriend while under the influence. At one point a stranger even walks up to her swinging a purse screaming, “Demon be gone.” This satirical intelligence easily makes up for any unavoidable conventions in its plotting.