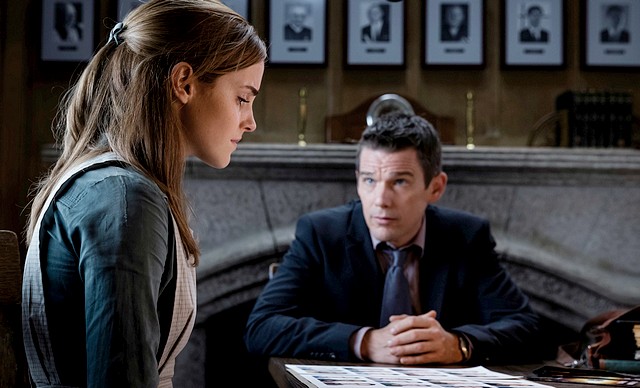 One would not think that a thriller a) starring Ethan Hawke and Emma Watson and b) helmed by The Others‘ Alejandro Amenábar would be dumped so unceremoniously, yet The Weinstein Company — no strangers to such a tactic, if Jean-Pierre Jeunet’s T.S. Spivet and last week’s Jane Got a Gun are just the most recent evidence — will do such a thing with Regression, which opens in three days and, to my knowledge, still has not had a single press screening scheduled. The picture becomes a bit clearer when one looks at the initial round of reviews, a collection that’s at best complementary and at worst, well, you can imagine. Here, it seems, something didn’t exactly click and a major company wishes to get this thing off its hands already.

So less than 72 hours before its U.S. debut, we have a preview that seems designed to make the immediate handing-off an easier bit of business — or is merely indicative of a poor product. Either way, Regression doesn’t look much like a project that serves its great talent (David Thewlis included!) all that well.

Minnesota, 1990. Detective Bruce Kenner (Ethan Hawke) investigates the case of young Angela (Emma Watson), who accuses her father, John Gray (David Dencik), of an unspeakable crime. When John unexpectedly and without recollection admits guilt, renowned psychologist Dr. Raines (David Thewlis) is brought in to help him relive his memories and what they discover unmasks a horrifying nationwide mystery.

Regression will enter a limited release on Friday, February 5.