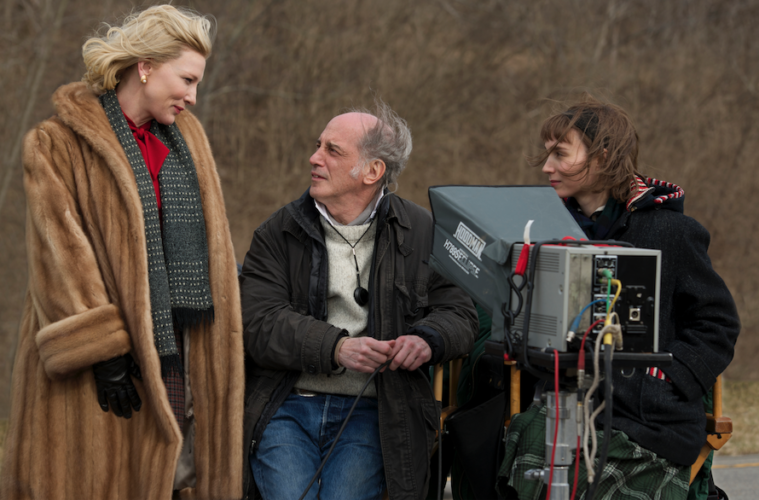 While attending the Camerimage International Film Festival last November, I was fortunate enough to speak with cinematographer Ed Lachman about Carol — one of the biggest titles they hosted, if it filling an opera house for a 10 a.m. screening should serve as any indication. His busy schedule for the day, as well as a few unexpected outside factors, cut this interview short, and a planned follow-up never came through.

With the film now out on Blu-ray, however — click here to find out how you can win a free copy — it’s about time the thing is shared, a decision also justified for a) the way it exhibits Lachman’s intelligence and candor in equal measure and b) the fact that we certainly admire his work, with or without Todd Haynes. (And, of course, we liked Carol enough to already get other talent on the record about their processes.) Abbreviated though it may be, this discussion will make clearer how a film of such cinematographic beauty and ingenuity sprang to life.

The Film Stage: One of my favorite things about Todd Haynes is his background in semiotics, and how signs, symbols, and the like carry such a strong significance in his films.

You’re his main collaborator, at least in terms of making images. How does he communicate with you? Does he lay out meanings and motifs very clearly?

Yeah. That’s a good question. Look: we both come out of art school. My interest was painting and art history, and then I became a cameraman because I took this course at Harvard in film appreciation, and I thought, “Oh, my God, you could pick up a camera and tell stories with images.” Back then, I always represented painters of certain time periods because painters painted the way they did because they came from a certain aesthetic, philosophical, historical, cultural, political position. German Expression is different than Impressionism, which is different than post-modernism or minimalism because of the social environment that those artists lived in and were in reaction to.

So the wonderful thing about Todd is — and what makes him, I find, so unique as a filmmaker — is that he understands language, filmic language, and uses that as a metaphor in storytelling. Let’s say, like, Douglas Sirk. He didn’t do a ‘50s film with Douglas Sirk imagery in Far from Heaven because he wanted to do a Mad Men ‘50s stylization. He was talking about the repression of the ‘50s, of the psychological state that the country was in at the time. Sirk, who came from Brechtian ideas of theater and immigrated to America, used the form of melodrama — or “weepies” or “soap operas,” as we would call them now — as a form to show the repression of the society. And what better way to do that than through a woman? A woman in chains. Here, these women were encapsulated in this picture-perfect world where they couldn’t act on their own needs; or homosexuality or race. So Sirk did it in a very subliminal way.

I think the conceit for Todd was, “Could I tell that story in 2002, and would people think they were better than what that story actually was about?” Because they see it in this very manneristic style. Well, it still works! Melodrama still works in this heightened, manneristic, art-world artifice. It still draws the viewer in, emotionally, to deal with social issues that really were not so far away from our own sense of racial inequality, which we’re around all the time, or sexuality, which, on the surface, seems like it’s changing but is only changing in certain… say, America is a lot different from India or China. Or let’s say we look at a film we did with him: I’m Not There.

What better way to show Dylan’s persona — this multi-faceted figure who’s bigger than life — but do it through culture that he influenced, how pop culture influenced Bob Dylan. So what better way — he was like a chameleon, he was like an actor — than through the cinematic language of the ‘60s and ‘70s? So we referenced Godard, the early New Wave, because Godard was always using sexual politics as a subtext to his story.

And what better way to use when Dylan is fleeing his success and fame is to reference Fellini in 8½, because Mastroianni is feeling his block about making his next film — he’s having a psychological breakdown — so what better way to reference than through Fellini’s 8½, for the Cate Blanchett character? Anyway, so that was an example. Or Richard Gere, doing the anti-hero westerns of the ‘70s — Sam Peckinpah, Robert Altman, and then the film that Dylan was in.

Pat Garrett and Billy the Kid.

Yeah, exactly. So what better way to reference when Dylan flees to his Woodstock, rural, back to the heartland of America, but do it like an outlaw? So now we jump to Carol. What we were looking at in Carol, really, was a similar world but different than the late ‘50s. We looked at different references, but, let’s say, mid-century women photographers. We didn’t reference really the cinema of the late ‘40s, early ‘50s. We referenced the political and social strata of America at the time. And so what better way to do it, because Rooney’s character is a photographer, than to look at women photographers who were really documenting America? Like Helen Levitt, like Ruth Orkin, like Esther Bubley, and then, later, Vivian Maier.

Because these were photographers that were journalists, urban journalists, and experimented with color photography, but also were doing their own artistic photography — art photography. And then if we did look at filmmakers, we looked at someone like George Stevens, and we looked at a film like A Place in the Sun, about the way he made choices with spatial relationships. A large part of the film about subjectivity. It’s a love story — it’s not really melodrama — and it was the subjectivity of the lover and the loved one, and how that shifts. For me, it’s almost like a Fassbinder film: the strength of one being perceived by the other.

I don’t know if this question is off-base, but…

Well, there’s the question of… if female photographers are your inspiration, and if this is from a woman’s perspective, is there something to consider regarding the difference between male and female “gazes” when you’re photographing this film?

I think there is. I looked at a lot of films from, per se, women filmmakers. I looked at Andrea Arnold; I looked at Lynne Ramsay’s work. Those are the two that come to mind. I think a woman’s gaze is different. Like, Blue Is the Warmest Color — is that the title? right? I always get it wrong — to me, is absolutely a male point-of-view of female sexuality. I think Todd… maybe because, being gay, he’s much more sensitive to a woman’s point of view. It’s in the details: things that are suggested without the overtness. And maybe that’s the difference between male sexuality and female sexuality, you know? Maybe that’s it. I don’t know, but… or we’re all male and female. So that part of us.

The movie feels intimate with the characters and sensitive to their situation, so I suppose it’s not on my mind when I’m watching it — but I wonder if someone has a different reaction.

I talked to Matthew Libatique earlier today, and he said he doesn’t take inspiration from films so much as paintings. Do you think there’s something about paintings that are more conducive to a cinematographer’s — or any image maker’s — eye and way of perceiving the world?

I’ll say it this way: films, there is a thematic of a beginning, middle, and end that is part of the storytelling, and the images reinforce the dramatics of the storytelling, and I think this is partly why paintings don’t work if they’re recreated as films. You know, like, say people have taken Edward Hopper and tried to recreate a film out of a Hopper image. The thing about a painting — and this could even be true of a photograph — is that the audience, the viewer, completes the image, and, in some sense, you do that in a film also. But certainly, in a painting, a painter isn’t always allowing you to know what his narrative is, but it’s an impressionistic feeling about the image, and he allows the viewer to complete that impression, those feelings, that’s involved. And so I think a painting is much more open-ended in its storytelling than a narrative in film.

Now, that isn’t to say there isn’t a school of filmmaking that’s experimental, let’s say, or open-ended, but I think that’s one reason why maybe Matty or I respond to the painting: we’re seeking the… the thing about images or photography, to me, it’s like music, in that it’s a non-verbal form of communication, and so we’re looking for a way to express ideas through images that are not necessarily literal.

Which goes back to semiotics.

Yeah. And I think there’s an element of that in Carol: that there are many images that create a feeling in a viewer of the subjectivity of the characters of Therese… “tur-ez”? I always say it wrong.

Yeah. There’s a line in the movie about the pronunciation.

Therese seeing Carol, and Carol seeing Therese. And the film was also dealing with, which is not overt, a class structure that’s different, the coming-of-age of Rooney’s character, discovering who she is and to embrace who she is as a woman, and also Carol’s making certain choices to give up the life, her relationship to her daughter, and give up something to have something else in her life. It’s about subjectivity, and I think subjectivity can have a certain kind of abstraction.

It’s things like the fog on the glass or the passing of the lights.

Yeah. That goes back to — which I didn’t mention — Saul Leiter, who was a painter, New York street photographer, and looked at images of more of an impressionistic feeling, these shards of emotion creating a certain feeling in the viewer without giving certain content. It’s more like an impressionistic feeling towards the image, and so we implement that through the camera — seeing them through glass, objects, reflections, the movement of the camera.

Carol is now available on Blu-ray and Digital HD.