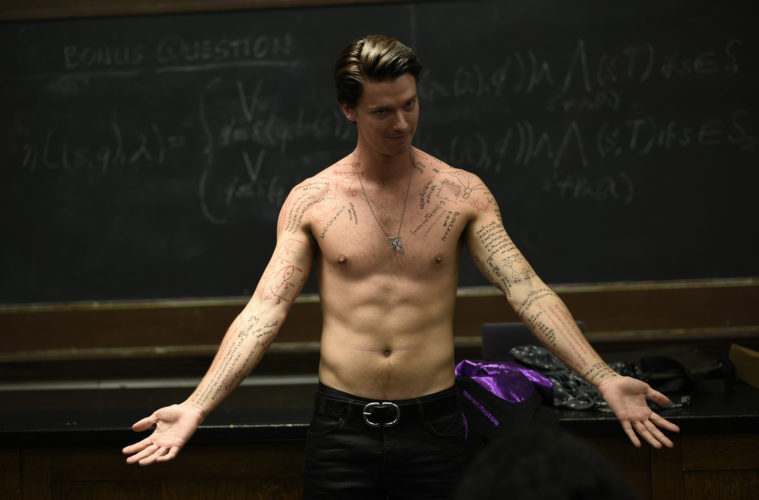 The title truly says it all: Daniel Isn’t Real. So when a little boy takes his stuffed animal down the street to escape his parents’ screams only to walk by a gruesome murder scene marked by a bloodied body lifeless on the ground, we understand the significance of his also finding a new friend. A young kid unable to process fear, rage, and death, Luke would naturally project his distressed mother’s (Mary Stuart Masterson’s Claire) visage upon the homicide victim now haunting his memory before creating a means with which to cope. So Daniel proves to be a security blanket—Luke’s escape from present trauma and future turmoil as his brain wonders whether the psychological issues his mom faces will soon become his burden as well.

As director Adam Egypt Mortimer and co-writer Brian DeLeeuw (based on his novel In This Way I Was Saved) continue the boy’s story, however, we begin seeing this imaginary outlet as something much more sinister. Fun and games with broomstick swords turn their focus away from responsibility and reality until Daniel realizes the only thing holding them back is the woman asking them to stop. So he puts the idea in Luke’s head that Claire would enjoy a bottle of pills in her morning smoothie—the fictional half of this team dictating that which his vessel does. Suddenly she sees the potential danger this manifestation has wrought, forcing her son to figuratively “lock” Daniel away in her dollhouse. And for years it worked. Claire became his protector instead.

The quickest road to relapse is separation and that’s exactly what Luke’s (Miles Robbins) college dorm supplies. Anxiety and panic rear their heads while his mother returns to her untreated schizophrenic ways alone at home. That old fear returns as he realizes Claire has again become a danger to herself. Whether the vision of that massacre flickers back into his subconscious or he simply can’t reconcile the knowledge that he can’t save her by himself, the dollhouse pulls Luke towards it. He must unlock that guardian angel to feed off its strength and courage in order to do what must be done. Maybe the near-tragic circumstances surrounding the poisoning of his mom were simply a result of youthful ignorance. Maybe that piece of his mind has matured too.

Daniel (Patrick Schwarzenegger) is exactly what Luke needs by exuding confidence and charisma for the latter to adopt and mimic en route to better grades, greater excitement, and increased sexual exploits. He knows how to get that which his counterpart craves, nudging his corporeal self to act on impulse rather than falter under uncertainty. Whereas Daniel derives pleasure from having two unsuspecting partners (Sasha Lane’s artist Cassie and Hannah Marks’ psychology major Sophie) at once, however, Luke can’t prevent his morality and empathy from giving pause. Instead of listening to everything the voice in his head says, he starts picking and choosing according to his ethical code. Angry at this unwanted willfulness, Daniel seeks to blur the line between consciousness and identity. Is he somehow “real” after all? That’s the crucial question. Sometimes Mortimer’s film depicts a young man’s descent into madness and other times it subverts that expectation to create room for the possibility that Daniel is more than a simple hallucination. The latter is visualized with varying degrees of psychological terror and cosmic horror as demons with clay faces introduce some seriously messed up nightmare fuel to drag Luke into a realm of pure unadulterated evil. The farther he falls, the more brazen Daniel becomes until it’s no longer possible to hide his presence beneath a façade of compassionate worry. This darkness that’s lie dormant for so long decides to make up for lost time via deception, aggression, and entitlement. Soon those Luke truly cares about are made into casualties of his hostile takeover.

I would have liked more from Lane’s Cassie because there’s a connection between her and Luke that deserves room beyond exploitation for the climax, but she is also a necessary addition insofar as how she provides Luke a safe place to embrace the good things Daniel teaches him while also ignoring the bad. Masterson’s Claire gets a bit lost in this way too—a loved one to trigger her son’s panic and set the stage for what we can expect from a genetic inheritance of disease. Daniel Isn’t Real therefore proves itself best when it solely concerns the dynamic between these two halves of one whole. The women in their life spark the conflict, but the men’s handling of it earns the bulk of our attention.

And this makes perfect sense since their duality is the point. It’s easy to succumb to the futility of the world in which we live today, so watching someone struggle to combat that inclination is powerful. Do we embrace the inherent nihilism that comes from witnessing how deplorable people wielding immorality often prosper or do we fight the good fight and stay true to what we are and want to continue being? Seeing how successful Daniel’s advances are at achieving his goals causes Luke to wonder if sacrificing his humanity is worth the cost. If his future consists of solitary torture like that endured by his mother, why would he subject himself and someone like Cassie to such an emotionally painful end? Daniel wins pleasure without the guilt.

Schwarzenegger is having a blast proving as much with smarmy smiles and giddy delight whenever his nefarious string tugs pull Luke down. The moments when his Daniel is asked to be formidably scary don’t work quite as well, but Mortimer thankfully has him reverting back to that comic impulse shortly after each. It’s the child-like spontaneity and empty psychopathy that keeps Luke happy and scared depending on how far their relationship has soured. And Robbins nicely shifts back and forth from infectious enthusiasm to crippling terror once he realizes every bad outcome falls upon his conscience. So while some amongst us numb themselves to the darkness of our times, others dare to remain optimistic. The sad truth, however, is that the sickness may already be terminal.