Archenemy Review: The Cost of Comic Book Heroics Gets Exposed 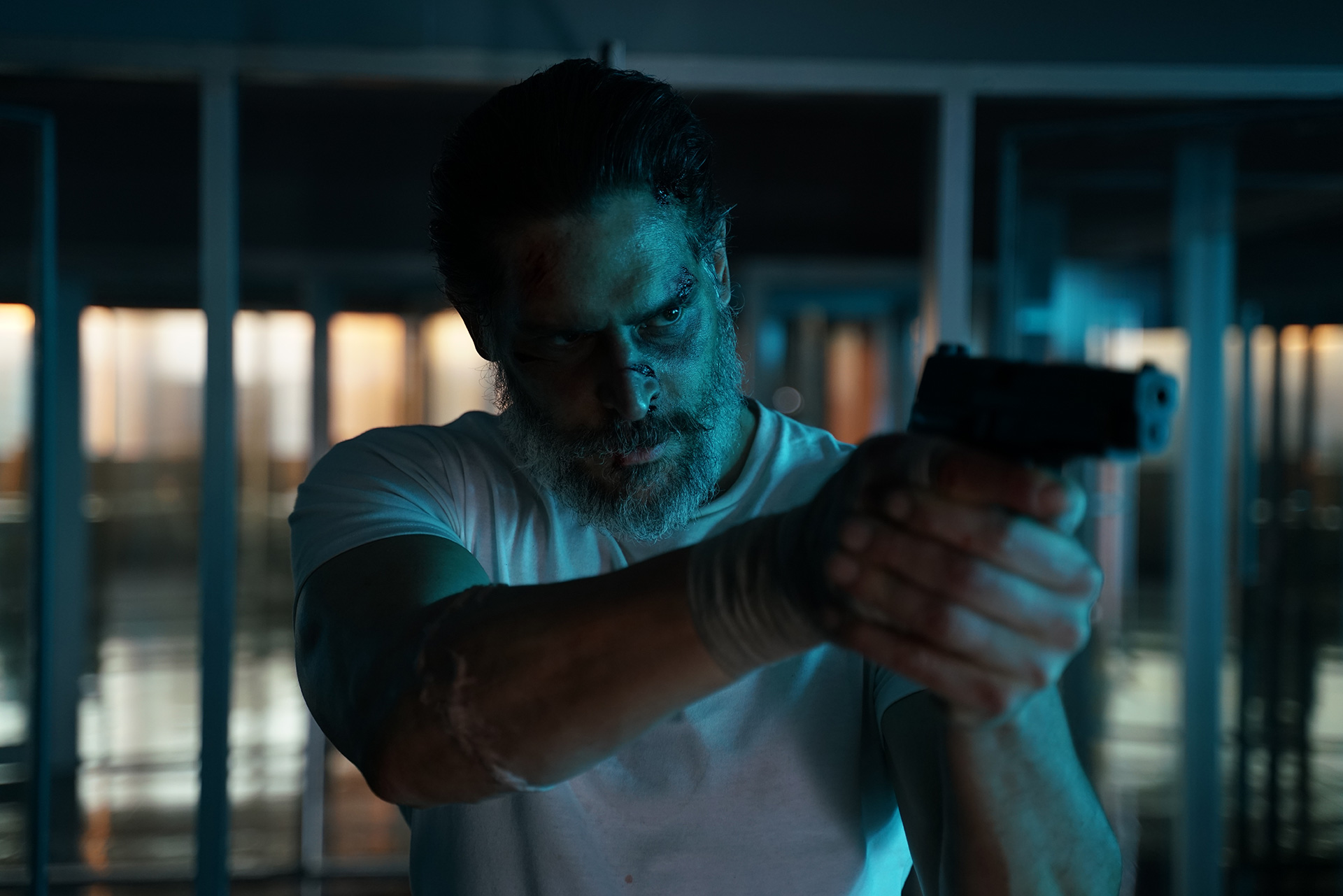 Give Max Fist (Joe Manganiello) a fifth of whiskey and he’ll tell you about the alternate dimension that holds his home city of Chromium. He was a hero there: indestructible, revered, and fearless when confronted by the evil Cleo (Amy Seimetz) and her apocalyptic weapons. It was her “void machine” that ultimately banished him to our version of Earth after he ripped a hole in space-time to detonate it between realities and save mankind. His “reward” was an eternity in purgatory unless he could grab ahold of another dimension and pull his way through. Doing so unfortunately meant the mystical blue blood that made him whole, super strong, and able to fly after losing his arm there no longer existed. Suddenly he was human again, lost and alone.

That’s where we meet Max at the start of Adam Egypt Mortimer’s Archenemy. His wild tale straight out of a comic book plays on-screen via an animated cut scene before we find him knocking back another shot at the bar. To look at him is to see a hulking, schizophrenic drunk with a temper who you should let stumble back under his bridge before he decides to hurt you for getting in the way. While a few people pity his plight and others buy him alcohol in order to laugh as he tells his story one more time, however, Hamster (Skylan Brooks) sees viral news potential. If he earns Max’s trust, he can hit record on his phone and upload every insane delusion to the internet for clicks.

Exploiting homeless men for Melissa’s (Jessica Allain) Trendable Media isn’t the worst way to make a couple bucks now that he and his sister Indigo (Zolee Griggs) are on their own. She’s working as a drug dealer for an erratic psychopath known as The Manager (Glenn Howerton) after all. It’s not her first choice for a career, but it’s lucrative enough to hopefully do their parents proud and send Hamster to college. So she cultivates a hard street persona, does his bidding, and waits for her opportunity to score big and get out. When an out-of-town customer arrives with a duffel bag of money and a few screws loose (Paul Scheer’s Krieg), she thinks the time has come. Instead she gets a bounty on hers and Hamster’s heads.

The days of punching walls to spark another rip through space-time are thus over the second Max gets wind that his new friend is in trouble. Will he be able to save Hamster and Indigo? Will he be able to adhere to his code of never killing when mortality often makes these types of confrontations “kill or be killed”? Or is it all an adrenaline fantasy that will inevitably make it so all three of them are dead and buried before morning? It all depends on how much Max believes in himself and how much Hamster and Indigo believe in him. That’s what superpowers are: displays of human strength overcoming long odds to save those in need. Maybe Max is a hero regardless of his demons.

He’s an intriguing character as a result because he’s constantly living with one foot in each of his competing realities. Max doesn’t tell his stories to brag or seem cool. He actually vehemently hates when people call him “super” because that’s not the point. When he talks, he does so with clarity and intelligence. String theory, quantum physics, and seemingly made-up words are bandied about with the utmost earnestness because nothing he says is a lie … even if everything he says is. The cracks that do ultimately show are the ones in the good guy façade he’s built once bodies start to drop. Because having fun with caped crusaders is one thing. Seeing the gruesome carnage in their wake is another. Hamster didn’t sign-up for that nightmare.

What’s really great about Archenemy is that Mortimer never shies away from that darkness. By toeing the line of mental illness, he can expose the cost of comic book heroics and the evil being fought against. So while The Manager is cartoonish to a point (think Howerton’s It’s Always Sunny in Philadelphia persona, but with the relish to unleash his depravity without a conscience keeping him afloat), his reach and danger aren’t. We can laugh with Hamster when Max goes up against an idiot in a muscle car while also stopping in our tracks the second he crosses from farcical insanity into horror. Even though Max is operating on the need to clean up Indigo’s mess, it doesn’t give him a pass. Monstrous acts create monsters.

It’s a fascinating psychological entry point into this subject matter that allows the gritty cesspool aesthetic to co-exist with the over-the-top humor of outlandish characters like Joseph D. Reitman’s Finn—a peripheral crony afforded a lot more personality than the usual throwaway goon via the way he talks and the book he carries. Little things like that are where the script excels and the color they provide keeps us invested even as the bigger narrative progressions end up being convenient in ways that make the whole frustratingly silly. It’s one thing to have a couple threads connect in unforeseen ways, but everything? Destiny has a lot of pull in comic books when prophecies prepare us for it. Random eleventh hour revelations serving the plot feel disingenuous.

Mortimer is gearing up for a final confrontation between Max and The Manager’s unseen boss. He’s tying strings together in ways that get us to said climax on the fastest route possible while minimizing his superfluous character count. It makes sense intellectually, but the conclusion becomes somewhat inert when those strings are twisted in lieu of a layered weave. Mortimer compensates by highlighting the delusional fallacy some hide behind to excuse the pain they inflict by overinflating the value of the protection they provide. As Hamster’s reaction to death shows, however, heroes have the same capacity to make us afraid as their nemeses. Manganiello embraces that complexity and willingly admits through his performance that redemption isn’t guaranteed. Power can still corrupt our best intentions. Fantasy can’t erase truth.

Archenemy opens in limited theaters and via VOD/Digital HD on December 11.