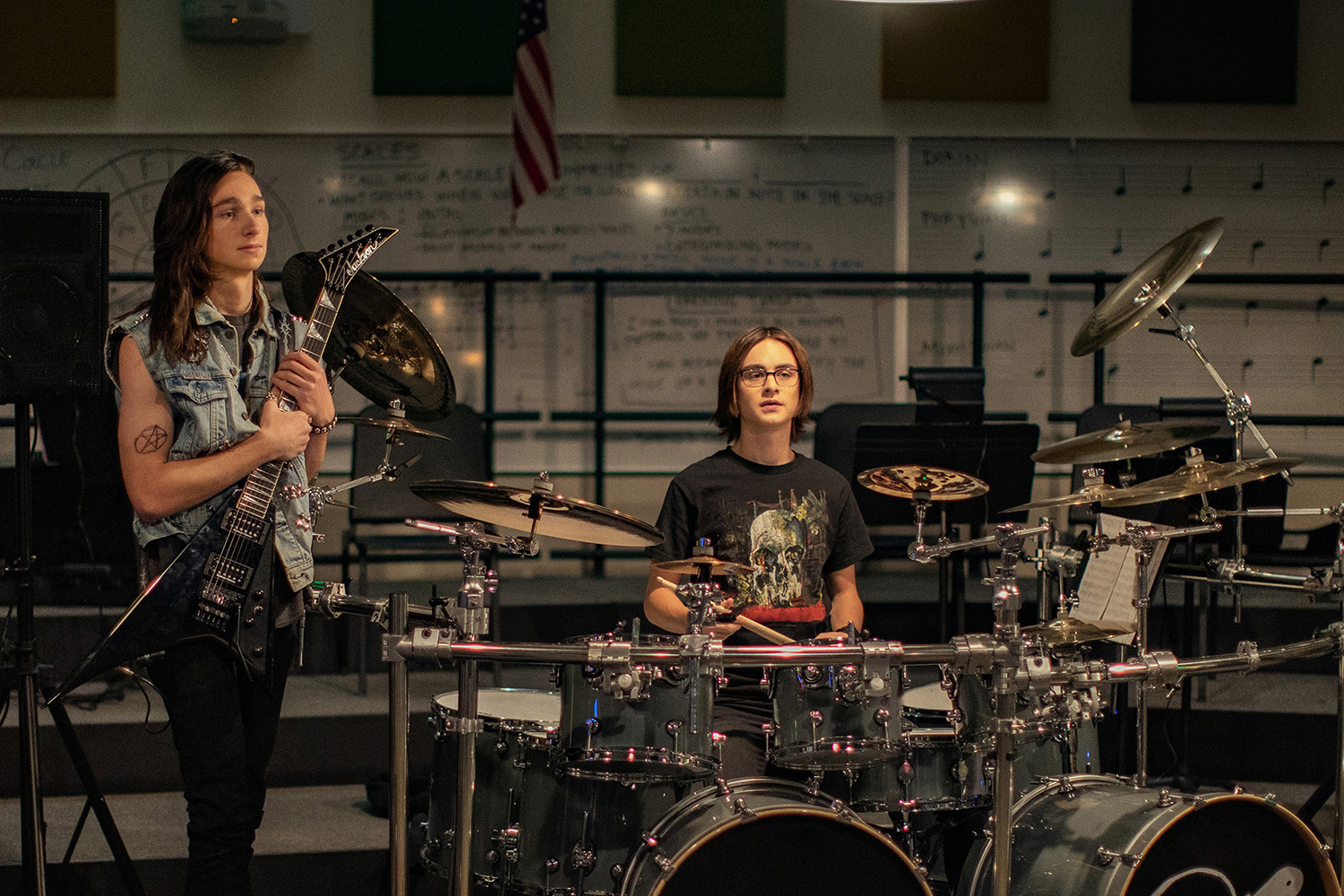 There hasn’t been a “battle of the bands” since an unfortunate scrotal incident scarred many a teen not expecting nudity a few years back, but the mere mention of the possibility Dean Swanson (Sufe Bradshaw) decided to give her students another shot has Hunter Sylvester (Adrian Greensmith) salivating. The problem: he doesn’t have a band. Wanting one and having one are two different things and Dad’s (Brett Gelman) money (stolen, of course) can only get Hunter so far before a reality check proves necessary. That’s the one thing he refuses to accept, though. His love for metal and unyielding determination given as a sacrifice to the genre’s Satanic gods must manifest success into existence no matter how many enemies are made in the process.

The question, then, is whether best friend and reluctant drummer Kevin Schlieb (Jaeden Martell) ends up one of those numerous foes. If he’d do anything for the guy who saved him from a bully when they were younger, Kevin still doesn’t know Pantera from Iron Maiden and, like a running joke that appears again later, confuses metal with the hair bands from Rock of Ages. Hunter puts together a quick syllabus of songs that should set the novice on the right path. YouTube, a glossed-over natural ability to learn technical metal drumming by ear (despite joining the marching band so he could get out of gym class), and a $7,000 double-bass kit charged on the sly quickly transform Kevin from drummer boy to undeniable rock music God.

Director Peter Sollett is used to telling stories starring a younger generation (the brilliant Raising Victor Vargas and highly entertaining Nick and Norah’s Infinite Playlist)—he knows that Kevin can’t simply become Prom King overnight. One of the best parts of his latest endeavor Metal Lords is the more believable transition from nobody to “that guy” instead. Because D.B. Weiss (who writes the script) isn’t Lorene Scafaria (who adapted Nick and Norah’s), that positive isn’t, unfortunately, also without its fair share of struggles too. Whether the desire to use virtue signaling as humor by shoehorning in obvious offensiveness just to have another character call it out or the reductive depiction of mental instability as cheap Tourette’s tricks, I winced more than expected.

Strip all that away, however, and there’s something here to enjoy simply through its platform of spotlighting outsiders (Hunter’s angry child of a broken marriage, Kevin’s shy dweeb, and Isis Hainsworth’s volatile Brit Emily) wading through the tumultuous waters of adolescence. This band becomes an outlet that not only allows them to channel their frustrations, but also provide the potential of turning heads both in manners healthy (getting people to know they’re more than their appearances) and not (creating a sense of superiority that may just exacerbate the problems they already face). Kevin enjoys the former because the music helps push him outside his comfort zone. Hunter falls prey to the latter, pointing his fears and insecurities at his BFF in ways that render him a bully.

Lessons will be learned. Hunter will have to implode in order to see past his own aggressive ego and Kevin will have to find the courage to walk away from the only friend he’s ever known in order to begin building an identity for himself. Metal becomes the catalyst. It gives Kevin a purpose and a goal to strive towards, even if it wasn’t his passion at the start. It also opens the door to Emily as a partner (if Hunter gets out of his own way to realize a “cello-playing girl” might be exactly what they need) and love interest (if a fleeting flirtation with Analesa Fisher’s Kendall doesn’t ruin things). But road won’t be easy with a surplus of self-loathing between them all.

All the usual coming-of-age tropes are present and the tone feels more PG-13-playing-R than the debauched assuredness of Nick and Norah’s PG-13, but not all is lost thanks to affecting performances and great soundtrack (although, as I’ve seen metal fans comment, my enjoyment of what was picked and the new song “Machinery of Torment” spearheaded by Tom Morello may just prove how I don’t actually know anything about metal). Greensmith may have the most to do considering his placement as bandleader, victim, and creator of his own demise, but Martell and Hainsworth may be the most effective because of them needing compassion and understanding to deal with Hunter and move past the hurt he inevitably causes. Their relationship is also very sweet. We hope love prevails.

Morello and a trio of metal legends arrive to ensure it does, along with a brief but entertaining supporting role from Joe Manganiello. I won’t ruin his role despite it being obvious as far as sage advice from “someone who knows” goes in these films. While that familiarity may render any surprises moot, it does also supply a sense of calm that allows audiences to simply vibe with the atmosphere and let the narrative unfold. We’re here to see how the characters grow individually and together, not a generic plot progress as it has for decades. It’s not laugh-out-loud funny, but I was smiling for the duration, and its subversions of certain archetypes (see Noah Urrea’s Clay) kept things marginally fresh. Good and bad, it met expectations.