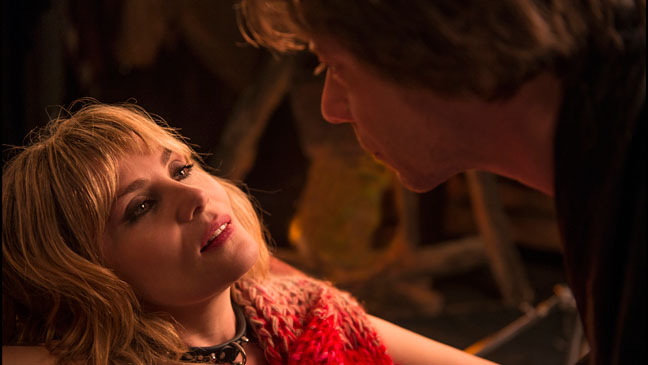 Even in an advanced age and with a slightly reduced rate of output, Roman Polanski is still considered one of the most influential filmmakers alive and operating. His previous film, Carnage, was adapted from a piece of theater by scribe Yasmina Reza and is constrained to a single interior location; following suit with similar meta-theatrics, Venus in Fur is the second adapted play for Polanski, this time taking from playwright David Ives‘ tale about an actress auditioning for a dominatrix-inspired role. Turning this into what could have easily been titled Fifty Shades of Polanski, he examines the roles of sexuality between a man and a woman.

Opening with an ominous tracking shot in a desolate street in Paris, with rain crashing down over the sounds of thunder, the camera settles on a dilapidated theater before flying inside the entrance. When the doors open, a drenched actress, Vanda (Polanski’s real-life wife, Emmanuelle Seigner), appears before a neurotic director, Thomas (Mathieu Amalric), who has been auditioning potential prospects all day long. Thomas is initially disgusted by Vanda’s vulgarity and insistence in pleading over her being a perfect fit, but he soon becomes enamored with her sly charm — she has obviously prepared extensively for this role, bringing in a series of props that impress Thomas’ sensibilities. This tit-for-tat is the crux of the entire film, as Vanda slyly coerces Thomas into enveloping the role of the character, while Polanski toys with the unwitting audience and the paradox of the theatrics: an audition within a play within a film. Polanski is also concerned with an exploration of motivations and desires which drive men to sadomasochism, most peculiarly how those roles are mirrored in the director’s chair. Equally compelling is how Vanda subverts this position of power and perversion, gradually starting to dominate the director, who becomes obsessed with her sexual prowess over his conscious. Meaty in word play, there is a lot to chew on here for fans of the more theatrical fare, while those looking for a relatively traditional movie experience might be turned off by the static form of presentation. Both performances are commendable, with Amalric feeling like a Polanski foil similar to how Woody Allen uses his protagonists to represent a part of himself; it doesn’t hurt that he’s the director’s doppelgänger if ever there was one

Yet, despite all these elements that lend themselves to a provoking experience, Venus has a hard time escaping its own nature. Granted, it’s a daunting challenge to confine the film to one claustrophobic environment with only two characters and keep one’s audience engaged. Polanski, for the most part, is able to keep things moving, readily utilizing Seigner’s exuberant sexuality to captivate, while Alexandre Desplat‘s playful score punctuates over-the-top moments. There is no denying that he remains an accomplished director with an understanding of the importance of theatrics — and Venus in Fur is another example of that, but it might be time for the director to go back outside and make a film with more vibrancy.