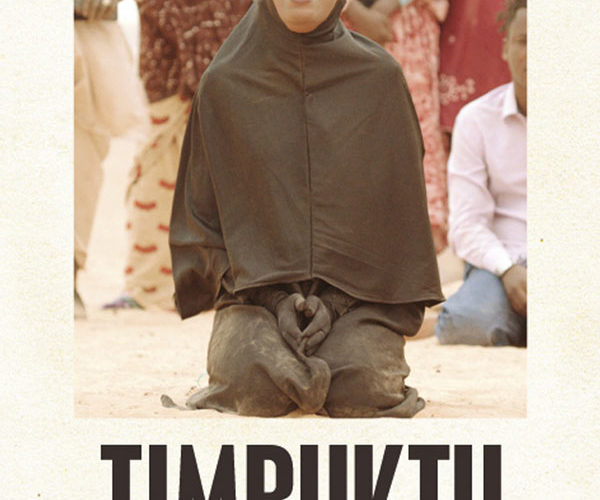 Abderrahmane Sissako can no longer be called one of the greatest African directors of our time; he has become, simply, one of the greatest directors of our time. With his fifth feature, Timbuktu, Sissako fuses the poetic visual language of Waiting for Happiness with the political urgency of Bamako to bring about a revelatory work, something along the lines of a Howard Hawks jihadi-hangout movie. I mean that as a very good thing. Bamako traversed into extremely didactic territory by taking on the World Bank and the G8, so while a critique of Jihadism and Islamism is easier to stomach, it is Sissako’s aesthetic shift that transcends this work. Instead of the documentary style from his previous outing, he resorts to something akin to slow cinema, letting the images and paradoxes speak for themselves. And there are many paradoxes for the small town of Timbuktu, where a group of jihadis invade and pose a whole new set of laws for its citizens.

It would be easy for Sissako to simply display the horrors of jihadisim, but the director instead searches for peculiarities in the actual pragmatics of how they work and, often, the failures of sharia. In one scene, two soldiers confront a local fish seller for not wearing gloves, but the woman demands that these soldiers explain how she can clean fish while wearing them. Sissako characterizes each of the jihadis as much as the people they torture, creating something of an, again, Hawksian rhythm within the group dynamic. The most notable, the head soldier Abdelkrim (Abel Jafri), attempts to learn to drive the group’s Toyota truck, but does so worse than most teenagers. This is just one of many darkly funny moments that Sissako brings to Timbuktu, at a moment like this questioning the logic of when laws must be bended; a particularly biting one occurs when a soldier asks his leader if he must arrest a group for playing music if the lyrics are praising Allah.

These vignettes serve as greater metaphors for the entire system than the film’s central narrative, which concerns a couple on the outskirts and a murder that brings them under the power of the jihadis. Although that sequence takes on a bracing final image, the narrative beats that lead up to it are the only few that feel forced within the meandering camera eye. Sissako’s best bits have always combined the poetic, the comic, and the political, such as the lightbulb through the desert in Waiting for Happiness or the fan in Bamako. He finds a clear one here in the soccer ball: after a man is sentenced to lashes for playing with a football (even though the soldiers entertain their own Zidane vs. Messi debates), Sissako cuts to a long sequence of a group of footballers playing with an absent ball as the camera follows the movements à la Blow-Up. Where Antonioni questioned reality, the scene finds poetic resonance as political humor. Sissako, however, doesn’t hide from the horrors, evoking great tragedy through a number of sequences. But the approach never comes off with the same “atrocity porn” that plagued something such as 12 Years A Slave. Most notable is the stoning of a couple (an actual event that served as the film’s inspiration) which begins before cutting to a rhythmic dance, each stone matching the beat. Sissako constantly finds a sort of aesthetic pleasure in the atrocities — bubbles slowly rising up from a river in one scene makes for a truly chilling moment — in addition to his comic resistance pieces. And as shot by Blue Is the Warmest Color director of photography Sofian El Fani, these images are often luscious, using the setting sun and the night sky to soak in the beauty.

This is not to say Timbuktu is simply searching for poetry — there is a critique here, and it is the failure of jidhadism as a cultural translator. This comes in literal form, as numerous scenes feature the jihadis having to work through translators to make their demands. (The film makes use of four languages: Arabic, Tamasheq, English, and French.) A marriage proposal is denied outright, only to be done in secret, with the blatant offense justified by an ambiguous verse from the Qu’ran. Numerous sequences feature characters simply trying to explain their point of view to one another, but the sides clearly aren’t listening. When one man confesses his deepest and most personal want to the jihadi leader, the leader asks his translator to stop. He knows that in order to continue his fight, he cannot listen. These jihadis only see prey.