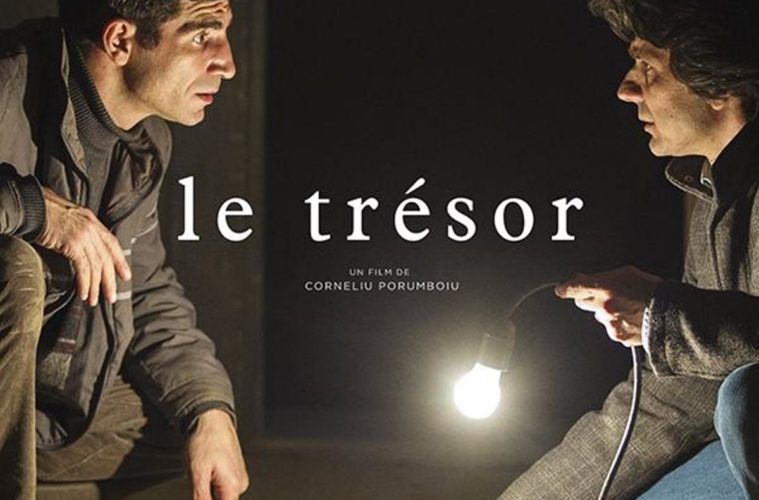 Though regularly grouped with the directors that comprise the Romanian New Wave, Corneliu Porumboiu’s brand of social realism is all his own. Dispensing with the shaky cam so popular amongst his peers, his fictional features capture the world through contemplative long takes, their duration and frequent immobility allowing for careful observations of the subjects’ relationship to their environment, which is always reflective of wider-reaching concerns. The Treasure, his fifth feature and the winner of this year’s Un Certain Talent Prize, is the latest gem in the director’s exquisite filmography — another tightly focused, minimalist and enchantingly humane story of individual struggle within the broader social reality of contemporary Romania.

Costi (Toma Cuzin), the film’s protagonist, is one evening approached by his neighbor, Adrian (Adrian Purcarescu), who tells him that his great-grandfather had buried a treasure in their garden in 1947 before their family was deported by the Communists. Both men are struggling financially and Adrian offers Costi a deal: if he pays for the cost of hiring a metal detector and helps him dig up the treasure, they will split what they find. Once the metal detector has been procured, they drive out to Adrian’s family’s house in the countryside with the detector’s operator, Cornel (Corneliu Cozmei), and spend the night digging a huge hole. That’s pretty much the extent of the narrative, and the bulk of The Treasure is dedicated to the men’s scanning and digging-up of the garden. What’s extraordinary is how delightful a story Porumboiu can draw out of such minimal means. A large part of the credit goes to the director’s characteristic droll humor, which could be described as a more realistic version of Aki Kaurismäki’s – the jokes are so subtle and sneakily deployed that the laughter catches you by surprise every time. The idea of two grown men seeking treasure is played completely straight, though the responses they get from others are priceless — particularly Costi’s boss, who assumes this is a ridiculous excuse that Costi’s invented to cover up an extramarital affair. Cornel’s ineptness with the metal detector is the most extended and possibly funniest gag in the film, and Porumboiu somehow manages to play it as both deadpan and slapstick.

Despite the absurdity of this premise, The Treasure is actually based on events that happened to Porumboiu and Purcarescu, who is himself a director. Much like in the film, the latter told Porumboiu about a family treasure, which they went out to find with the intention of shooting a documentary. When their quest proved fruitless, Porumboiu turned the whole experience into a fictional feature. Cozmei was the person they’d hired to operate the metal detector in real life, and his incompetence had been so hopeless and comical that he was asked to play himself. The script is peppered with references to Romania’s past, including World War II, Communism, and the revolution that overthrew Nicolae Ceaușescu in 1989. These, together with the fact that they’re seeking to unearth a treasure whose history stretches back over three generations in Adrian’s family, endow the men’s digging with an understated allegorical dimension. It would be unfair to reveal the outcome of their undertaking, so let’s just say that, on a symbolic level, the implications of the search are brought into a perspective that’s turned towards the future.

As with Porumboiu’s previous features, The Treasure is dominated by long takes with a movement that’s rare and limited to unassuming pans. In its conclusion, the film gradually sheds realism and begins taking on the air of a fable (significantly, Costi reads Robin Hood to his son in an early scene). For its closing image, the camera is taken off a tripod for the first time and soars upwards in a wondrous crane shot. Simultaneously, the film’s only instance of soundtrack music is played, kicking off a song so unexpected, yet so perfect, that it ends things on a heartfelt and fantastical note. Within Porumboiu’s formal restraint, these conspicuous devices have an impact so affective that it makes one almost wish directors’ use of showy techniques were regulated by strict quotas so that they can always retain such power.

The Treasure premiered at Cannes and opens on January 8th. See our coverage below.