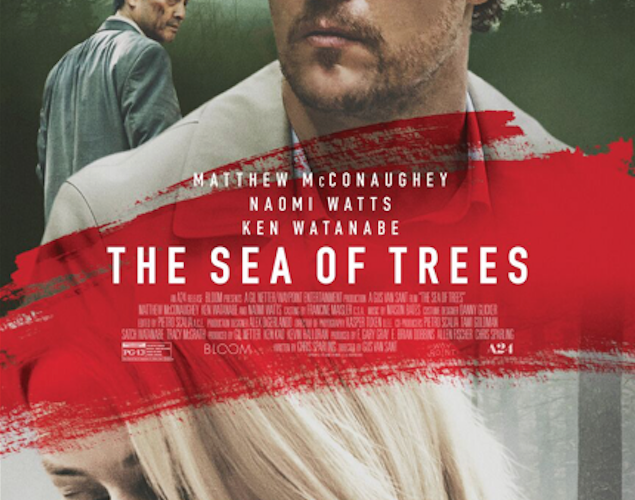 [Cannes Review] The Sea of Trees

In the largely wordless opening of Gus Van Sant’s The Sea of Trees, a man (Matthew McConaughey) drives to the airport and leaves his car in the parking lot with the key still in the ignition. He walks up to one of the desks and absently buys a ticket to Japan, hardly registering what is said to him. Once there, he rides a bus to a forest and follows the trail inwards, passing, in succession: signs bearing puzzling mottoes (“Don’t suffer alone. / You have one life, take care of it.”), an abandoned pair of shoes, the decomposing body of a woman. It isn’t entirely clear whether we’re witnessing reality or a dream. Once he sits down and pulls out a letter and a bottle of pills, his intentions become clear. Then a Japanese man (Ken Watanabe) with slit wrists appears and the American puts his plan on hold. In a gorgeously ethereal shot, the two men are framed walking in the same direction at a distance from one another, the perfect yet uncontrived synchronicity of their uncertain gaits establishing a parallel between them that suggests the commencement of a shared trial.

The genuinely captivating ambiguity of these early moments fools you into thinking The Sea of Trees could be a return to form for Van Sant, a tantalizing throwback to the days when a new release by the director was greeted with deserved anticipation. The rest of the film obliterates this promise and punishes you for being so gullible.

With 2002’s Gerry, Van Sant already made a film about two men stranded in nature that used their mounting struggle for survival as a means of exploring existential themes. That film’s minimalism put a lot of trust in the power of images to speak without dialogue and equal trust in the audience’s ability to assimilate their import. Van Sant must have suffered a devastating disillusionment in the intervening thirteen years, as The Sea of Trees feels compelled to spoon-feed every single aspect of its painfully banal story.

In the first of a long series of flashbacks, Arthur (McConaughey’s character) and his wife Joan (Naomi Watts) go out for dinner with friends. In the middle of their meal, a tipsy Joan brusquely kills the atmosphere by reproaching Arthur, a college professor, for “pretending to be an intellectual” and relegating to her the role of breadwinner. That’s all that would have been necessary to set up this most familiar of scenarios. Instead, several more flashbacks are dedicated to its reiteration as the couple engages in dragged out and terribly scripted arguments, shouting platitudes at one another without granting deeper insight into their marital crisis.

Then, in the heart-to-hearts between the two men in the forest, Arthur relates the contents of the flashbacks back to his companion, escalating the redundant repetition to an excruciating degree (it’s difficult to keep track of the number of times he says, “I can’t live without her!”). In trying to compensate for the narrative’s lack of substance, Van Sant embroiders the flashbacks with mawkish abandon, building up to a conclusion of sham spirituality that is so artificial and undeserved, it would feel like an insult to the viewer’s intelligence if it weren’t so profoundly embarrassing for those who made the film.

The Aokigahara forest, also called the Sea of Trees in Japanese, is a large and spectacular forest at the foot of Mount Fuji, said to be haunted by the spirits of the thousands of people who have committed suicide there over the years. The mind boggles at the thought of the filmic possibilities offered by such a location, and it despairs at the gradual realization that the sole reason this film is set there is to literalize the idiom “not seeing the forest for the trees.”

The Sea of Trees premiered at Cannes Film Festival and will be released by A24 on August 26. See our complete coverage below.