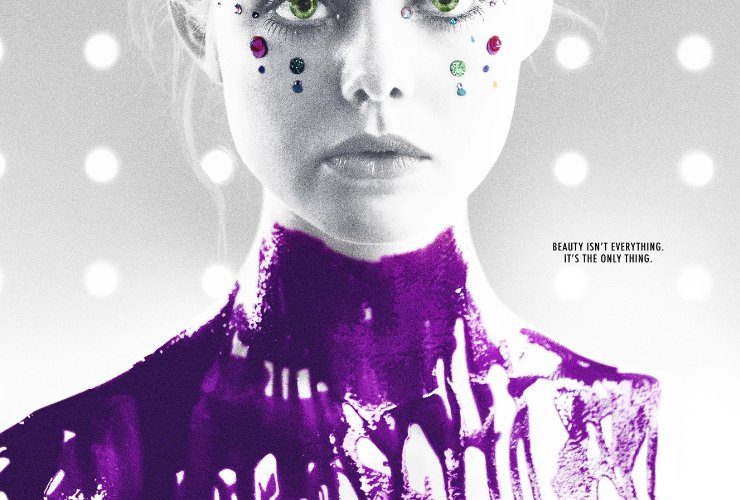 The problem in trying to critically assess Nicolas Winding Refn’s putrid atrocity of a film The Neon Demon is that regardless how much outrage is thrown at it, Winding Refn invariably wins, since that’s exactly what he’s after. The director has set out to make the most repellently misogynistic film imaginable, yet he’s disguised it as a postmodern feminist satire. By shattering every possible taboo, the film is supposed to be an attack against the very thing it represents. Really, though, any semblance of commentary is simply a posture for Winding Refn to cover his ass. This isn’t a case of épater les bourgeois, nor is The Neon Demon qualitatively comparable to the works of Paul Verhoeven or Harmony Korine – it’s much, much too stupid for that.

Set in Los Angeles, that signifier city for all things superficial, The Neon Demon aspires to be a sort of Faustian tale of the fashion world. 16-year-old Jesse (Elle Fanning) is the new girl in town, fresh from Georgia and dreaming to make it as a model. As everyone repeats ad nauseam, she’s incredibly beautiful. More importantly, hers is a natural beauty, unlike the plastically enhanced perfection of her peers who reel with murderous envy as she threatens to steal their spotlight.

After being ushered into the fashion industry by the Mephistophelian make-up artist Ruby (Jena Malone), Jesse seals her fate through the first catwalk show. As she steps onto the runway, her damnation contract appears in the form of four floating neon triangles linked together to form one bigger triangle. In the last few years, triangles have emerged as meaningless symbols of hipster cool, so it follows that four of them will quadruple the cool factor. (The Sierpinski triangle would seem to offer infinite potential for coolness, but Winding Refn shows some uncharacteristic restraint in this case.)

From the get-go, The Neon Demon pushes objectification to new extremes, presenting every female character – except maybe Ruby – as a sentient mannequin. Once Jesse sells her soul about two-thirds of the way in, however, that’s when Winding Refn really starts getting his rocks off. (Spoiler-averse readers wishing to relish the full impact of this film’s invention will want to skip ahead to the next paragraph.) Highlights include various types of rape, the most creative of which involves the coerced blow job of a knife; a sequence in which Ruby lies in child-giving position and the camera slowly tracks towards her loins as they expel a torrent of blood à la The Shining’s elevators; and another that intercuts between Jesse masturbating and Ruby molesting a model’s naked corpse.

Yet, for all his zeal to offend, Winding Refn is nonetheless a circumspect provocateur. In addition to having a primarily female cast, The Neon Demon also has a female DP (Natasha Braier), and while the director retains sole story credit, he made sure to co-write his script with two women, Mary Laws and Polly Stenham. Just to be really safe, the final pre-credits image features a caption dedicating the film to his wife, the actress and filmmaker Liv Corfixen.

All these precautions notwithstanding, there is one crucial element that actually could have exonerated the film but is nowhere to be found: irony. Prior to its premiere, The Neon Demon was described as a take on the giallo, the trashily ultraviolent horror genre once practiced by the likes of Dario Argento and Mario Bava. Misogyny was, of course, a central aspect of most giallos, but Italy at the time – the 1960s through to the 1990s – was not exactly a bastion of any type of equality. Using genre as a justification would be like making a virulently racist film and excusing it as a remake of The Birth of a Nation. In any case, Winding Refn appropriated the gore and revolting sexual politics but left out all of the fun. Apart from a few exaggeratedly stilted lines, most of them courtesy of a woefully miscast Keanu Reeves as a motel-owner-cum-teenage-prostitute-procurer, The Neon Demon is a rigorously unsmiling and self-important film.

Rather than the cheap kitsch of giallo, The Neon Demon‘s aesthetics – all glossy, clinically polished images and deep, starkly contrasted neon colors – seem drawn from the films of Matthew Barney and Gaspar Noé, arch-provocateurs hardly known for their nuance who are nevertheless made to look like Ozu and Bresson when juxtaposed with Winding Refn. The Neon Demon ostensibly puts forward a censure of contemporary society’s superficial beauty standards as propagated by the media, and yet any still from the film would be right at home in the pages of Vogue — perhaps the film does contain some irony after all. Everything is pure surface and, while reliably excellent, Cliff Martinez’s throbbing electronic score doesn’t achieve much by way of compensation.

The most glaring proof of The Neon Demon’s failure is how stultifying it is. Although Only God Forgives’ risible attempt at elevating its sordid narrative through Freudian concepts already demonstrated Winding Refn’s severe intellectual limitations as an artist, Drive did amply prove his potential directorial prowess. The perfectly executed set-pieces that rendered that film such an exhilarating ride are sorely missing here. Instead, The Neon Demon consists of scenes involving minimal camera movement and impassive characters drifting through immaculate compositions that lose all their appeal within the first ten minutes. Thereafter, the viewer is left to stare at a ponderous and incoherently stitched-together succession of vapid images for what feels like an eternity until the carnage starts.

The Neon Demon premiered at the Cannes Film Festival and will be released by Amazon Studios on June 24. See our coverage below.