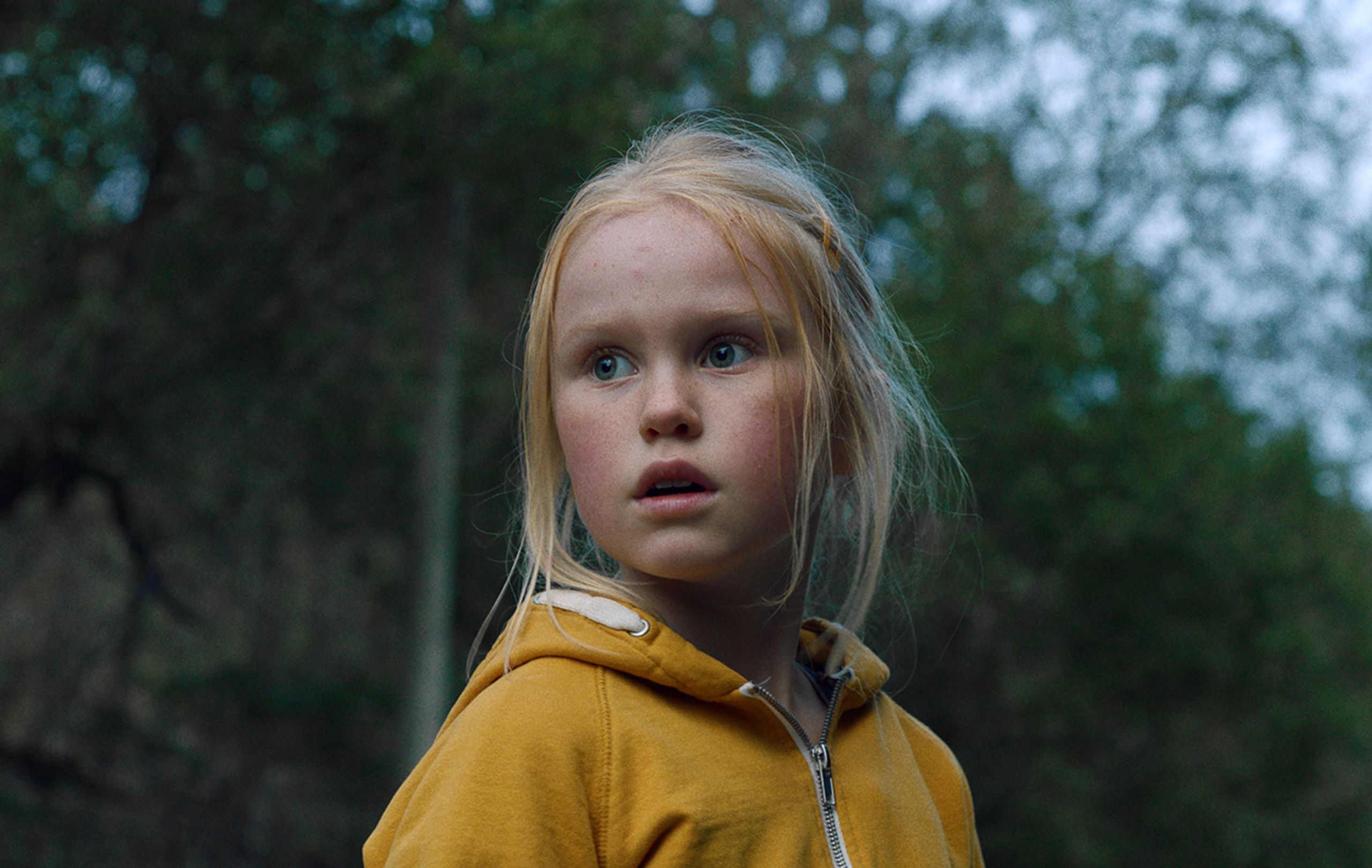 The Innocents, the assured sophomore feature from Eskil Vogt, is a prickly film about childhood morality designed to get under its audience’s skin. It quickly becomes apparent that the remaining unease has very little to do with the lingering effects of slow-burning horror, and much more with problematic casting choices that render the drama uncomfortable. It’s a shame as this is a confident effort, utilizing many of the same vague supernatural aspects as 2017’s Thelma (for which Vogt co-wrote the screenplay with frequent collaborator Joachim Trier) to tell a completely different coming-of-age story. It makes for an unsettling, more overtly horrifying companion piece, but one with too many noticeable flaws to properly escape from its shadow.

Set almost entirely in a Norwegian apartment complex comprising looming industrial blocks, scenic gardens, and forests, Vogt’s drama follows Ida (Rakel Lenora Fløttum), who has moved to the area with her parents and autistic older sister Anna (Alva Brynsmo Ramstad). She very quickly meets Ben (Sam Ashraf), who immediately shows off his telekinetic abilities—all initially small-scale, bending and flinging bottle caps with his mind. Assuming she boasts similar powers, as she can bend her elbows backwards, Ida and Ben set off to test their limits, throwing cats down the stairs to see if they’ll survive the fall and heading back to the woods to knock down tree branches.

The pair initially seem malevolent, bearing a childlike fascination to explore their abilities with no regards for consequences. Even before meeting Ben, Ida regularly inflicts pain upon her nonverbal older sibling (such as putting shards of glass in her shoes) as part of a larger resentment that she doesn’t get enough attention. The arrival of Aisha (Mina Yasmin Bremseth Asheim), a girl who can seemingly hear Anna’s thoughts, complicates this dynamic. Suddenly Anna is able to speak, while Ben discovers an ability to manipulate others in increasingly violent manners, putting the rest of the friendship group and their oblivious families at risk.

The Innocents is unnerving from its opening moments, depicting the casual cruelty of his protagonist with a detachment akin to Michael Haneke, cinema’s foremost chronicler of youthful malevolence. Even as its central story becomes a clearer allegory for the development of moral consciousness, the shocks remain effectively simple; the bullying Ben receives from the other children cause him to utilize his powers to manipulate those around him in more vengeful ways. Whenever a stranger is so much as glanced onscreen, there’s a significant psychological threat. The telekinetic powers never get more heightened than this most simple of concepts—Akira this is most certainly not. And it works in the film’s favor. The simplicity of who and what can be manipulated allows for the surrounding morality play to become more complex without becoming intangible in its lore, the sparse use of visual effects ensuring the more ambiguous character drama never becomes overwhelmed with fantastical elements.

The Innocents is at its best when it couples these psychological shocks with an innate childlike curiosity. Ida is too young to fully understand the consequences of her actions, and to not realize that powers that would otherwise secure you a place in Charles Xavier’s School for Gifted Youngsters aren’t the norm. Viewing all from the perspective of the child who doesn’t have supernatural abilities is a unique framing, this detachment helping heighten the tension whenever Ben uses his powers for unsavory means. We never fully understand how the other children control their abilities, sharing only the inquisitive nature and eventually the creeping fear of our protagonist. We never view this drama from a parental perspective either—to the wider world, all that can be seen is children spending their summer days playing out. A third-act sequence set in a busy playground all but reaffirms this.

The problem with The Innocents is that its strengths as a psychological horror are hard to separate from the director’s misguided approach to casting. The young white protagonist has something approaching a moral redemption arc after being introduced abusing her disabled sister, her happy family still intact at the end of the drama. This contrasts sharply with Ben, a young child of color who is quickly made to be the antagonist—similarly to Aisha, the other central POC character, both live in single-parent households contrary to the happy white family at The Innocents‘ core. If Vogt intended to make any cultural commentary here, it gets lost in translation. Instead, it feels dispiriting that a presumably widespread, inclusive casting process served only to reimagine these characters within the lines of borderline racist horror tropes, either vengeful or among the earliest victims of violence. This doesn’t seem like it was the director’s intention, but the unconscious bias in how these roles were cast proves hard to overlook.

In the moment, The Innocents proves effective as a psychological horror, yet afterward it becomes unnerving in a way that has nothing to do with the supernatural chills within. It’s undeniably well-executed as an arthouse genre piece, but not without leaving a considerable sour taste afterwards.

The Innocents premiered at the Cannes Film Festival.