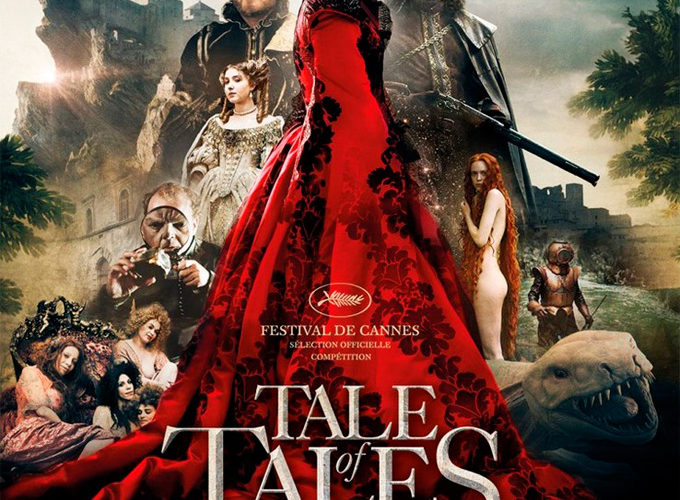 Tale of Tales, Matteo Garrone’s first English-language film as well as his first featuring an international cast, is an adaptation of three of the 50 fairy tales that make up Giambattista Basile’s Pentamerone, aka The Tale of Tales, or Entertainment for Little Ones (though this last part of the original’s title must have escaped Garrone). The Pentamerone was the original source for many of the Brothers Grimm’s most famous fairy tales, such as Sleeping Beauty, Cinderella and Hansel and Gretel. Unsurprisingly, for his film Garrone chose three of the more obscure entries in Basile’s 17th-century collection.

The three tales are told simultaneously and the film fluidly moves from one to the next at roughly regular intervals. In the first, a necromancer advises the Queen of Longtrellis (Salma Hayek) to eat the heart of a sea monster in order to bear child despite her infertility. Though the prophecy holds true, the servant who cooks the heart is also impregnated and both women give birth to identical boys (real-life twins Christian and Jonah Lees) who grow up to be intimate friends, rousing the queen’s increasingly violent chagrin. The second tale features Vincent Cassel as the libertine King of Strongcliff who is seduced by the beautiful singing voice of a repulsively hideous old woman (Shirley Henderson), whom he orders defenestrated after she tricks him into bed with her. In the last tale, the King of Highhills (Toby Jones) nurtures a flea into a bear-sized monster. After it dies, he promises his daughter’s hand to the first man who can guess to what animal its gigantic hide belongs, thus inadvertently betrothing his daughter (Bebe Cave) to a terrifying ogre.

This all sounds more entertaining than it actually plays on screen. As Pasolini amply demonstrated with his Trilogy of Life, also based on classic fable anthologies (which preceded and influenced the Pentamerone), the grotesque style of such tales demands a healthy dose of irony to work on film. When Garrone allows for such irony, Tale of Tales shines. The shot of Hayek in an opulent and pristinely white dining room digging her face into a massive bloody heart is delightful, as is the sight of Jones lovingly feeding and embracing the Cronenbergian flea. Unfortunately, Garrone plays it straight too much of the time and by treating his subject matter with self-important seriousness, he undercuts his fantasy, which often devolves into a stultifying farce.

The film’s tonal inconsistency is extended to and exacerbated by the performances. Amongst the central royals, the only actor able to assume the material with true conviction is Jones, who delivers his outrageous lines with the necessary brio, while his face’s remarkable caricatural dexterity is a constant source of delight. Hayek, on the other hand, remains monotonously stern throughout, whereas Cassel’s humourlessness is so off-key, he seems to be in the wrong film altogether. John C. Reilly is introduced as Hayek’s painfully mismatched husband in the film’s opening, but his character is fortunately killed off within the first ten minutes.

Tales of Tales’ visuals, however, are a veritable triumph. A few negligible instances of ghastly CGI notwithstanding, the film is ravishing on every level. Costumes and make-up are lavish and uniformly stunning, the highly ornate indoor settings give each palace its own individually majestic flair, and the exquisite lighting of the exterior scenes, particularly those set in a moss-covered forest, endows the images with a painterly, otherworldly quality, conjuring a pitch-perfect aura of magic and reverie.

It’s ironic that Garrone chose to close his film on a shot of a tightrope walker, for it is precisely a lack of balance that prevents Tale of Tales from reaching the heights that despite the extreme ambition were well within its reach.

Tale of Tales premiered at Cannes Film Festival and opens on April 22nd. See our complete coverage below.