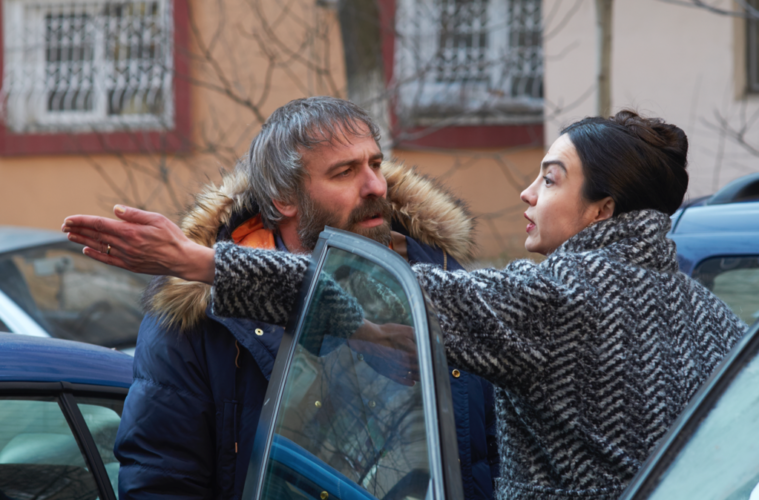 For this critic’s money, of the several excellent filmmakers to emerge from the Romanian New Wave, Cristi Puiu ranks as the most formidable. After kicking off his career in 2001 with the outstanding Stuff and Dough, a small-scale but expertly modulated road/drug-deal movie, Puiu made two bona fide masterpieces back to back: The Death of Mr. Lazarescu and Aurora. While his newest dramatic feature, Sieranevada, may fall just short of M-word classification by not reaching the same level of radical invention as its two predecessors, it is nonetheless another proud entry in Puiu’s stellar filmography.

Unlike Aurora, which was largely made up of silences, observing its solitary everyman protagonist as he wandered around before and after committing a quadruple murder, the dialogue in Sieranevada rushes forth in a stupefying torrent that begins as soon as the opening credits finish and is sustained almost without cease until the film’s closing image. And yet, despite this disparity, the two films could be regarded as companion pieces.

Lazarescu embarked on a vertiginous descent down the inferno of the Romanian health-care system (not coincidentally, Mr. Lazarescu’s first name was Dante), whereas Aurora and Sieranevada are purgatorial films. Their protagonists roam the still-smoldering ruins of post-Ceausescu Romania, rudderless in a hostile world where all convictions have suddenly disintegrated, deeply dissatisfied with their current situation and skeptical about the possibility of a brighter future coming around anytime soon. Both films clock in at three hours (give or take a few minutes), are set within a tight timeframe – 36 hours in Aurora, a single day in Sieranevada – and structure their minimalist narratives in a manner that disorients the viewer by eschewing exposition.

When Lary (Mimi Brănescu) and his wife Laura (Catalina Moga) drive to a family reunion at the start of the film, Puiu purposely withholds crucial bits of information: at whose apartment it’s being held, what positions the dozen other characters hold within the family, and even the very occasion for the gathering. These are not revealed for a long time – for instance, the fact that it’s a memorial for Lary’s recently deceased father only becomes clear about two-thirds of the way in. Apart from Lary and Laura’s initial drive and a short excursion made by the couple towards the end, the entire film takes place inside Lary’s mother’s cramped, comically cluttered apartment, and the viewer is thrown into this teeming and constricted space, trying to get her bearings by parsing meaning from the characters’ multiple, always heated and often overlapping conversations.

Sieranevada’s mise-en-scène is one of suffocation, making for a dense and demanding viewing experience. However, Puiu’s exceptional script – both in terms of the quality of the dialogue and the painstakingly progressive characterizations – foments a burning wish to figure out all the character configurations, conflicts and backstories, ensuring that Sieranevada remains consistently, intensely engaging. Thankfully, rather than opt for a hackneyed realist handheld aesthetic, which would seem the obvious choice in such a restricted and volatile environment, Puiu keeps the camera on a tripod, usually facing the characters and at their eye level. Together with the camera’s gentle and inconspicuous pans, its close proximity to the characters, and the extreme length of the takes that give the false impression of real-time, the viewer is made to feel like a participant rather than a mere observer in the characters’ excavation of the past – each other’s as well as their nation’s.

The concept of placing various characters in a huis clos and letting them loose on one another to provoke revelations and introspection is nothing new. However, what distinguishes Sieranevada from the majority of such chamber pieces is that it doesn’t involve an escalation of emotion. The characters are at each others’ throats from the get-go. As with Lazarescu, Puiu employs his exquisite sense of humor to alleviate what would otherwise have been a pure ordeal of a film. Furious debates about the plausibility of the fashion choices made by Disney princesses or the arrival of a completely plastered friend, who promptly passes out upon arrival and wakes up to vomit at various intervals throughout the memorial, are hilarious, exposing the humanity of these belligerent characters in order to evoke empathy towards them.

And the expression of genuine empathy finally emerges as the raison d’être for this superficially vitriolic film. In the wonderful closing scene, once almost everyone has either run away or been chased out, Lary and his brother Relu (Bogdan Dumitrache) finally sit down for a quiet moment together. What then transpires is a final touch that is as celebratory and affirming as the emphatic “Yes.” that concludes James Joyce’s Ulysses.

Sieranevada premiered at the Cannes Film Festival. See our festival coverage below.