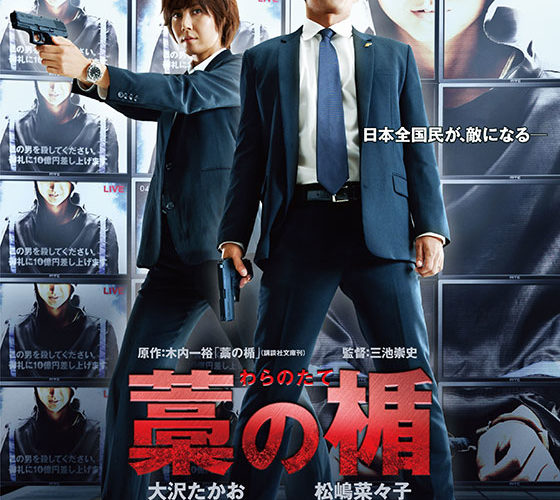 Takashi Miike might be the hardest working man in Japanese cinema at the moment, often making three to four different films in a single year. This uncanny output often times effects the quality of his films, making many of his entries feel rushed and lacking substance. With his latest work Shield of Straw, Miike starts off with a genuinely great premise that unfortunately fizzles less than halfway through. The end result is a missed opportunity on the grandest scale, because while Shield of Straw offers up some interesting moral quandaries amidst a compelling setting, it falls short in nearly every other aspect. The premise is the film’s greatest strength, as a billionaire’s daughter has been raped and murdered, her body dumped in a sewer by a wanted pedophile Kiyomaru (Battle Royale star Tatsuya Fujiwara). The elderly tycoon places an ad in every Japanese newspaper, putting a public bounty on Kiyomaru’s head for 1 billion yen, turning every day citizens into potential killers. This forces Kiyomaru to turn himself into the police after being attacked by his criminal roommate who betrayed him for the money. Now it’s up to four elite police officers to safely transport him to Tokyo before the next person betrays their moral code in the hopes of getting paid.

The first act is actually quite entertaining and offers a thrilling action set piece involving an army of police cars and a huge semi-truck. People, including police officers, nurses and everyday citizens, crack under the thought that their life could change instantly, for their family or personal gain. However, after this initial adrenaline burst and compelling character conversions, the film’s pace comes to a crawl. Scenes about whether or not the police should just kill Kiyomaru are repeated in succession. Meanwhile, the tension between the two main cops, Shiraiwa (Nanako Matsushima) and Mekari (Takao Osawa), is superficial and offers little depth to the flimsy performances from each. As the film trudges along painfully to its conclusion, the vested interest in the characters is almost nonexistent and nearly all signs of anything exciting have vanished. This shame of it all is that this film could have been amazing under a more adventurous Miike, one of of older days like Dead or Alive or The City of Lost Souls. Instead, it feels like he’s cutting corners just to finish the movie in a dull, yet efficient manner, perhaps because he was exhausted after orchestrating such a complex and entertaining first act. Even a Miike apologist such as myself has a hard time defending Shield of Straw, despite what could have been an opportunity to reestablish himself as one of the most important filmmakers out there, rather than the one who makes the most films.