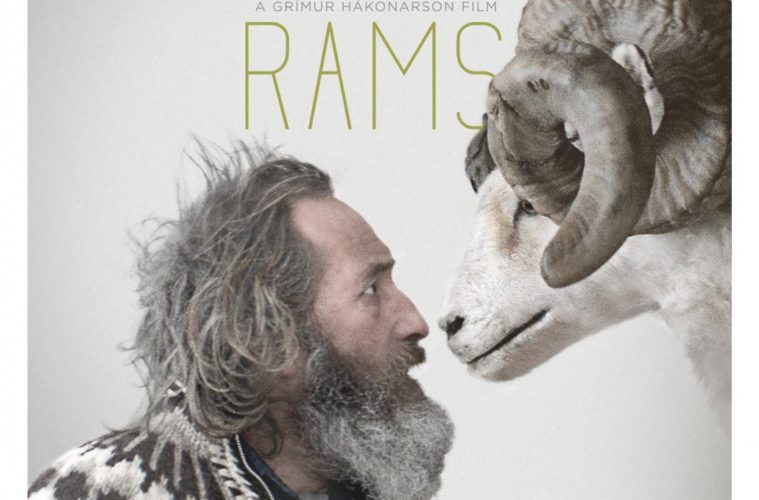 Following his 2010 debut, Summerland, Rams marks the second feature film from Icelandic director Grimur Hakonarson. Premiering as part of Cannes’ Un Certain Regard line-up, the film chronicles the tale of two brothers, Gummi (Sigurdur Sigurjonsson) and Kiddi (Theodor Juliusson), in a rural Icelandic valley who both make a living as farmers raising sheep and rams. In fact, they are the sole two breeders of a special stock of rams that are renowned for their excellent and sought-after qualities. However, the two brothers are not on speaking terms, quite literally for the last forty years, due to a divisive incident in the past. A breakout of a degenerative neurological disease which affects sheep, scrapies, affects both brothers in the valley. The government decides that all the flocks in the affected valley must be culled in order to eradicate the outbreak. So begins the central story, as we see how the two brothers must learn to move on from the past in order to salvage whatever little remains of their future.

The majority of the film is from the point of view of Gummi, the quieter and the less bashful of the two brothers. He leads a quiet, solitary life almost always alone except for occasional sightings of his brother, interactions with his brother’s dog and tending to his trusty flock of sheep. His only real interaction with others is whenever the valley farmers congregate to meet-up for live-stock competitions, funerals, etc. His brother Kiddi is louder, prouder and a staunch drunk but he too lives for his rams and sheep. This lonely duo is, conversely, complimented by a magnificent landscape of mountainous valleys that serve as a perfect backdrop. There is a primordial feeling given off by the terrain of the valley that fills the screen, in a way, compensating for the lack of space filled by characters or extensive dialogue. The breathtaking landscape of the film is actually but a small part of the charm of the experience in its entirety. Watching Gummi live his everyday life, tending to his flock, eating a simple lamb stew, making himself a Christmas dinner is strangely fascinating. These scenes make the movie feel intimate and manage to normalize a seemingly extraordinary rustic and almost hermit-like existence. This is not to suggest that there is some kind of exotic naturalism at play here, rather the camera seems to convey the grandeur of the landscape with humility.

As the farmers must decide how exactly they should respond to the call for their flocks to be culled, Kiddi is outraged that most of the farmers are considering acquiescing to the request without resistance. Gummi is of the same mind seemingly and this decision by the quieter brother widens the rift between the siblings. The escalating tension between the two is interesting to behold and, again, for the majority of the time it is Kiddi who escalates and generally acts antagonistically towards not only his brother, but all those around him, including the authorities who arrive at his farm in order kill his flock. The affection that both brothers share with their animals is admirable and, arguably, one of the most humanizing factors they each possess. The importance of the animals to their livelihoods and to the film themselves to some degree elevates the rams to such an extent that, as a group, they are almost an identifiable character. The sheep are not only a singular plot point but also the only thing about both characters can still mutually sympathize with.

Rams is a quiet, contemplative and intriguing film of a subdued nature that continually manages to hold one’s interest. With its naturalistic tone, it’s consistently entertaining in its own right. Part of its charm is due to the tranquil nature of the film but it’s also born from the earnest humanity that emanates from both brothers. There is a natural allure and honesty which extends to the aesthetic look of the film, creating an environment which doesn’t feel too produced but rather a snapshot of organic, country life.

Rams premiered at Cannes Film Festival and opens on February 5. See our complete coverage below.