Cannes Review: ‘Portrait of a Lady on Fire’ is a Film of Incandescent, Shattering Beauty 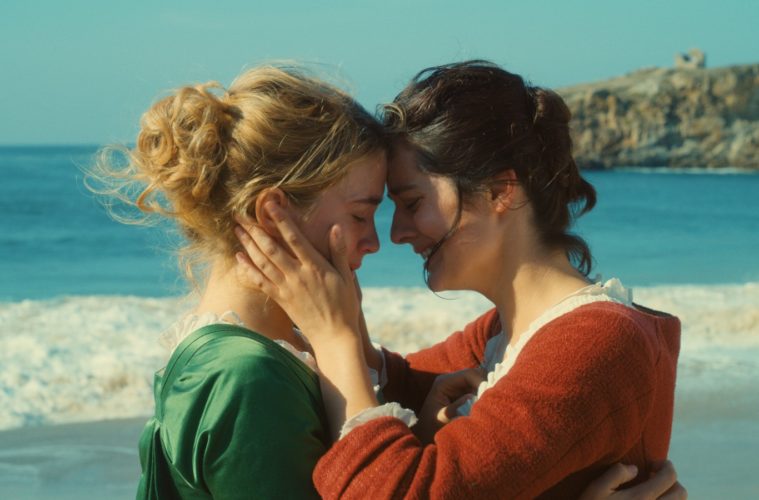 Héloïse bursts into the frame with her shoulders to the camera. She wears a long dress; it billows gently as she walks outside her house in 18th century Brittany and then flaps furiously as the walk turns into a run, her gracious figure thrust toward the cliffs and the ocean rumbling below–until the run stops, and in the time that lasts a hairsbreadth she turns her head back to the camera, smiles. It is the first time the luminous face of Adéle Haenel graces the screen in Céline Sciamma’s devastatingly beautiful Portrait of a Lady on Fire. And in a movie in which turning your head to look back acquires accrues a deeper, tragic meaning, it is a character-defining scene that thrums with the same spell-binding beauty of Denis Lavant’s last dance in Claire Denis’ Beau Travail.

Portrait of a Lady on Fire is a film of incandescent scenes and staggering wonder. It is a love story whose tragic finale is telegraphed in the very first shot and yet still feels unbearably painful when it is conjured. Its beauty resides, like few other films, in its timelessness. This a period piece that chronicles a week in the lives of two 18th century women and still feels eerily present, because the story it narrates, and the myths it harkens back to, have always been there. It’s a film that homes in on two characters and yet doesn’t feel minimalist in the slightest, but expansive in scope.

Titular lady on fire is Héloïse, a twenty-something stranded with her widowed mother and Italian countess (Valeria Golino) in a windswept stretch of France’s North West. Marianne (Noémie Merlant) is a girl the same age, and has been hired to paint Héloïse’s portrait. But Héloïse is not to know about the ordeal. Her sister recently died of a terrible accident–or did she choose to die?–and the girl has been plucked out of a convent to head straight into the fate that awaited her sibling. She’s a bride-to-be, and the portrait is to be shown to a prospective husband in Milan. Another painter came over to do what Marianne has been hired for. They failed.

Céline Sciamma’s cinema is process of self-discovery. Her debut feature, the 2007 Water Lilies (also starring Haenel), followed the sexual awakening of a teenage girl on a synchronised swimming team; her sophomore effort, the 2011 Tomboy, zeroed in on a 10-year-old girl seeking out some boyish freedoms; and her third feature, the 2014 Girlhood, chronicled a girl’s struggle to join a gang and acquire some confidence in the process. Portrait of a Lady on Fire is unmistakably in line with Sciamma’s leitmotiv, but while her previous characters fought to position themselves in the outer world, in the high-ceilinged, austere confines of Héloïse’s stately home, the universe that stretches beyond it remains a muffled, distant presence. This is not so much a film concerned about projecting an outward self, but nurturing and bringing to life one that remains hidden within.

And it’s a two-way process. The true entry point into the mysterious Héloïse may be Marianne–after all, it’s the painter who must decode and reproduce her beauty in what unfold as long, desire-charged painting sessions. But what Sciamma understands so well is that an infatuation this strong can hardly be trapped onto a canvas. It speaks its own language–one made of wanting gestures and searching glances, an unspeakable desire repressed in Merlant’s concentrated strokes and Haenel’s smile, her lips slowly softening the stiff stare into something warm and welcoming. And it defies all rules. In what stands as one of the script’s most inspired moments–one of many–Héloïse glances at the first version of the portrait Marianne paints of her, and shudders. Not because it does not resemble her, but because of the way Marianne seems emotionally detached from it. “I can tolerate the fact that it isn’t close to me,” Héloïse mutters, “but there’s no life, no presence.”

Like Call Me By Your Name–a movie Sciamma’s will make for a terrific double feature with–this is a tale of two people reimagining the world–and their place within it–as they open up and fall in love. But where Armie Hammer’s Oliver could tell Timothée Chalamet’s Elio “I know myself,” hinting a degree of self-awareness and maturity the younger boy was yet to achieve – there is no such asymmetry here. Héloïse and Marianne are both just as unprepared, just as ill-equipped to deal with the world-shattering relationship they enter. And this graces Portrait of a Lady on Fire with a sense of child-like wonder, the same endearing stupor Haenel’s Héloïse channels into that question she asks Marianne after a first moment of intimacy: “Do you think lovers believe they are inventing something new?”

Portrait of a Lady on Fire does not so much invent something new, but captures something as timeless and tragic as a first love–one that percolates with the sadness of an inevitable goodbye. It is a film of multi-layered conversations that never once feel excessively abstract or alienating. In one, the young women recount the myth of Orpheus and Eurydice: Orpheus, the Greek god who turned his head back to look at Eurydice as his lover reemerged from Hades, knowing all too well that doing so would cause her to vanish from the world. They wonder why the god would choose not to listen to the instructions he was given. “Maybe Eurydice was the one who said: turn around,” offers Héloïse, and what exactly she means by that is something Marianne will come to understand much later. Nothing lasts forever, nothing transpires as much incandescent beauty as the memory of a past love–a shared memory that will make them grasp for air anytime it will resurface, binding them in some unique, devastating way.

Portrait of a Lady on Fire premiered at Cannes Film Festival and will be released on February 14, 2020.