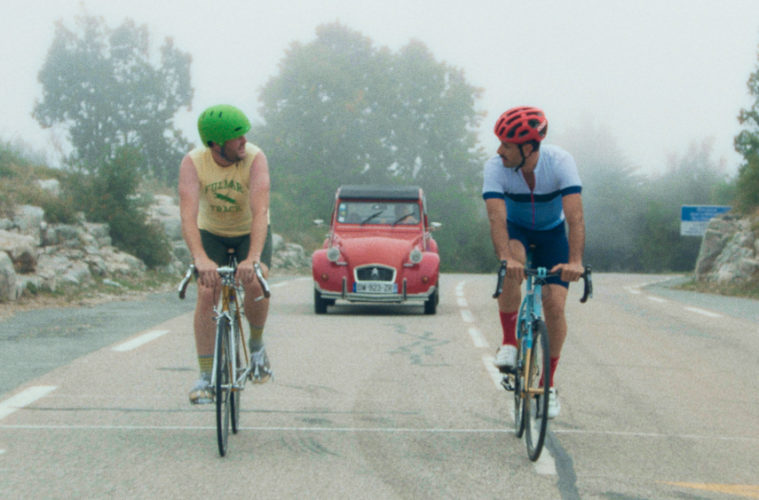 In The Climb–as occasionally in life–friendship can be an uphill struggle at the best of times. So how about the worst?

Michael Angelo Covino’s auspicious feature debut confronts that topic as a barometer might an oncoming storm. It’s essentially a buddy comedy, although one of the caustic variety, and built to make you squirm just a little, like Judd Apatow put through a filter of something like Festen or Force Majeure. It’s also a debut with the huevos to reach for a kind of auteur status (along with directing, Covino is credited as co-writer, co-producer, and co-star), the sort of film that leaves people talking about things like “cinematic language.”

For better than worse, Covino directs it to within an inch of its life, presenting the modest narrative as a series of meticulously choreographed vignettes; each shot in what appears to be a single take. The first of these is a great two-hander between Covino and his costar/cowriter Kyle Marvin, who plays Kyle, the lead character. (Michael, also rather neatly, plays Mike.) The men are shown ascending a mountain in France on touring bikes, dressed in lycra–not yet MAMILs, per se, but give it time. In the beginning the mood is light as the old friends reminisce but war breaks out when a past infidelity is revealed–Mike, as it turns out, has slept with Kyle’s soon-to-be wife. Covino shoots it facing downhill with the characters cycling upwards towards the moving camera, shouting at each other between gasped intakes of breath, occasionally exiting the frame as the cuckold chases the cuckolder down.

It’s a startling opening and funny, too. The ubiquity of the long take in contemporary cinema has long since robbed the trick of its allure, however as a mood tool–with that inherent sense of held breath–it’s still great for ramping up the intensity in these types of pressure cooker scenes. Covino and Marvin expanded The Climb from a short they made in 2018 that was essentially this opening sequence and, frankly, you wonder if it might be too strong an act to follow. The writers are charismatic leads but it’s largely thanks to the supporting cast that The Climb lives up to the promise of that curtain-raiser, and the director does well to introduce them just at the point when the film’s premise and novelty begin to wear thin. Chief among these is Gayle Rankin–so excellent in Alex Ross Perry’s Her Smell earlier this year–who appears as Kyle’s new fiancé Marissa in the second sequence and steals the show, tearing through scenes like a twister (if not quite her She-Wolf character in GLOW) and providing a pragmatic but effervescent Ying to Mike and Kyle’s bumbling, emotionally inept Yangs.

Covino and Marvin’s script races and rambles like a screwball comedy–all colorful insults and overlapping dialogue one moment, affection or even sex the next. Zach Kuperstein’s light-footed camerawork maintains a playfulness throughout that keeps it from dipping into novelty. The familiar and oh so welcome faces of Todd Barry, George Wendt, and Talia Balsam round out a great little ensemble cast.

The story takes place over a number of years but dips in and out, much like the aforementioned Her Smell or Danny Boyle’s Steve Jobs. We first meet Marissa during a Christmas party in Kyle’s family home. We will also witness a fateful New Year’s Eve, a bachelor party, and a wedding. The film is at its best when it simply allows Mike, Kyle and Marissa to spar–lovingly or otherwise–with each other on these heightened, life-defining occasions. Indeed, like any decent mountainous ascent, it is less about reaching the peak and taking a selfie then it is about the ride.