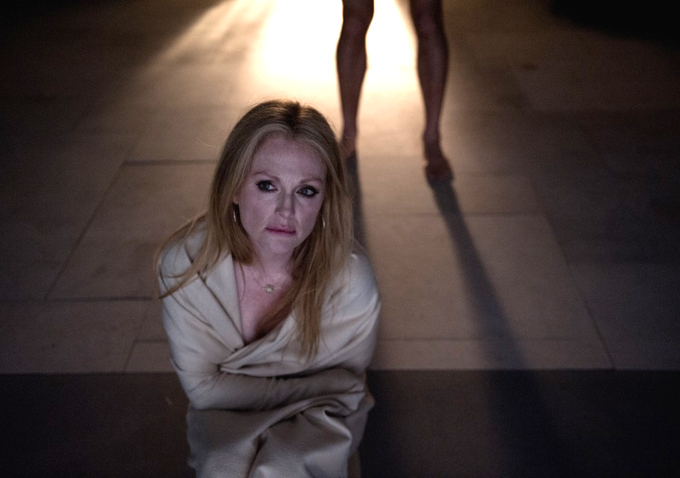 [Cannes Review] Maps to the Stars

After making one of the most authentically emotional films of his career with A Dangerous Method, David Cronenberg has begun exploring the world of artificiality. Cosmopolis, which may end up standing as the director’s best film, explored the idea of capitalism in the digital age by creating a language, a series of green screen windows, and, essentially, a society in which numbers and data trumped any factors that might be described as physical. The same could be said for Maps to the Stars, except the target here is the artifice of Hollywood.

It’s an odd choice for Cronenberg to take aim at the movie-making capital of the world. Surely he has had his bouts over the years with producers, but the director’s obsessions with the corruption of the body and the mind don’t seem particularly well-suited together. Wild Palms creator Bruce Wagner’s script for Maps to the Stars is, frankly, a complete mess of ideas that feels like an awkward marring of the writer’s own bones to pick (he has many) and trying to find material more suited to the hypnotic powers of this director. The result is something of a fascinating misfire, still shot and edited with the precise authority that has defined Cronenberg’s recent period, but jumbled in the search for narrative control and originality. For a director who has made many movies set in America without ever once leaving that all-too-useful place of Toronto, it is initially striking to see Cronenberg shooting in actual Hollywood (for at least five of the 24 shooting days, marking the first time he has filmed in the United States). These are real cars and real people searching through studio sets, big-windowed mansions, and high-class shopping malls. But that supposed reality is really a land of artifice; when Agatha (Mia Wasikowska) and Jerome (Robert Pattinson) take a date under the good old Hollywood sign, the rocky terrain resembles a perfectly lit set, and Agatha even feeds him his lines.

It’s one of the more clever and truly romantic sequences for a director who has done much to make human life seem alien, which is what a lot of Maps to the Stars does through overly broad gestures all too familiar to Hollywood satires after The Player (still the gold standard). There’s the young child star, Benjie (a formidable Evan Bird), who is a motor-mouth swearer and already progressing through drug rehab. There’s the unashamed references to real life actors and directors (including a cameo!) that panders for easy laughs (“We met on Twitter!”). And, of course, there’s the aging star who is not really that old, Havana Segrand (Julianne Moore). Havana works through her mommy issues in multiple ways, not only with her massage therapist (John Cusack) but also by planning to star in the film that made her mother (Sarah Gadon, effectively creepy though underutilized) famous before a fire took her life at a young age. Benjie, Agatha, and Havana make up the central narrative dynamic of Maps to the Stars, as Wagner’s script gets into the incestuous world of Hollywood’s sequels and remakes through, well, literal incest. The dull metaphor worked out here does mutate and become more and more strange — visions of the dead, Paul Eluard’s resistance poem Liberté, many fires, and eventual blood — that bring the film out of its broad strokes of pill-popping and the private-public blend. And Cronenberg certainly shows his constricting control of tone: a shot-reverse-shot conversation is always given very subtle touches in his direction under Peter Suschitzky’s intensely white color palette; they’re rarely shot equidistant from each other, the camera always slanted to give one character just a sly bit of power. Howard Shore’s futuristic tones carry a hypnotic force that guides the film through its obsession with destiny.

Cronenberg has never been one for straightforward plot developments, but it’s the psychological ones that suffer in Wagner’s script. As Maps reaches its last half hour, plot point after plot point never seems justified within the purview of the characters, as if guided by unknown forces (the power of Hollywood?). It’s a film that, more than any other work from Cronenberg, seems largely stilted, too unfocused to bring together a cohesive narrative thread, and one that suddenly zooms for an ending that feels entirely undercooked. Compared to the robust intensity in the final moments of Cosmopolis or the quiet horror at the dinner table that climaxed A History of Violence, Maps to the Stars ends on a fairy tale moment, one that unites the characters in a glimmer of both tragedy and hope (not dissimilar to Dead Ringers). But no matter the peace, it lacks that touch of excitement, the sense that this is where the film has been heading and the catharsis so key to his best films. What are we left with? A few pot shots at Hollywood that we’ve seen before; Cronenberg’s camera neither languors in the insanity nor feels particularly prickly. When these satires are now a dime a dozen, Maps to the Stars feels all too quaint to really cut into the movie-making machine.

Maps to the Stars premiered at Cannes Film Festival and will be released by eOne Entertainment.