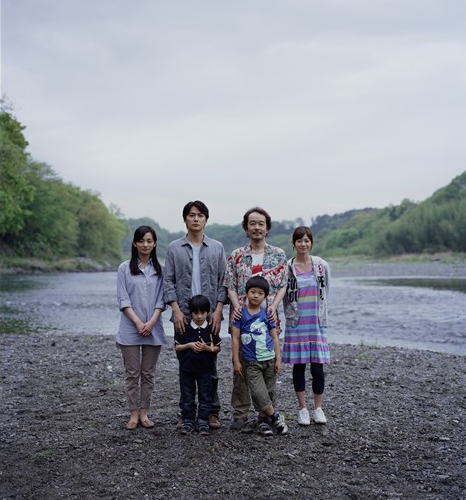 Few filmmakers can be said to have the same propensity for child actors as Hirokazu Koreeda. In 2004 he made Nobody Knows with an almost entirely adolescent cast, drawing a set of uncanny performances that resulted in the youngest person ever to receive the Cannes Best Actor award. Known for his intimately personal style of filmmaking and, often, drawing from his own experiences, there are always tugged emotional heartstrings that permeate the core of his films. With his latest title, Like Father, Like Son, the Japanese director drew from his experience of becoming a father to craft an intensely poignant film about parenthood.

The plot revolves around a young couple, Ryota (Fukuyama Masaharu) and Midori (Ono Machiko) taking their six-year-old son Keita to interview for an elementary school.  The family is upper class and slightly rigid, primarily due to the fact that Ryota is consumed by his work at an architecture firm and wants his son to have a good work ethic. Despite Ryota’s sternness and lackadaisical nature with Keita, Midori showers him with love and affection; for the most part, everything seems to be going well with family life. But the serenity is shattered by a phone call from the hospital where Keita was delivered, informing the parents of an unfortunate error that seems impossible to fathom: Keita is not their son, having been mistakenly switched with another boy. This revelation is the central conflict of Like Father, Like Son, and poses a series of philosophical questions about the true role of a parent. Do your own blood ties supersede six years of raising someone as your own kin?  When Ryota and Midori meet Yukari (Maki Yoko) and Yudai (Lily Franky), their life couldn’t be any different. They are a working class family with two other children to take care of and have a carefree approach to raising their kids, choosing to spend as much time as possible together so as to create a close-knit family unit. Partially pressured by societal norms, both families are encouraged to start the painful process of slowly switching children forcing Ryota to question what kind of a father he has been to his son.

Oftentimes heart-wrenching, Koreeda is able to weave a range of emotions by remaining slightly detached and observing the subtle mannerisms of both families; with such great performances from both of the child actors, it’s near-impossible not be bowled over by their struggle to understand what’s happening. Contained within his script, too, are outright revelatory moments — not just about the meaning of a strong bond with your child, but also how this connection affects the rest of their life.