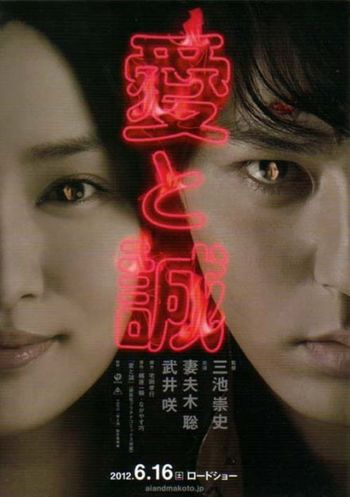 Takashi Miike (13 Assassins) is perhaps one of the most prolific filmmakers working in contemporary cinema today. He averages about 3 to 4 films a year and has created movies for almost every genre imaginable. With his newest film, For Love’s Sake — which premiered out of competition in the midnight section of this year’s Cannes Film Festival – the Japanese filmmaker infuses his trademark violent Yakuza tales with wacky slapstick comedy, while also simultaneously being a musical. It’s reminiscent of his first morbid musical, The Happiness of the Katakuris, in how zany the mix of intense violence is with colorful dance-heavy scenes. Despite the uneven tone and a running time about thirty minutes too long, For Love’s Sake is an enjoyable West Side Story-esque high school musical that pleases nearly as much as it disappoints. Adapted from a popular manga in Japan (familiar territory for Miike, having adapted several already including Ichi The Killer and Ninja Kids!!!), the plot revolves around a love interest that stems from a childhood ski accident. The film opens with an animated skiing sequence that feels ripped straight out of the manga itself, before plunging into live-action where we encounter our two principal characters, the bourgeois rich girl Ai (Emi Takei) and the hardened bad boy Makoto (Satoshi Tsumabuki). What follows is a ludicrous back-and-forth between the two, as Ai is desperate to reform Makoto from his violent ways by recruiting him to her fancy prep school. From there on out, the playground for Miike to play in is rich with cartoonish characters who abruptly burst into inane and often times hilarious song-and-dance numbers.

Featuring an odd blend of hyper-melodrama punctuated by scenes of intense but, for the most part, silly violence, Miike attempts to pull a delicate balancing act between genre lines. But as any fan of the filmmaker will tell you, it is these unexpected twists and turns in tone that make his unpredictability so fun to watch. After Makoto is reprimanded for his outlandish behavior, he is forced to go to a vocational school where he encounters a host of antagonist personas. It’s at this moment in the film where the music almost goes silent and the anime brutality kicks into high gear. Suffice to say, if you are uneasy with seeing students beat each other to a pulp, you might have a tough time with this one. Part of the joy and pain of watching Miike is seeing how his outlandish turn of events will conclude. In this case, there is an unnecessary storyline involving Makoto and his mother that slows down the finale of this otherwise bonkers musical. Some of the action scenes also tend to get overly repetitive and seem to unfold in the exact same way. Yet this is balanced out by some well-crafted sequences, such as a backstory of one character told entirely through a surreal theatrical reenactment involving childbirth and all. Though his films may be uneven, Miike is still a pleasure to behold and For Love’s Sake is no different, as it will undoubtedly appeal to the cult following he has garnered over the years with his increasingly bizarre body of work.