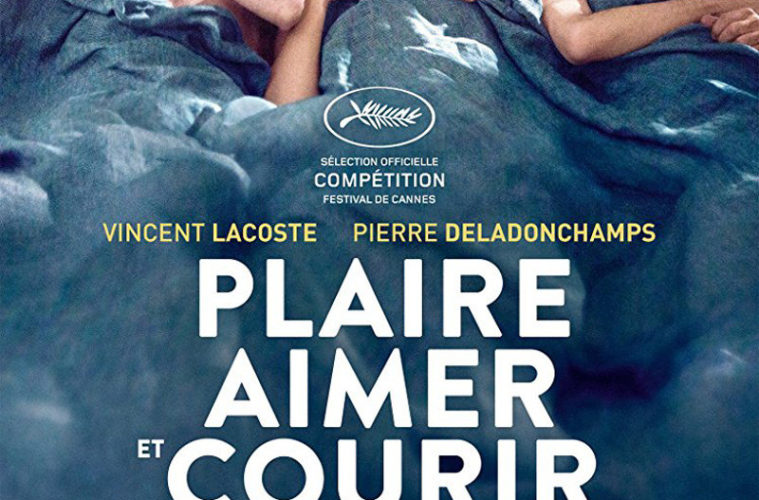 We can assume that Christophe Honoré’s 10th big-screen feature as director might trigger some viewers’ short-term memories — and perhaps apprehension, too. Considering the year that cinema has had, certain things inevitably spring to mind at the thought of a love story between an older, cosmopolitan, more worldly, more intellectual man and an intelligent, albeit impressionable younger guy; as does, in another way, the idea of an HIV story set in early-90s Paris. Some mistaken folk might even rush to call Sorry Angel “this year’s Call Me by Your Name” (you’d have to have been living under a rock to call it this year’s BPM), but it is a far more melancholic and drab piece than Luca Guadagnino’s all-conquering (well, mostly conquering) hit.

We’re in the city of love and it’s 1993. (Naturally, the AIDS epidemic weighs heavily over Honoré’s film and the characters therein.) Pierre Deladonchamps (the man who met the Stranger by the Lake in 2013) plays Jacques, a once-prodigal playwright who’s recently been diagnosed with the wretched virus. The younger man here is Arthur (Vincent Lacoste), a scout leader from Breton who studies philosophy and likes to read. You might see where this is going.

Jacques woos him with ease, first chatting him up at a screening of Jane Campion’s The Piano before reciting a well-oiled literary bit on the many ways one can define the blonde boy Arthur has recently been sleeping with. “Is he a Whitman blond or a Maxim blond,” Jacque coos. We expect it’s not the first time he’s used the routine.

What a desperate time it was. In 1993, Jacques’ diagnosis wouldn’t quite have been the death sentence it might have been a decade before. Nevertheless, the medication process at the time could, at best, only buy a patient a couple of years. We learn that one of his more promiscuous acquaintances continued to sleep around even after being diagnosed. Jacques’ final words to a dying lover on his last legs are flippantly used to tell the man to spare him any long goodbyes. In Jacques’ world, death has been stripped of all its grandeur. It has simply slipped into the everyday.

The question Jacques — and the movie itself — continually ponders is: how long does one really want to stick around for if one can no longer smoke cigarettes on late-night drives, or dance, or even get it up? We’re made acutely aware that there’s plenty of life yet in that particular old bone, but will it be enough to keep Jacques from taking drastic action? The thrill of the chase certainly still gets his blood flowing, as does — in a not so dissimilar way — the music of Cardinal and the Cocteau Twins.

More compelling is the character of Arthur, who comes to life through Lacoste’s performance, all boyish arrogance, raised collars, and lithe dance moves. Honoré is himself a Breton boy and would have been roughly the same age as Arthur in 1993, so if you get the whiff of the biographical here, Arthur is certainly the source. Honoré began his career in Paris in 1995, first writing for Cahiers du Cinéma before going on to novels, theatre, and, eventually, cinema. Arthur tells his friends he’s going to move to Paris and do all that sort of stuff. We see him visiting François Truffaut’s grave in Montmartre cemetery. One can imagine the director taking a similar pilgrimage as a younger man.

The constant nagging quality here, however, is how Honoré leans towards maudlin posturing whenever Jacques slips into one of his fits of depression. Rémy Chevrin’s deceptively weightless camera movements do as much as they can to offer levity to such scenes, often gliding through and reminding us, somehow, of Jacques’ youth (somewhere in his mid-to-late 30s) even as he faces the end.

Shot in gorgeous turquoise and cerulean blues by that fine cinematographer, it is often a remarkably beautiful film and, with that suggestion of real experience, an inevitably sad one. Such qualities might not be enough to entirely disregard any feelings of familiarity, but they might just be enough to forgive them. Nevertheless, we should take positives from the fact that these days, even in mainstream circles, Sorry Angel could be considered a little cliché.

Sorry Angel premiered at the Cannes Film Festival and opens on February 15. Find more of our festival coverage here.