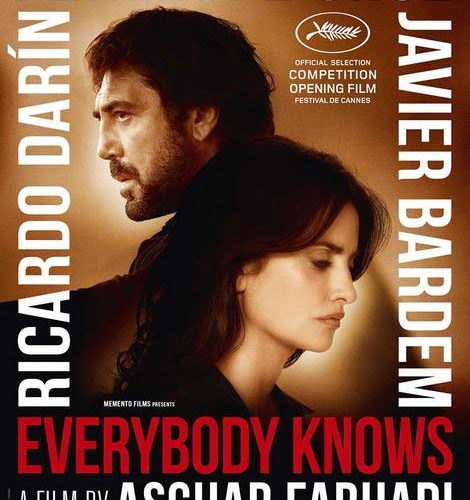 Disregarding the vomitus of clichés with which Asghar Farhadi introduces the rural Spanish milieu of Everybody Knows, for the first half-hour or so, the Iranian director actually appears to be trying something more structurally daring and compelling than in any of his previous work. In depicting Laura’s (Penélope Cruz) return from Argentina to attend a family wedding in her native village, the film flits through a vast number of characters and locations, drawing a complex web of connections amongst family members, friends and other villagers. The rapid succession of very short scenes disallows for a clear character configuration to emerge. Instead, a feeling of intimate acquaintance between all inhabitants of the small village is established, while the uneasy mix of social classes and scattered intimations of discontent amongst some of the characters hints at a rotten underside to the pastoral joviality on show. The ominous disorientation that arises almost gives the impression that Farhadi has taken a leaf from Lucrecia Martel’s mode of storytelling, but it’s not long before this fanciful notion is shattered. As it turns out, it’s simply a case of sloppy exposition.

Late into the wedding party, Laura’s 16-year-old daughter, Irene (Carla Campra), goes missing from her bedroom. The characters’ fear that she’s been kidnapped is confirmed when they receive a ransom SMS — the standard demands: give us an exorbitant amount of money and don’t call the police, or we kill the girl — and what follows charts the escalating paranoia and dissolution of familial and friendship bonds that accompany the search for Irene, which is led by Laura and Paco (Javier Bardem). It’s not immediately clear who Paco is, but his centrality in the wedding celebrations seems to indicate that he’s in some way part of the family. It later transpires that he is actually the son of the former servant and an old flame of Laura’s, and that the family harbors deep-seated rancor towards Paco for having bought a large piece of land from the debt-ridden father, which he then turned into a thriving vineyard while the father drank away the rest of his fortune. This begs the question: why was he so warmly embraced during the wedding and why is he so dedicated towards helping Laura in the first place? The answer to these conundrums, and the myriad others the film’s glaring lapses of logic will give rise to, is simple: the script demands it.

Overwriting has been the constant weakness in Farhadi’s filmmaking, but here the writer-director — who should really consider passing scriptwriting duties on to someone else for a change — truly outdoes himself. The narrative takes so many ridiculous turns in building up intrigue over who kidnapped Irene while simultaneously digging up buried resentments from the characters’ past, all for the sake of a narrative bombshell some two-thirds of the way in that most will have foreseen long before its embarrassingly earnest reveal. (During the Cannes premiere the audience started laughing at this attempt at heartbreaking pathos, and as the scene dragged on for way too long, Bardem and Cruz’s desperate overacting only added more fuel to the flames.) It would be fun to describe the further contrivances this revelation sets in motion, but that would represent a major spoiler, so suffice it to say that when at long last the identity of the kidnapper(s) is finally discovered, it is of as little consequence as the film’s Spanish setting or its would-be socioeconomic commentary.

Given the script’s reliance on tropes drawn from an extensive catalogue of kidnapping films, were it injected with a healthy dose of irony, all the overcooked plotting and preposterous intrigue could lend itself quite nicely to an enjoyably pulpy genre exercise à la David Fincher’s Gone Girl. Sadly, Farhadi has never demonstrated any capacity for irony, and instead of a bit of fun, all we get is a self-serious farce.

Everybody Knows premiered at the Cannes Film Festival and opens on February 8. Find more of our festival coverage here.