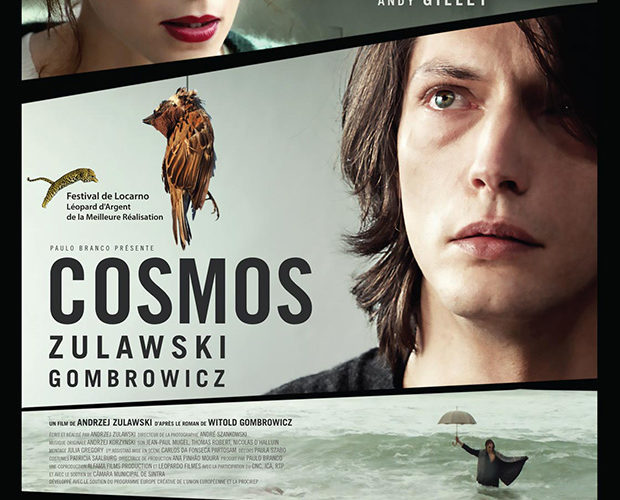 If there’s any way to synthesize the many pieces that form the bull-in-a-china-shop filmmaking that is Andrzej Żuławski‘s Cosmos, an adaptation of Witold Gombrowicz‘s novel, consider its status as his first feature in fifteen years. Might some sense of long-awaited release account for its why and how — the intensity of its performances, the force of its camera moves, the sharpness of its cuts, the bombast of its emotions? I’m inclined to think so, but it’s possible I’m only proposing this in search of a “what” — what’s going on, what he was thinking, and what we’re meant to take from any and all of it. Answers, if they do come at all, will only gradually present themselves, and they won’t arrive via exposition or, with some exception, clearly stated themes. A filmmaker who values the power of shock, but not necessarily thrills for thrills’ sake, Żuławski elucidates material with tools that announce themselves in their presentation — surprising camera dollies, fast pans, sudden cuts, overly prominent music cues — and raise complex questions about their relation to one another.

And what fun he has! For all the terror and pain it contains, Cosmos plays like a joyous experience for its creator from the first moment, an in-media-res introduction that takes all of three seconds to bring the lead character, some sense of his journey, Andrzej Korzynski’s chintzy score, and a main title into view. An immediate sensory shock works fine; information about this man, Witold (Jonathan Genet), and why he’s journeying into a mountainside resort can reveal themselves in due time. (In short: a young, struggling writer sometimes experiences romantic struggles and self-doubt.) Witold and a friend, Fuchs (Johan Libéreau), meet at the home and immediately discover some oddities: Madame Woytis, an owner whose manic, more-than-a-little-psychotic energy makes Sabine Azéma as good a casting choice as any; the owner’s niece, Catherette (Clémentine Pons), whose shyness may or may not be accounted for by her bizarre lip deformity; her daughter, Lena (Victória Guerra), whose beauty is either a part of or distraction from her inscrutability; and Léon (Jean-François Balmer), a man whose upper-class socialite status is hardly any mask for being a pig.

What follows for the next good while is a comedy of manners that recalls Buñuel in both its characters and focus on a crumbling bourgeois life — and the references to Pasolini’s Teorema aren’t for nothing; both he and Żuławski evince an obsession with human beings’ capacity for being disgusting — yet is far more manic in how it represents that. Certain motifs will immediately register for a surrealist aficionado — e.g. the abundance of insects, particularly in food, and everyone’s comatose or casual reaction to as much — but then something far more confounding will work its way into the same scene and mere seconds later. A flirtatious game of dinner-table hand movements between Witold and Lena, itself not entirely confounding, will be emotionally “matched” by a camera’s pull back in the next shot; another quick exchange will make it seem as if they’re possessed, totally lacking control of their bodies while shaking hands, only to return to a normal (“normal” relative to the rest of the film) tempo seconds later; or a jarring use of close-ups will give the impression that Cosmos, as a whole, holds some psychic attraction to her.

And so the how, what, and why of this film’s DNA will create a guessing game that, though fun, is precisely how we might lose the thread of things. These gestures are a conduit for emotional currents — chief among them heartbreak and anger, which Żuławski nests inside even the funniest moments. Maybe there isn’t a cultural criticism in the niece’s sole escape being a trip to see “Star Wars: The Last Episode”; if it merely seems like so, it’s from this suspicion that nothing else has been left to chance or coincidence. Almost anything can only be comprehended if seen as part of a continuum; as individual moments, they’d resonate in no significant manner.

The proceedings and formal dressings only begin to seem monotonous when the movie essentially restarts itself at the beginning of its third act, complete with a new location and the recasting of an ensemble member as a “new” character. Yet Żuławski keeps his mystery alive through the end credits, which doubles as a presentation of bits and pieces that, despite (or more likely because of) being excised from the climax, alternately clear some things up while raising more questions. The feeling we’re left with is perhaps best encapsulated by a recitation towards film’s end: “between grace and malediction.” I’ll be glad to nestle myself there time and again in the coming years, only half-hopeful that more answers will emerge.

Cosmos played at the Camerimage International Film Festival and opens on June 17.