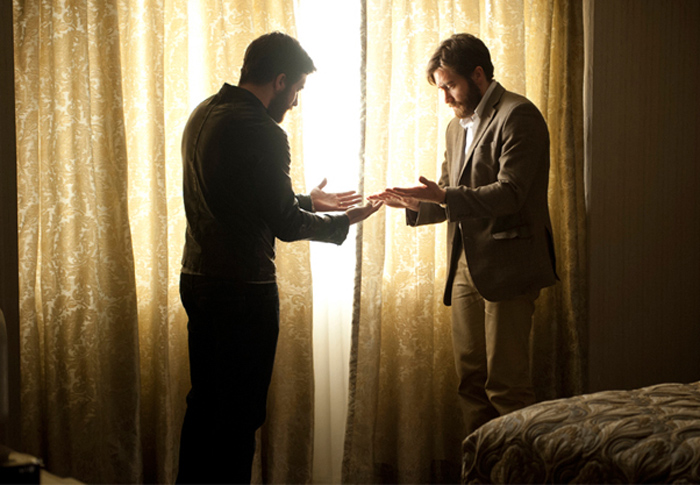 God, I hate this. Listing my 10 favorite films of any year turns into a kind of swirling existential nightmare faster than returning to my old high-school town. For one, I know I’m going end up discounting some films that have immense technical virtuosity just because they felt too thin or didn’t land quite right. (Sorry, Birdman.) Then add onto that the fact that I won’t get to see some of the big players before the New Year. (I’m still waiting for Selma and Inherent Vice.) Of course this isn’t even getting to the films that I want to vaunt above the rest just because they had the guts to try something and really “go for it,” but just can’t see fit to putting in my top 10. (Hello, half of my Honorable Mentions.)

So here’s the deal: there is literally no discernible metric to how I decided this list. I wrote down the 25 films I liked the most this year, picked one, then just asked, “Did I like X more than Y?” If I did, X suddenly became number one. Then came film Z, which could slot in anywhere. This list is wholly subjective, driven purely by emotion. It is, as the title suggests, purely mine. Is yours different? Good. I hope so. That’s what’s great about film: it is intensely personal.

There is something thrilling about watching a person struggle against incredible odds. Lots of movies take this tact, though usually the odds and the struggle are world-shattering, like an alien invasion or a terrorist threat. In the case of Locke, Tom Hardy plays a man raging against his own poor decisions and their unexpected outcomes, and the movie is all the more thrilling because he does something rare in modern storytelling – he takes responsibility, assumes the risks and consequences, and does not shrug off the weight of what he has done or will do. In addition to being a beautiful formal exercise and a well-written character drama, this film is a flawless modern morality tale. Sure, the film has some flaws. I think Nolan‘s visual style suffers with the absence of his usual collaborator, Wally Pfister, though Hoyte van Hoytema still shoots a beautiful film. All the same, Interstellar swings for the fences, and while it might throw out its shoulder and stumble on a twisted ankle in the homestretch, I’ll be damned if the ball doesn’t fly high over the fences and the runner doesn’t get the run (to stretch a metaphor to its breaking point). Nolan finds an incredible emotional depth in his material, performers, and narrative, making this the first of his works to bring tears to my eyes. The score is a bombastic overture perfectly in line with the starscapes and planets on display, and the overflowing optimism about humanity’s ability to reach to new heights makes this a powerful, worthy cinematic experience. The world of Nightcrawler is a strange and terrifying one, but one in which you cannot help but want to dwell. For one thing, it is repulsively beautiful, all neon and sulphuric street lights, blasted planes of blacktop and palm trees. Then of course there is our guide through this nocturnal hellscape, Lou Bloom. Gaunt, gazing, and possessed of a fiery passion for his own self-interest, Jake Gyllenhaal inhabits a skeletal monster with the kind of vigor and power that would make him a compelling hero were his intentions and actions not so repellent. The story tightens like a noose, but one which you know Bloom will slip out of while still finding another neck for the karmic hangman to dangle. It’s powerful, crazy stuff, and surprisingly fun.

Marion Cotillard has the visage of a classic movie actress, with the eyes and presence of the old goddesses of the silver screen. It is only fitting, then, that she should fit so comfortably into the shoes of an early-20th-century immigrant hoping to find a new life in the hopeful, fruited planes of America. Conveying determination, mistrust, hope, and often times bewilderment, Cotillard carries this film as ably as the film itself evokes an America left long in the past. A movie with classic blood in its veins and classic tune on its lips, yet with a depth of substance and sense of story that is wholly modern, this is the kind of film that doesn’t get made enough, mostly because it’s so damn hard to get right. Let’s just be honest; you’ll see some shit in this movie that you simply will not see anywhere else. The scene with the axemen and the fish is itself worth the price of admission. Then there is Tilda Swinton‘s madcap performance, John Hurt‘s limbless, shambling leader, and Chris Evan‘s stalwart central performance. This is a film that takes you through a wringer both physically and emotionally, breaking you down and making you stare deeply into the horrific void of humanity’s excesses and faults. By turns thrilling and horrifying and oddly funny, Snowpiercer will blow away almost any other film you see in terms of both action and existential interrogation. Wes Anderson has a certain picture-book aesthetic that people tend to either love or hate, but he rarely (if ever) really makes excuses or justifications for his continued work in that vein. This movie, however, serves as a kind of bold declaration of purpose while at the same time pushing his signature visual style to its limit. The immaculate compositions and impeccable symmetrical tableaux stylings contrast vividly and entertainingly with the violence, language, and mayhem on display. Ralph Fiennes balances his character like an expert conductor in front of a precision orchestra, deftly layering emotions and actions and motivations and bringing to the fore those that best serve the scene. A delight.

4. Under the Skin (Jonathan Glazer) There are a lot of expectations related to film, especially certain genre titles, and Under the Skin defies all of them. Formal convention-busting aside, this is a movie with so many layers and possible subtexts that books could and probably will be written about it. Scarlett Johansson delivers a performance that is literally transformative, alien, and alienating. The way she delves into the dawning consciousness and conscience of an alien is transfixing. Add on to that the formal accomplishment of a car outfitted with hidden cameras to capture her spontaneous, improvised interactions with actual people on the streets of Scotland, and you can’t deny the accomplishment that is this film. Speaking of formal accomplishments, any list of exemplary film experiments from 2014 would be remiss to overlook Boyhood, the 12-years-in-the-making project from Richard Linklater. In Ellar Coltrane he found the perfect conduit for the story of a boy growing into young adulthood. Filled with small details both universal and deeply personal, this film is a perfect and unerring examination of the slow decay of innocence into experience. Never showy, and always emotionally honest and true to a fault, Boyhood is a work that will stand for ages as a stunning exertion. There’s something special about a film that can tackle religion and politics with a humanist perspective while seeming devoid of a specific outlook. The truth of these forces in our life is mystery enough without trying to decide what is right or wrong, and in Ida, Paweł Pawlikowski explores these topics with a deft hand. Using compositions that evoke the liminal stage of a spirit reaching a state of grace and a palette of ink and ash that muddies the usually stark images of black-and-white photography, this is a delicate, quiet, beautiful film that examines the mind and soul. Upwards of five or six views in the past year and I still cannot speak with any real authority as to what this film is actually saying, specifically, but I know what it is saying to me. The defiance of a clear, precise, true read on the material is just one reason to love this twisty, poisonous tale. Jake Gyllenhaal (appearing for the second time on this list in a lead role) flawlessly and effortlessly fills two parts, not so much sides of the same coin as two possibilities of a single man. The images — derived from the alien aspect of the Toronto skyline — both complement the themes and distance the viewer, as though these characters inhabit a distant planet. The piss-and-smoke color of the world only adds to the strangeness, and, mixed with the engrossing story and labyrinthine thematic implications of the action, it all creates the perfect storm of a film. Not to be missed, and never to be forgotten. Effortlessly the best of the year.