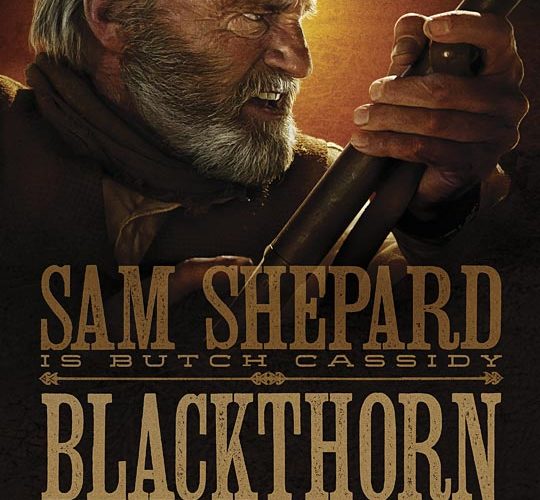 Stepping into the iconic shoes previously worn by Paul Newman in Butch Cassidy and the Sundance Kid, Sam Shepard is more than worthy to portray the iconic gunslinger. Mateo Gil, who wrote such films as Agora, The Sea Inside and Abre Los Ojos/Vanilla Sky, has directed the western Blackthorn. The film tells the story of Butch Cassidy, if he didn’t reportedly get murdered by the Bolivian army.

I was able to check out the film at Tribeca Film Festival this spring and it a well-crafted western. The first act is a bit dry but things really kick into gear when Cassidy teams up with the criminal played by Eduardo Noriega. The trailer also gives us a glimpse at a fantastic shoot-out in the middle of the barren desert. Check it out below via Apple for the film also starring Stephen Rea and Magaly Solier.

It’s been said (but unsubstantiated) that Butch Cassidy and the Sundance Kid were killed in a standoff with the Bolivian military in 1908. In BLACKTHORN, Cassidy (Shepard) survived, and is quietly living out his years under the name James Blackthorn in a secluded Bolivian village. Tired of his long exile from the US and hoping to see his family again before he dies, Cassidy sets out on the long journey home. But when an unexpected encounter with an ambitious young criminal (Eduardo Noriega) derails his plans, he is thrust into one last adventure, the likes of which he hasn’t experienced since his glory days with the Sundance Kid. Blackthorn hits VOD on September 2nd and in theaters on October 7th, as recently reported.