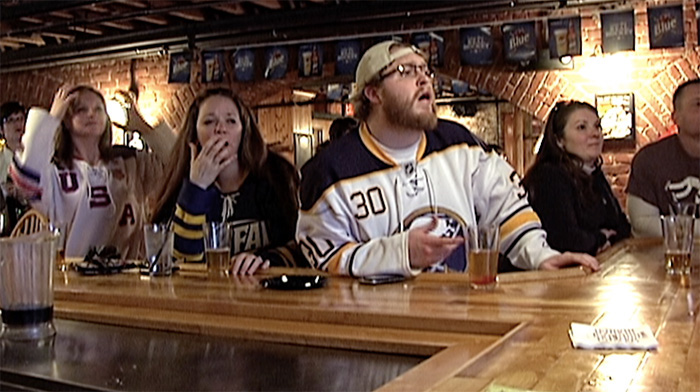 BIFF Review: ‘The Fan Connection’ is a Love Letter to Buffalo’s Rabid Fandom

Buffalo sports fans are die-hard. Go to most big cities across America and you’ll find a Queen City backers’ bar of ex-pats communing to enjoy (and, this past decade, lament) the teams they grew up watching beside their parents. It doesn’t take long for the electricity and excitement to flood back upon returning home either whether for new job opportunities or a weekend vacation—something Mary Wall discovered by watching her hometown Sabres’ wild NHL playoff run in 2006 while on her two-month hiatus from working as a long-time production assistant on “The Office.” Everyone came together as one to cheer on the blue and gold, driving to the airport to thank the players after a heart-breaking game seven defeat to the eventual Stanley Cup champions, the Carolina Hurricanes. It therefore made sense for her to spend a full season in Buffalo to follow around a few fans as they went about their daily lives and let their rabid fandom loose on game nights. What began as the simultaneous journeys of thirteen different people over the course of four years (culled from one hundred and seventy applicants at her original casting session) was eventually pared down to three lead “units” possessed with as much personal intrigue as Sabres adoration. Wall then spent the next four editing The Fan Connection together as a human story of perseverance against the backdrop of both the Sabres’ nail-biter of a 2011-2012 season and the first steps of the city’s riverfront rejuvenation. She ultimately reveals how you should never count Buffalo out.

The film is very much a home-video love letter to a way of life that many outsiders refuse to believe exists in Buffalo, New York since the national media finds it funnier to joke about cold winters and snow in ways that make it seem the Great Lakes region is America’s Siberian wasteland. Wall’s project therefore proves a wonderful tool as far as correcting some common misconceptions about the area on the back of a more universally understood topic like hockey. Fans of the game will follow the metaphor between a team on the downswing clawing its way back from obscurity and the citizens going along for the ride projecting that same toughness on the ice to their own troubled and uncertain lives. It’s the underdog mentality incarnate.

Mark Crehan can use the Sabres as inspiration to conquer driving despite his cerebral palsy. Hannah and Renée Tarrant can bond over the sport their late father/husband loved as much as them. And the Davidovichs (Frances and Michael’s nonagenarian couple) can hold the team as their constant once health issues (alongside those suffered by their daughter Michel Coffey) threaten to defeat an otherwise infinite well of optimism. So while the games continue rising back to the forefront throughout, they’re just a complement to what’s happening in these characters’ personal lives. When the Sabres start losing, tragedy strikes. When their subsequent winning streak begins, the acceptance that hope can prevail in all aspects of life shines bright. While Buffalo might never win a championship, its fans will never give up hope.

The Fan Connection is a bit rough around the edges as far as production value goes due to its shoestring, one-woman show budget helped only by a Kickstarter campaign during post-production, but don’t let that deter you from seeing the heart and humanity present in every single frame. The progressions taken by Crehan, the Tarrants, the Davidovichs, and Coffey are really the draw here whether or not the hockey stuff finds itself stealing our attention away during certain stretches of time. How they defeat what ails them—physically and emotionally—while the team overcomes its own adversity should be enough to grab audiences with no knowledge of Buffalo itself. This is good since the experience of watching as a Buffalonian in 2019 is a bit weird. I say this because I know how the riverfront project evolves and how bad the Sabres (and Bills) have fared in the years since. We’re watching a hockey season and a community’s unknown future unfold eight years later, so it’s hard to not let my first-hand knowledge of the proceedings color things. In that regard I’d have liked more time devoted to neighborhood organizations like PUSH and Bailey Fights Blight and more “after” footage of places like the North Park Theatre—or perhaps none of them at all. The whole sometimes feels as if it’s two movies cut as one with the fans’ stories competing against the city’s momentum for screen-time only to have the former win by a landslide. Ninety-minutes is too short to do both justice.

Because the main characters’ trajectories prove so inspiring, outsiders should be able to latch on and let the rest of what Wall includes become context for their respective fights. The connection between their community service and Buffalo’s beautification is a bit vague, but I get the desire to want to pivot towards initiatives run by POCs since the city is only 43% white despite the film being 90%. (The Tarrants do, however, volunteer with Bailey Fights Blight.) It’s simply another reason why the Buffalo rebirth angle demands a more complex and robust film of its own. Hockey having its own diversity issues only augments this fact regardless of the stories included all being deserving. Sometimes not talking about that racial divide only makes it more glaring.

The Fan Connection played at the Buffalo International Film Festival.