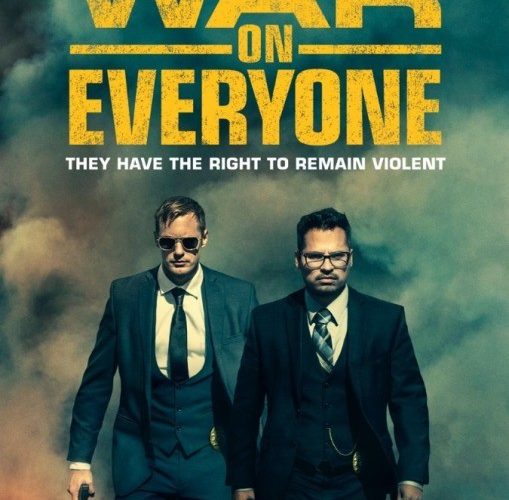 [Berlin Review] War on Everyone

Steering into the frame to the sound of ’70s rock music while giving chase in their muscle car to a fully-costumed, on-foot mime, the impeccably dressed, utterly corrupt police duo of Bob Bolaño (Michael Peña) and Terry Monroe (Alexander Skarsgård) initially appear to be running full-speed towards an even wackier version of the Starsky & Hutch movie we got in 2004. Audiences familiar with the work of director John Michael McDonagh (The Guard, Calvary), however, will know something else must be in store with War on Everyone, even if McDonagh himself has made no mystery of the slightly broader canvas he’s working on this time around.

The Albuquerque of War on Everyone comes across as a mostly deserted playground in which Bob (a smooth-talking, casually ruthless family man) and Terry (an aimlessly intoxicated human bulldozer) can operate in complete disregard of the law and chain of command. Bribing, assaulting, and stealing their way to the top, the two friends brush aside the occasional scolding from their boss (Paul Reiser) before resuming their plans to hijack a potential heist and pocket the money. Blackmailing informers and strong-arming suspects, they grow too confident and run afoul of English expat gangster Mangan (Theo James), the only guy in town who’s willing to resist the crooked arm of the law.

Seemingly intent on testing how black your humor can get while not breaking the film’s more playful and witty throughline, McDonagh goes to some new extremes when compared with his first two Irish-set outings. The problem with War on Everyone is that his signature blend of absurdist characterization, purposefully random bits of intellectualism, and sudden bursts of violence were so effective in, for instance, Calvary’s more pensive milieu, for those were allowed to stand out and color the narrative. Relocating this story to the States, the director is not unintentionally turning up the volume and making his western fascination a bit too literal to still be able to sustain his distinctive tones. If Calvary was more of a “war on one,” as poor Brendan Gleeson could not find a good soul in town to save his life (literally), this here is a furious free-for-all you don’t remember the start of and can’t imagine an end to.

The flipside of that coin is that McDonagh’s directorial style evolves in the same direction, giving way to more pronounced and expressionistic visuals. With its bright palette, stark color contrasts, and lopsided camera angles, this is a deliciously abstract portrait of Albuquerque in which every wallpaper, nightclub light, and car-wash spin makes for evocative, retro-style imagery. And it’s not all in service of the verbal and physical mayhem, either — Skarsgård’s character in particular is granted a series of more reflexive segments, thanks to his improbably profound involvement with Tessa Thompson’s Jackie.

Permanently hunched forward and mostly unable to walk in a straight line, Skarsgård’s Terry looks like a giant threatening to stomp on a village. His admiration for Bob’s more nuanced skill set and verbal dexterity is endearing, and it nicely assists Peña’s performance. An actor of extraordinary intelligence and perceptiveness, the Ant-Man co-star offers a re-working of his similar but strictly dramatic End of Watch role, polishing it off with his underused gift for comedy — the man would make just about any character likeable, and McDonagh’s artificially edgy, anti-heroic constructs are not even a challenge in that regard.

A noticeable step down from the highs of The Guard and Calvary, War on Everyone is still only McDonagh’s third effort and nonetheless a bold, lively endeavour. Much like Terry, it feels like muscle-flexing that inadvertently knocks down stuff and could use some restraint.

War on Everyone premiered at the 2016 Berlin International Film Festival and opens on February 3, 2017.