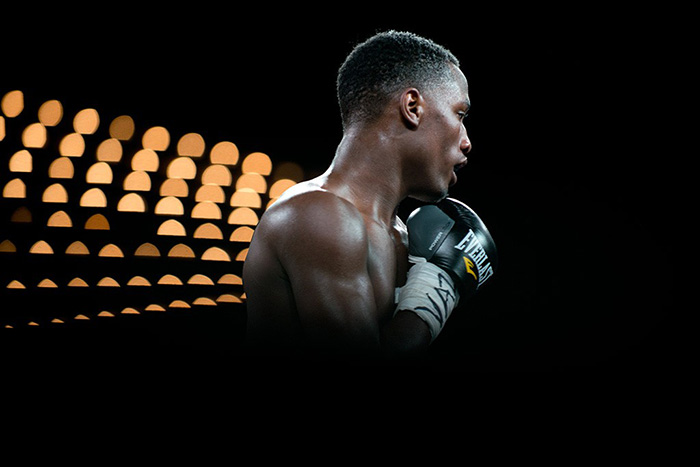 Boxing became the way two fathers in Chicago could keep their sons off the streets. Kenneth Sims Sr. was a brawler back in the day before turning his passion into a career as a coach. Destyne Butler Sr. was a pugilist aficionado who succumbed to the allure of drug dealing before getting out of the game. They therefore knew how easy it was to fall into a hole that seemed impossible to climb and what it took to do exactly that. So they used the sport to insulate their namesakes until both became highly touted as potential Olympians for 2017 when they were still just twelve years old. While neither would ultimately make good on that promise for very different reasons, boxing remained their path towards salvation anyway.

German director André Hörmann followed these boys’ trajectories for eight years to construct the inspiring, heart-breaking, and relevant documentary Ringside. In it we meet Kenneth Sims Jr. and Destyne Butler Jr. years after news reports declared them “kids to watch.” The former talks about hating boxing when he was younger only to have his father say he had to get good before he was allowed to quit. It was a successful strategy since getting good meant Kenneth Jr. no longer wanted to give it up. Because Destyne Sr. didn’t want to be the type of parent who forced his kid to do something he didn’t love, the latter wasn’t given a similar ultimatum. It sadly wasn’t long after taking off the gloves that Destyne Jr. went to jail. Here they are on the cusp of Olympic qualification: one preparing himself for the fight while the other is unable to take his chance. Hörmann never seeks to pass judgment on either father’s choices, though. Would Destyne Sr. love to go back and keep his son from following the path he had already fell prey to before digging himself out? You bet he would. That doesn’t mean it’s his fault Destyne Jr. is behind bars nor that he believes it is. It doesn’t mean Destyne Jr. is a bad kid either. He owns his mistakes and his father refuses to pretend it should be any other way. There’s a very strong sense of responsibility instilled within the teen — the kind that would have served him well during training.

Kenneth Sr. is the first to admit his son had no say and we’re quick to acknowledge his luck that this method didn’t backfire. How many kids in similar situations rebel against authority and find their parents’ love pushing them to do the opposite of what they ask regardless of whether they want it too? More goes into Kenneth Jr. staying true to his goals and extricating himself from situations where drugs and crime would crop up than Dad’s goals. Just like Destyne Jr. chose to diminish boxing’s role in his life and find the opportunity to fill his time with less savory endeavors like burglary, Kenneth Jr. chose the gym. Hörmann isn’t as much interested in answering “Why?” as he is highlighting the contrast’s subtleties. On paper these boys were the same but for minor differences that might have held defining importance. One lived in the city in his parents’ cramped one-bedroom apartment while the other found his family moving to the suburbs (preconceptions could have you guessing wrong as to which was which). Maybe Kenneth having his father as a coach influenced him to stick with it where Destyne couldn’t. Maybe one was protected from the limelight of expectations more than the other or perhaps one was simply built to accept them more readily. Since it eventually takes losing a huge bout for Kenneth to finally buckle down and go for glory, who’s to say Destyne’s winning ways didn’t lead to complacency and therefore the slippery slope that consumed him?

Where most documentaries would seek to discover these answers through extensive research, Hörmann dedicates his film to portraying his subjects’ relentless perseverance removed from them. It doesn’t matter how these boys entered into their current predicaments, only what they do to maintain or change course. How do the senseless murders of friends affect Kenneth’s resolve? How does the penal system’s objective desire to keep young black men down prevent Destyne from having the opportunities young white men in similar circumstances would? There’s ample room for both of them to implode and crumble under the pressure they face. So rather than blame their fathers for where they are, we can instead praise them for helping to carry each son further. This is purposeful tough love with real world impact. It’s also an impressive example of hard work’s spoils. Kenneth may have the freedom to ascend much higher and much faster, but you can’t dismiss the mental and emotional strides Destyne takes to even think he could jumpstart his career upon release despite being away from the sport for half a decade. Neither portrait is more resonant than the other either — only more personal for those audience members that can relate to one path above the next. We could spend hours figuring out every little detail that separates the two and yet never approach the sheer brilliance delivered by showing what unites them. Theirs aren’t stories of God-given athleticism and destined greatness. No, their successes (and failures) are a product of their ambition, hunger, and regret.

You’ll find yourself rooting for them from the moment you hear their voices candidly speaking about their lives’ complexities. You will get nervous when Kenneth enters the ring for the first time as a professional boxer and lament the setbacks Destyne endures that are wholly out of his control. These men therefore serve as role models to aspire towards much like their fathers were for them. Kenneth Sr. and Destyne Sr. may wish their sons looked up to better men than them, but that’s only because they still see themselves as their pasts rather than presents. It’s this hindsight that transformed them into men worthy of redemption and Kenneth Jr. and Destyne Jr. can aspire towards the same. If Ringside is any indication, they’re well on their way.