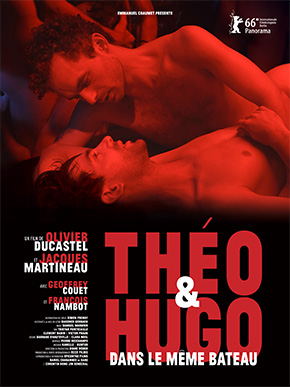 In 2004, it looked as if Team America: World Police had hammered the last nail in the coffin for cinema’s definitive sex scene. Then, last year, in Anomalisa, Charlie Kaufman — also working with puppets — found new and interesting nuances in that most hackneyed of cinematic clichés. The opening sequence of writers-directors Olivier Ducastel and Jacques Martineau’s latest film — where, in the red-lit basement of a Parisian sex club, two young men feel about, lock eyes and elope before walking the streets together — also breaks new ground in this regard. It’s a scene with a purpose to drop the audience into this world with apparently genuine onscreen sex, real-time shooting, and a brilliant surrealist flourish combining to make one of the most dazzling set pieces of this year’s Berlinale.

Paris 05:59 won’t return to such dizzying heights again in the scenes that follow, but the second and third acts also offer a fresh twist on another romantic staple: post-coital catastrophe. Their walk through the Parisian night plays out like something from Richard Linklater’s Before trilogy, but with the added edge that Hugo (François Nambot) is HIV-positive and Théo (Geoffrey Couët) has acknowledged that he wasn’t wearing a condom. They both flip a lid when the gravity of this situation dawns on them.

Their night takes on the feel of an odyssey through the dark streets, take-out restaurants, and emergency rooms of the French capitol. The conversations fluctuate between moments of panic, goo-eyed love, and casual banality. Having observed that only women seem to be working the night shift at the hospital, Théo remarks that they and homosexuals “own the night.” It’s in these more self-conscious moments that Paris 05:59 loses the run of itself. A Syrian guy working the late shift in a kebab shop offers his views on the country’s current crisis. Later on, an early-morning commuter regales our lovers with her life story. These few overworked moments in Ducastel and Martineue’s script only work to break the spell of realism that’s been cast in the film’s second and third act.

Linklater’s films are clearly a precursor here, but perhaps Andrew Haigh’s Weekend is a closer relative. Haigh’s debut really nailed the insecurities of discovering a lover’s idiosyncrasies and flaws, those that grate and those that charm. Paris 05:59 manages to capture that as well, and in doing so creates a sense of ambiguity as to whether any sort of love between the men can last. As the English title suggests, time is also a vital character. With their youth in such jeopardy, their shared trauma raises the stakes for their relationship and adds a good helping of spice, an anxiety that is heightened by the fact that the film plays out in real time. The director ends each act by overlaying the image with a large digital clock as a reminder.

The Futura bold opening credits that Ducastel and Martineue use — made famous by Jean-Luc Godard and replicated brilliantly by Gaspar Noé, among others — are generally a sign that the filmmaker(s) is attempting to say that the audience should prepare themselves for something bold, fresh, and exciting. Paris 05:59 is one of those rare occasions in which such anticipation-mongering is warranted.

Paris 05:59 premiered at the 2016 Berlin International Film Festival and opens on January 27.