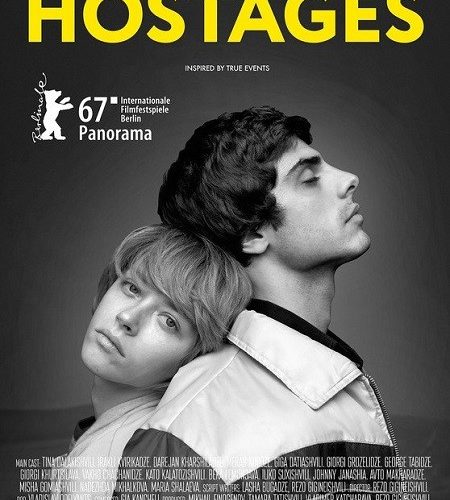 Based on actual events from 1983, when Soviet citizens were not allowed to travel abroad, the film recounts the life of seven young Georgians leading up to and after the deadly hijacking of Aeroflot Flight 6833. A first taste of the casual bleakness behind the Iron Curtain comes early: as aspiring actor Nika (Irakli Kvirikadze), his bride-to-be Anna (Tina Dalakishvili) and friends are doing what people their age are supposed to do – drinking, smoking, hitting the waves – they’re being closely watched by the police. “Are you worried we might swim to Turkey?” Someone from the clique gets out of the water and tries to appease the officers by offering this cheeky remark, all smiles. Except going to Turkey is of course exactly what they were thinking about.

Over the course of the next hour, we’re introduced to the group members and their families. Whether student, artist or priest, “terrorist” would seem like the last word to use to describe these gentle, loving free spirits. So you almost have to doubt yourself if you heard that right when, in between church services and school performances, somebody’s suddenly talking about getting a grenade.

This is also the part of the film that doesn’t quite deliver. Instead of digging deeper into the characters’ restless minds and building a stronger case for empathy, it relies perhaps too heavily on the viewer’s knowledge of that era: its politics, general atmosphere and sentiments. The suffocation of living under ideological, totalitarian rule, where both the Beatles and the Bible are considered propaganda materials, is not conveyed with enough detail or force to sell the radical reaction it provokes. Besides a loss in dramaturgic value, character development suffers as a consequence, seeing how we don’t really get to reconcile the different aspects of the protagonists nor feel for them as fully fledged human beings.

That said, Gigineishvili proves to be a skilled storyteller, pushing things forward with barely a hiccup, especially acing the hijacking scenes. As the unquestioned centerpiece of the film, the near half-hour reconstruction of how it all went down – from the group’s arrival at the Tbilisi airport to the bloody outcome of a tragic night – dominates the entire second act. Aided by superb production design that renders the terminal building and the plane itself wonderfully, authentically aged, the scenario plays out with utter believability. The action choreography also excels; from within and without the cockpit, from down on the tarmac and inside a still landing aircraft, attacks and counterattacks are launched in ruthless, frighteningly truthful ways. Without lazy explosions or over-the-top CGI, you actually see the insane danger of the situation. The precise, never panicky editing must be credited as well for shaping, containing, heightening the delicious tension throughout.

Then there’s the real star of the show: Russian cinematographer Vladislav Opelyants. If Hollywood hasn’t already set their sights on him yet (he shot the acclaimed Cannes title The Student last year), they should now. Swift but clear-eyed, it’s a harrowing experience to witness and be part of the mayhem through his lens. He doesn’t just know how to shoot big action sequences either. The way he works intimate spaces and captures a dynamic sense of movement within them is equally impressive, as evidenced by a long, unbroken take of Nika leaving his house in the middle of a busy party. But also just in general, the optical quality of Hostages ranks among the best of the fest, thanks to those sprawling panoramic shots and a nostalgia-tinged color palette.

Considering how Nika and his friends, along with millions others growing up in the Soviet Union, must have felt being held hostage themselves — by their own homeland — the film’s premise offers more political and personal ground to cover than was eventually taken advantage of. But in terms of staging a high-stakes escape with retro flair and nail-biting suspense — sorry, Argo who?