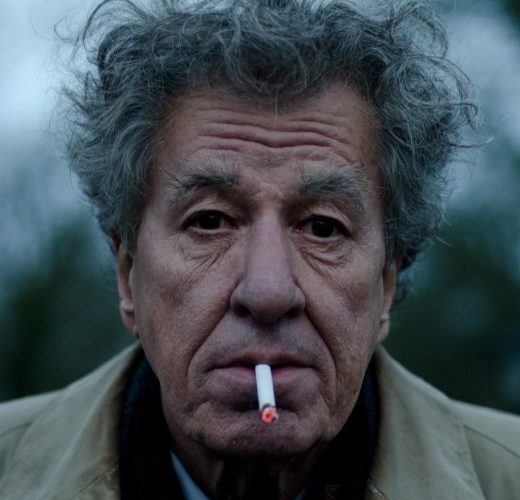 Enough footage of Alberto Giacometti exists to suggest that Geoffrey Rush is quite uncanny as the renowned surrealist sculptor in Final Portrait, a depiction of the seventeen days it took him to paint his last portrait, that of the American writer James Lord (played here by Armie Hammer). Based on Lord’s resulting 1965 book A Giacometti Portrait, it’s an elegant if somewhat unambitious piece of biographical work from writer-director Stanley Tucci, who has created — along with cinematographer Danny Cohen and art designer David Hindle (who worked with Rush before on Tom Hooper’s The Kings Speech) — a chicly grim vision of some of the shadier corners of the 1960s Parisian art scene.

It must be said that Hammer looks right at home smoking a cigarette in a beige trench and black-tie suit (had he been born ten years earlier he might have given Jon Hamm a run for his money on Mad Men). Capping an impressive last few months for the actor (including Luca Guadagnino’s Call Me By Your Name and Tom Ford’s Nocturnal Animals), Hammer plays the aforementioned Lord, a writer who traveled to Paris in 1962 to be painted by the Swiss Italian surrealist artist Alberto Giacometti. We begin on his first day as Giacometti’s model and while the script is unclear as to how exactly he came to be in Paris, we are constantly reminded that he has to get back to the States quite soon. The key conflict here is found in whether or not Giacometti will ever get the damned thing done. Alberto claims it’s both “impossible and meaningless” to try to finish a portrait and so James is forced to continually prolong his stay in the French capitol as his frustrations grow towards his hero’s idiosyncrasies.

Cohen shoots it all in murky grays and greens, a color palette that is never broken with the exception of the appearance of the artist’s long suffering wife Annette Arm (Sylvie Testud) in a friendly yellow jacket as well as a scene, later on, when his muse & courtesan Caroline (Clémence Poésy) shows up in a bright red BMW. Indeed, his attitude towards the opposite sex is examined somewhat unambiguously throughout, making reference to his appetite for prostitutes as well as a quite shocking piece of dialogue that mentions a dream about raping and murdering two women. Caroline is Alberto’s key distraction and, thus, the source of much of James’ grief. He takes solace in the company of the artist’s younger brother Diego (Tony Shalhoub), who also worked with sculptures just next door to Giacometti’s studio.

It takes eighteen days (although Tucci bundles the last three together in a peculiar montage) for the painting to be completed — to some degree at least. One can find it listed for $20 million on the Christies website, an irony which one feel would not have been lost on the old curmudgeon. Tucci goes into Giacometti’s anarchic relationship with money, showing him tossing around stacks of Francs in his cluttered office and paying off Caroline’s pimps for the foreseeable future. But we are also shown Alberto the capitalist, flogging old sketches to private collectors from apparently random stacks of sheets. It’s a fine example of the great contradiction of the post ‘60s successful artist, a syndrome which has plagued the art world ever since.

With its limited cast and locations, there’s the sense that Final Portrait could be brought to the stage with great ease, but it could also work well as a trimmed-down short film. In full flight, Rush is a joy to watch, no doubt, but the unavoidable sense remains that Tucci is stretching his material a little thin, restricting the narrative to the two-weeks-plus Lord spent in Paris with nothing on either end to really fill us in. We learn very little about James Lord and one might be left wondering about who exactly the man is. In order to break from their sessions, Lord and Giacometti used to take walks in the cemetery Montparnasse, which was located just down the road from his studio. In the film, Rush uses these strolls to flesh out his character, retelling the artist’s anecdotes and opinions on his contemporaries from the period. It’s scenes like these that leave the viewer wanting more from Rush’s Giacometti and, indeed, as the credits role, Final Portrait itself feels somewhat unfinished. Portraits can be that way sometimes. Biographical films should, perhaps, be a little more definitive.