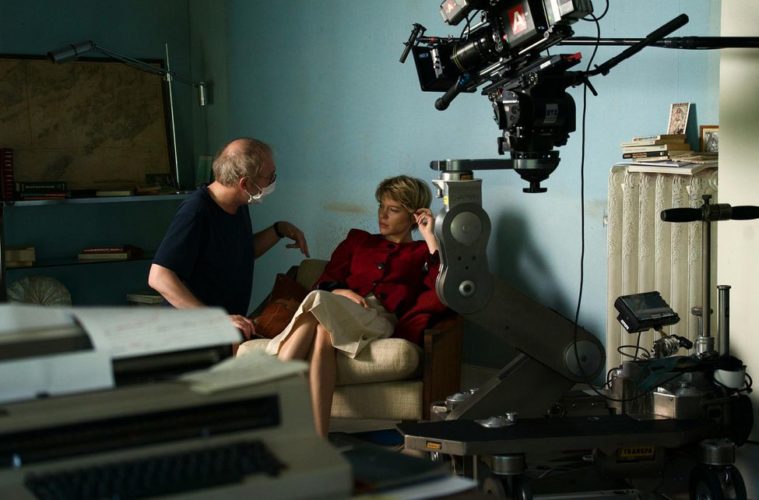 Every one of our conversations with Arnaud Desplechin eventually leads to Philip Roth. As far back as 2015 he told me of ambitions to adapt the author’s 1990 novel Deception, a play-like dialogue between an American author (very heavily based on Roth) and his lover—which sounds simple enough, and in most hands would be, but for Desplechin its period-piece aspects seemed an insurmountable hurdle. (To which end he said, “Perhaps it’s a book that I will never be able to adapt for the screen, and I know I will regret it for the rest of my days.”) Shortly thereafter he told us the following:

“This book fascinates me because it’s just pure dialogue — the most beautiful dialogue I’ve read between a man and a woman. The film, it’s about intimacy — so how are you dealing with a worldwide political issue when the film is dealing with intimacy? So today, I guess, my perspective is that it would be a wonderful thing, but I’m not sure the screen would be the perfect tool. I’m always wondering if it would not be a perfect theater play. I did this production for the stage in France last year. I’m wondering if I could transform it into a show, but onstage rather than onscreen. So I’m still dealing with that.”

Lockdown and its time for rumination finally paved the way: speaking to Libération (via Cineuropa), Desplechin announced he’s completed shooting of an adaptation with Léa Seydoux, Denis Podalydès, Emmanuelle Devos, and Gennadi Famin. Co-written with Julie Peyr, it finds “two heroes [who] were trapped in the writer’s study, in the same way that we were confined by lockdown […] Deception takes place in a time which now seems idyllic, before the Twin Towers collapsed and before the fall of the Berlin Wall, and it features refugees, notably women from the East.”

Yorick Le Saux (Personal Hopper, High Life, Little Women) shot the film, currently in editing and to receive French release by Le Pacte. To these eyes, everything in 2021 moves back one spot on the most-anticipated list.