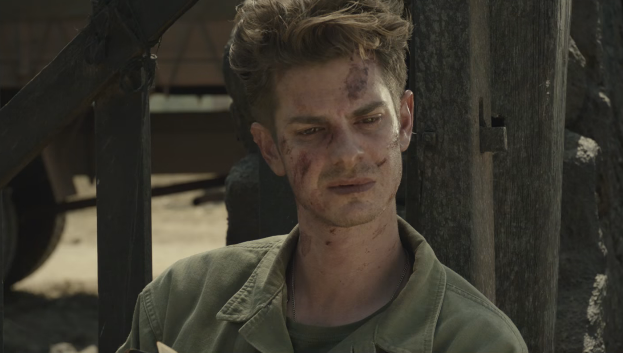 While Mel Gibson slowly tries to rebuild his acting career, he is also stepping behind the camera again to continue his directorial efforts before he takes on the sequel to The Passion of the Christ. The first trailer has been released for his World War II biographical drama, Hacksaw Ridge, which will premiere at Venice and centers around the real life army medic Desmond T. Doss (Andrew Garfield) who became the first Conscientious Objector to win a Medal of Honor after he refused to kill enemy troops during the Battle of Okinawa.

Garfield looks rough and war-worn, yet with a ray of hope glinting in his eyes as he traverses the battlefield and goes behind enemy lines to save fellow soldiers. Say what you will about Gibson, but he’s proven he can stage a hard-hitting battle sequence while retaining an emotional connection amongst the bloodshed with efforts like Apocalytpo and Braveheart, and this could be a successful continuation of that theme.